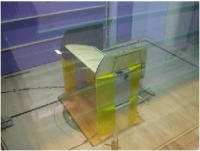 Lunderskov, Denmark [RenewableEnergyWorld.com] For some years, the Wind Energy Division at Risø DTU has been working to develop a method for controlling the loads on large wind turbine blades using a flexible trailing edge made of an elastic material which can be controlled by means of compressed air or hydraulics. Now, the invention, which has been called CRTEF (Controllable Rubber Trailing Edge Flap), has been tested in a wind tunnel with promising results.

Today’s wind turbine blades, which can measure more than 60 metres in length, are subjected to enormous loads, which means that a blade can flex as much as 4-6 metres during strong gusts. However, the blades are also so long that there can be considerable differences in the loading from the gusts along the blade. In wind farms, surrounding wind turbines also exert considerable influence and generate turbulence, which has a more localized effect.

“It is these local influences which we hope our design will help mitigate. However, in addition to our rubber trailing edge, it also calls for effective sensors and control systems which can tell the system to regulate the flaps according to the local wind conditions along the blade. Right now we are looking at different types of sensors and a trailing edge made of plastic instead of rubber,” explains Research Specialist Helge Aagaard Madsen.

In December 2009, the rubber trailing edge was tested in the open jet wind tunnel at the company Velux in Denmark. The test marked the end of a development process which was initiated in 2006. It started with a GAP funding project which ran from 2007 to 2008 and confirmed the operating principle. This was followed by the current project in 2009, supported by Region Zealand, where the rubber trailing edge was tested in the wind tunnel. Along the way, many different prototypes have been developed and manufactured at the Fibre Laboratory at the Materials Research Division at Risø DTU, which also has been part of this development process.

“The operational principle which we have arrived at is very simple and robust, and we also believe that the manufacturing process will be so. The wind tunnel test showed, among other things, that the outward curve of the flap does not change markedly when subjected to wind loads similar to those on a real turbine blade. In addition, we measured the correlation between the deflection of the flap and the change in lift on the blade section. This produced figures which we can enter into our calculation models and then realistically simulate how the flap will reduce the loads on the turbine,” says Helge Aagaard Madsen.

“A further bonus of our design is that the molded rubber trailing edge gives us a sharp edge which produces less noise and greater output. As most blades today are manufactured in two halves and afterwards joined together, the trailing edge will always have a certain thickness. The trailing edge is then ground to make it thinner, but with our design, the blade automatically gets a completely sharp edge.”

Up to a Moderate Gale

The test facilities at Velux have been used in the past to test wind turbine blade profiles, so it was obvious that the design should be tested here. In the wind tunnel it is possible, among other things, to regulate the wind speed, and the blade profile can be turned to simulate a change in wind direction in relation to the profile.

The test set-up consisted of a two-metre-long blade section with a total chord of one metre and a 15 cm rubber flap covering the entire span. The blade incorporated a pneumatic system for controlling the flexible silicone material which the trailing edge is made of. Finally, two sensors were attached to the front of the blade which measured wind direction and speed.

“So far there has been focus on demonstrating and testing the operating principle, but now where we can see that it is a robust and reliable model, which can withstand the strong wind loading, we can start to focus more on optimising the design and working towards a full-scale version,” says Helge Aagaard Madsen, adding that one of their concerns was whether strong gusts of wind would counteract the deflection of the rubber trailing edge, which the compressed air caused. But fortunately it was not the case.

The force which the blade is exposed to is based on measurements of the surface pressure across the blade section. The difference in the force on the upper side and lower side of the blade clearly indicates how the movements of the rubber trailing edge can regulate this force and thereby compensate for the fluctuating forces to which a blade is otherwise subjected because of wind gusts.

“Among other things, we investigated how quickly the rubber trailing edge could regulate, and we tested the flaps to a frequency above 2 Hz. Today, pitch is regulated by turning the entire blade around a bearing at the hub, but this has limitations due to the blade weight of several tons but also because a distributed, variable regulation along the blade is not possible. Consequently, we believe that the control with flaps can supplement the slower pitch regulation really well,” explains Peter Bjørn Andersen.

A Step on the Way to Full-scale

Now that the operating principle has been thoroughly tested, the next step in the project is to develop the technology towards a stage where the rubber trailing edge flap is ready for testing in a full-scale prototype model. The researchers will work on optimising the design so the deflection will be as big as possible for a given pressure in the voids within the trailing edge. Durability is another important issue, as is developing systems for supplying compressed air or hydraulic power.

“We are in contact with a number of companies who are interested in working with us on these issues, and it is vital for the further development of the technology that we involve industry as this is where the systems will be manufactured at the end of the day. The plan is thus to launch a new development project which involves close corporation between on one side the research groups at Risø DTU in the Wind Energy Division and in the Materials Research Division and on the other side these companies in order to bring the rubber trailing edge flap technology to a stage where it is ready for testing on a full-scale wind turbine,” concludes Helge Aagaard Madsen.