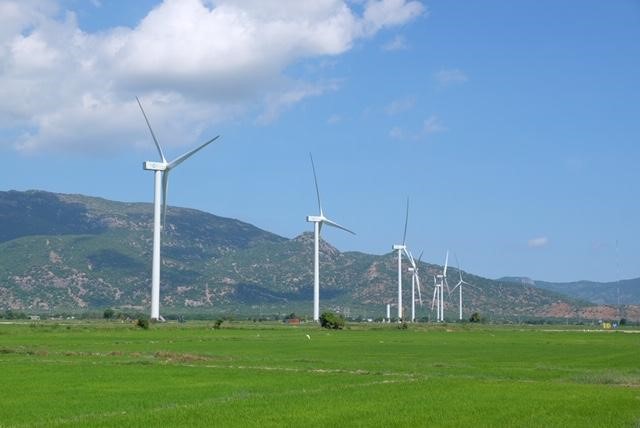 Photo by The Blue Circle

The first phase — comprising three G114-2.625-MW turbines from Siemens-Gamesa – was completed in October 2017.

By adding 12 turbines this year to the original three, the Dam Nai Project is now the largest onshore wind power plant constructed in Vietnam, with 40 MW installed capacity. Commissioning of the turbines will take place this month and commercial operations are expected to start in December.

“Construction of the Dam Nai Project Phase 2 has been carried out with huge pressure coming from the imminent arrival of the monsoon season, which starts in November, when high winds would have prevented the erection of the largest rotors in Vietnam,” said Olivier Duguet, chairman and chief executive officer of The Blue Circle. “Our teams, together with Siemens-Gamesa and partners, have done a fantastic job to achieve the construction of what is now Vietnam’s largest onshore wind power project.”

The Dam Nai site has one of the best wind resources of South Vietnam, having been selected after intensive meteorological mast trials, as it’s situated in a corridor between mountains open to the Northeast monsoon wind. Situated in the middle of rice fields, special attention has been given to the project’s impact on water management, on top of community engagement. Professional management has been applied to water irrigation around the power plant, which, in certain cases, has enhanced the water supply for rice farmers in the area.

The site has the potential for total installed capacity of between 80 to 120 MW and The Blue Circle will continue with further developments in the area.

The Blue Circle has other sites under development in four Vietnam provinces, with the potential to install 700 MW of wind energy capacity.

Invenergy scores $3b investment from Blackstone