Innovation does not need to be cutting edge, it only needs to solve a problem: three reasons why wind energy is borrowing solutions from the construction sector.

The global onshore wind sector is expected to grow 19% per year till 2015. Not as much as it has grown in the past (28% per year from 2006 to 2011) but still very respectful for a sector that is rapidly approaching market maturity (Exhibit 1). One of the key drivers fueling this growth is LCoE (Levelized Cost of Energy*) reduction, either by improving efficiency or by decreasing costs. Concrete towers do not contribute to the former, but can contribute to the latter. 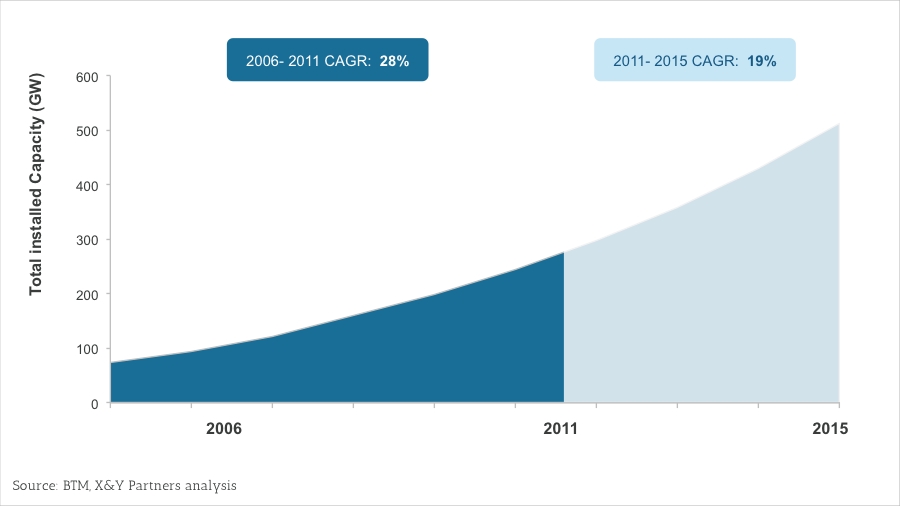 A wind tower is not the first thing that comes to mind when thinking about technological developments in wind energy, as its impact on system performance is very small. However, wind towers can represent more than 25% of the total WTG (Wind Turbine Generator) cost (Exhibit 2), which makes them a relevant area for cost optimization. 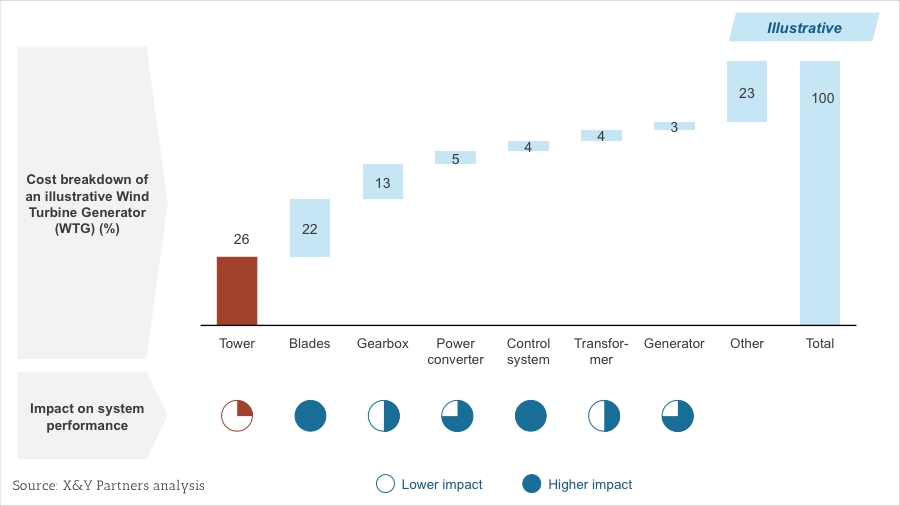 The ubiquitous steel tower already benefits from a level of steel manipulation and optimization far above those of most sectors, leaving limited room for improvement. The use of alternative materials, particularly concrete, seems to be a viable alternative for cost optimization (Exhibit 3). Two distinct designs are currently commercially available: full concrete designs, developed by companies such as Enercon (a German turbine manufacturer and systems integrator) and Inneo (a Spanish tower manufacturer); and hybrid systems (which combine a steel tower with a concrete pedestal), developed by companies such as ATS (a Dutch tower manufacturer) and Tindall (a US manufacturer of precast concrete products). 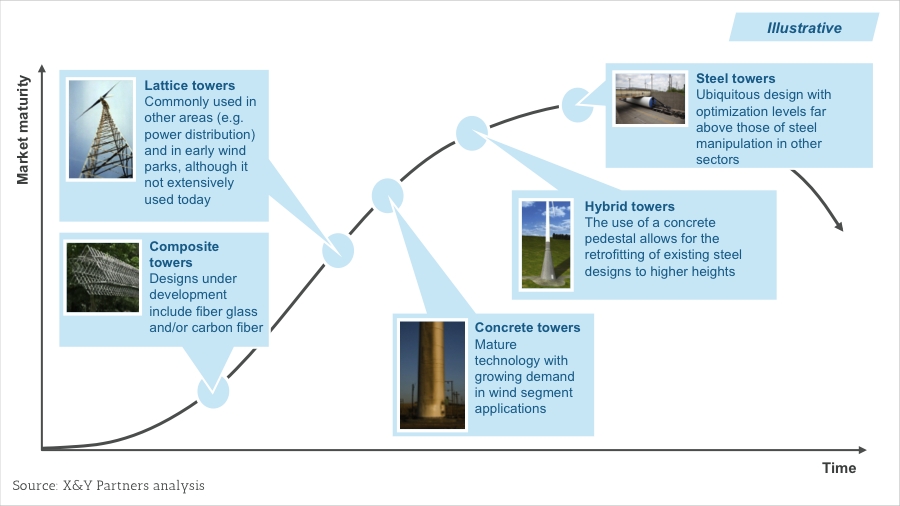 Our forecasts suggest a slow but firm introduction of hybrid and concrete towers, resulting in a 2015 market share of 3 and 6%, respectively (Exhibit 4). 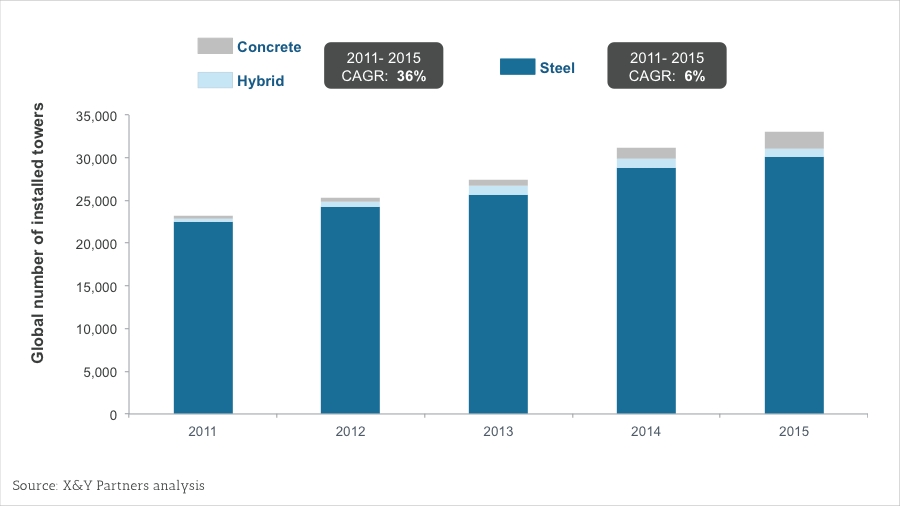 We believe there are three fundamental reasons for this to happen:

The average turbine size of new wind parks has steadily increased over the years (Exhibit 5), in an effort to reduce LCoE. Larger turbines are heavier and have larger rotors, requiring taller and more robust towers. 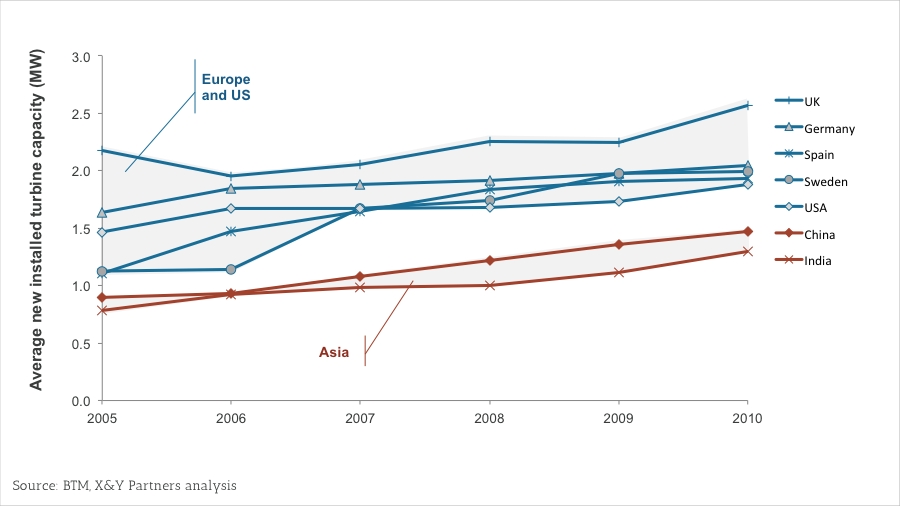 Concrete advocates claim that steel towers are not cost-effective above 90-100m, mainly due to its inherent limitation in tower diameter (tower sections need to be transported by road, limiting its maximum diameter to road width), which creates stiffness issues and requires deeper foundations. Concrete does not have this limitation, as larger diameter towers can be built on-site or made up by smaller precast semi-circular sections. A sample of the current offering of turbine-tower combinations seems to corroborate these claims (Exhibit 6). 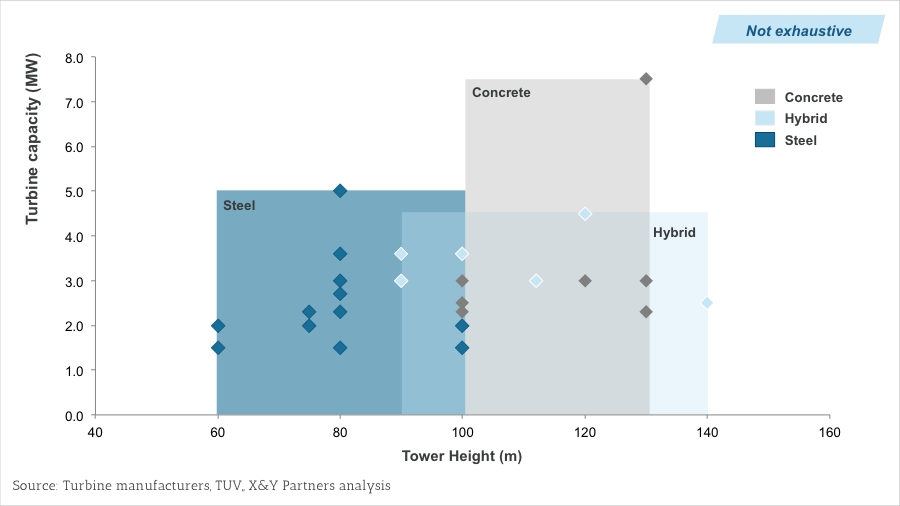 Steel prices have historically been more volatile than concrete prices, particularly in recent years (Exhibit 7), while sourcing in the wind sector is increasingly dominated by framework agreements and long-term contracts, pressuring companies across the value-chain to favor stability over volatility. 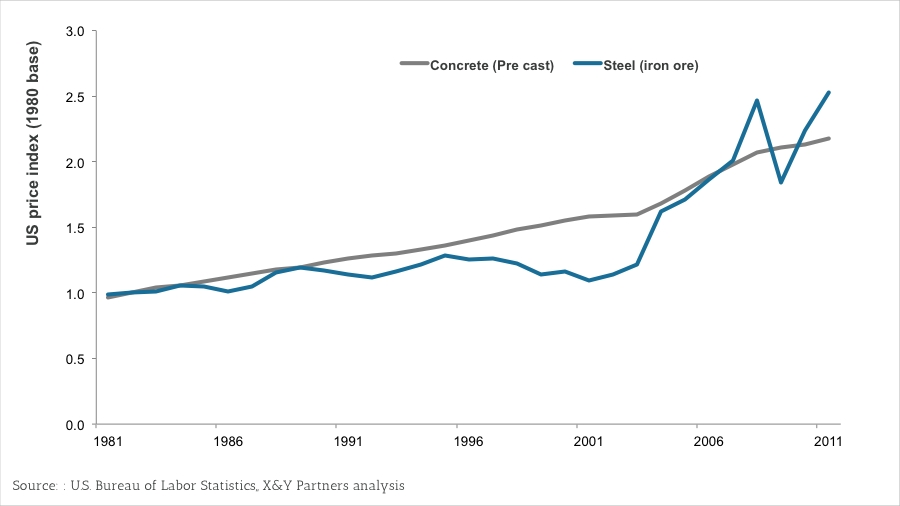 While Europe and the US will retain an important role in new wind capacity, emergent markets such as Latin America, Africa and the Middle East are expected to grow at a faster rate (Exhibit 8), assuming an increasingly important role in the global wind sector. 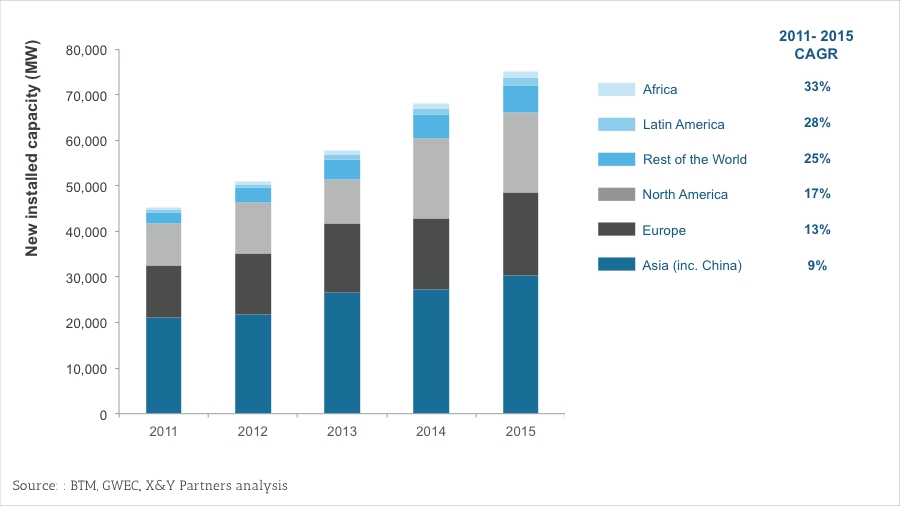 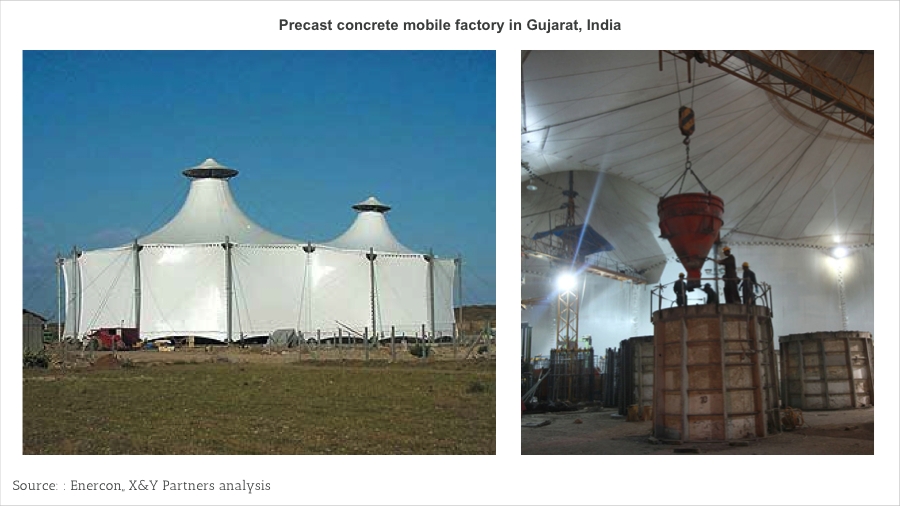 On a final note, you might be asking yourself why we predict that in the short-term hybrid towers will have a higher market share than concrete towers. After all, hybrid towers seem more complex to design, manufacture and install. Currently they hold however an important advantage over full concrete designs: the existing overcapacity in steel tower manufacturing (Exhibit 10). Hybrid towers allow for the reuse of existing steel tower designs and manufacturing capacity, which will accelerate its short-term market penetration. In the longer-term, once new turbine-tower combinations reach the market and the steel tower surplus is resolved, we expect full concrete designs to be favored over hybrid designs. 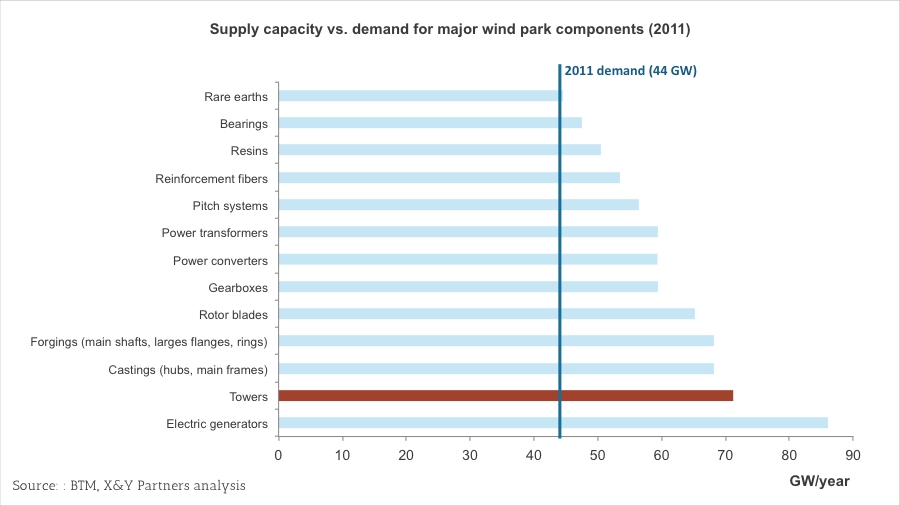 (*) LCoE is the price at which electricity needs to be generated to achieve break-even over the lifetime of the project. LCoE is a metric commonly used to compare different projects and energy sources.

This article was originally published in X&Y Partners blog.