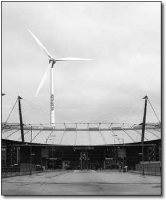 Manchester, England [RenewableEnergyAccess.com] Manchester City Football Club’s commitment to clean energy will be hard to miss as the club arranged for Ecotricity to erect a commercial scale wind turbine on-site at the stadium.

The SportCity Wind Turbine project is a global first in sporting history, and will single out the city of Manchester stadium as the only sporting arena in the world to have its own commercial wind turbine installed on-site. Excess power from the turbine will also be used to supply energy to the homes of people in East Manchester. Switching to a green energy supplier is the biggest single contribution an individual or business can make to help reverse the onslaught of climate change, says Ecotricity. This was a point that helped sell the project to the city of Manchester. “At a time when the subjects of climate change and carbon emissions are dominating the headlines and the thoughts of the world’s most powerful leaders, I am proud that Manchester City is playing a significant part in safeguarding our environment,” said Manchester City’s chief executive, Alistair Mackintosh. “The carbon emission savings from the SportCity turbine would be equivalent to that of at least 2,000 homes and would really make strides into the long-term goal of making Manchester a truly green city.” The Manchester City Football Club has engaged in extensive local consultation in the past 12 months, which will now be followed up with a series of formal consultation processes. Planning consent will be sought in the autumn, and if agreed, the turbine should soon be delivering energy to the people of East Manchester.