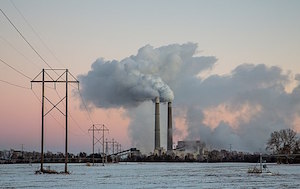 Coal will be increasingly squeezed out of the power generation market over the next three decades as the cost of renewables plunges and technology improves the flexibility of grids globally.

That’s the conclusion of a report by Bloomberg New Energy Finance, which estimated some $11.5 trillion of investment will go into electricity generation between now and 2050. Of that, 85 percent, or $9.8 billion, will go into wind, solar and other zero-emissions technologies such as hydro and nuclear, the London-based researcher said.

Better batteries, which allow grid managers to store power for times when it’s neither breezy nor sunny, will allow utilities to take advantage of plunging costs for solar panels and wind turbines. The ability of natural gas plants to work at a few minutes notice means the fuel will become the choice for most utilities wanting guaranteed generation capacity.

“Coal emerges as the biggest loser in the long run,” said Elena Giannakopoulou, head of energy economics at BNEF. “Beaten on cost by wind and PV for bulk electricity generation, and by batteries and gas for flexibility, the future electricity system will reorganize around cheap renewables.”

The chart below shows renewables taking dominant market shares in all of the world’s biggest electricity markets by 2050, reflecting both government policies to curb emissions and improving economics for wind and solar. 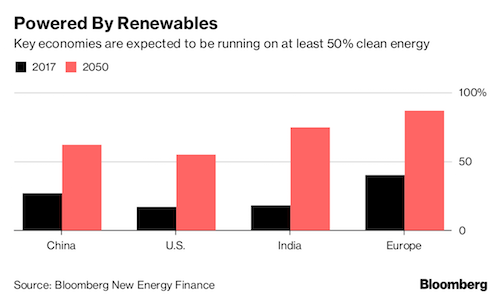 BNEF’s forecasts compare with International Energy Agency’s most optimistic scenario for electricity generation, envisioning clean energy and fossil fuels reaching parity at 50 percent of the market each in 2025. The Paris-based institution’s central forecast puts the two on par by 2040, and fossil fuels would retain about a two-thirds share of generation by then if governments make no further steps to tighten regulations, the IEA says.

BNEF’s outlook shows renewables are likely to end up dominating power generation by 2050, taking about the same share of the industry then that natural gas and coal enjoy now.

BNEF’s scenario, set out in a 150-page annual report drawing on the expertise of 65 analysts worldwide, is based on country-by-country modeling of how the electricity market will evolve as well as forecasts for costs of different power generation technologies.

Gas will keep much of its market share, BNEF says. The nature of plants being built in the future will shift to peaker units that utilities can switch on and off quickly and away from the baseload plants that tend to operate around the clock. The chart below shows BNEF’s forecast that utilities will burn much less coal over time. 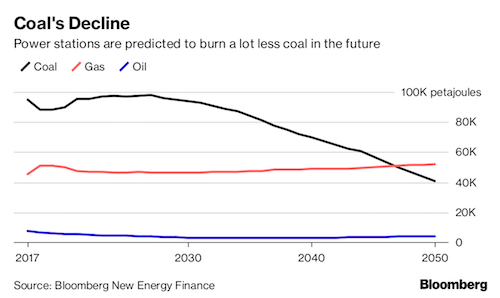 The decline of coal won’t be enough to dramatically alter the picture for a gradual increase in global temperatures in excess of the threshold of 2 degrees Celsius since pre-industrial times that has become the United Nations climate target.

“Even if we decommission all the world’s coal plants by 2035, the power sector would still be tracking above a climate-safe trajectory, burning too much unabated gas,” said Matthias Kimmel, energy economist at BNEF.

Even without tighter environmental rules, renewables will be increasingly attractive to utilities if only because of their falling costs. Building wind and solar farms will become much cheaper by 2040, according to the BNEF estimates, while traditional nuclear and coal projects become more costly.

With solar energy, the amount of capacity being installed is rising as overall capital costs decline, BNEF estimates. The chart below shows investment in photovoltaics peaking in the 2030s and declining in the decade after, while the capacity that investment buys remains strong. 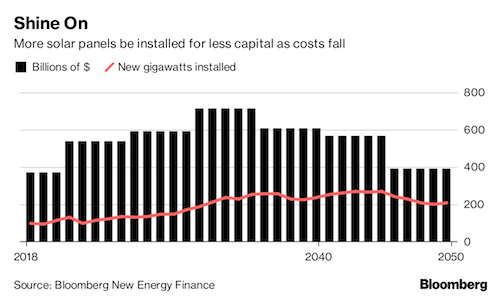