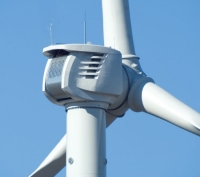 California, US United Technologies Corporation (UTC), a provider of high-technology products and services to building systems and aerospace industries, is to buy the remaining shares in the company at 65 pence (103 cents) a share, Clipper announced on 18 October.

The California-based turbine maker said the deal would enable Clipper “to fully leverage UTC’s management and operational expertise as well as its advanced technology in blades, turbines and gearbox design”.

“In the context of the challenging environment that Clipper has faced in recent years, we believe that the transaction represents good value for our shareholders and provides substantial benefits for our customers and employees,” said Clipper president and chief executive Mauricio Quintana in a statement.

Industrial giant UTC bought into Clipper last December, paying £166 million ($270 million) to acquire almost half the company. But the turbine maker’s order book has since thinned, cutting the value of this investment.

In the first half of 2010 Clipper sold only 43 turbines, down from 127 in the same period of last year. In its first-half results announcement Clipper said “the current business circumstances create a material uncertainty that casts significant doubt on the Group’s ability to continue as a going concern.”

Clipper makes wind turbines for plants in the UK and the US. The company is headquartered in Carpinteria, California, and has manufacturing plants in Cedar Rapids, Iowa, and in Newcastle in the northeast of the UK.

The firm’s UK factory is currently engaged in the Britannia project to create the world’s largest turbine with a 10 MW capacity.

By rating Clipper at £139.5 million ($221 million) UTC is giving shareholders a 48% premium on share prices before an approach was made in September.