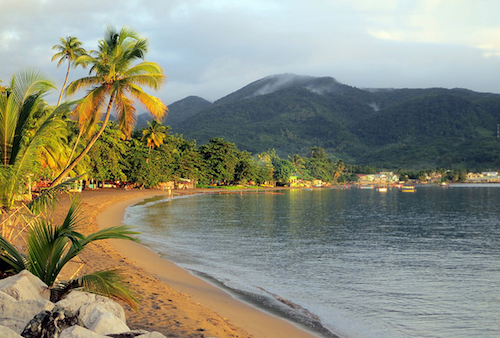 Puerto Rico lost electricity again on April 18, seven months after Hurricane Maria first knocked out the island’s power grid. For people in some remote rural areas, the blackout was more of the same. Their power had yet to be restored.

The dangerous fragility of Puerto Rico’s energy systems has put other Caribbean countries on high alert. Across the region, electric grids are dated, ailing and overburdened — making it easy work for a powerful passing storm.

Caribbean nations also rely heavily on oil and diesel imports to fuel their power plants — a dirty and expensive way to produce energy. So even before the 2017 hurricane season, Caribbean governments were trying to integrate renewable energy sources like wind and solar into their existing grids.

Now that task seems far more urgent. To move beyond fossil fuels, Caribbean countries must transform their energy systems by building in new, greener sources of power. That will also make electric grids more resilient to weather extremes because they will be decentralized — pulling from a diverse array of power sources.

Climate Change in the Caribbean

As an environmental scientist working in Jamaica, I recognize many reasons why the Caribbean region must upgrade its outmoded energy systems. Mitigating global climate change, of course, is a big one.

Unfortunately, I believe that climate change will also complicate the region’s transition toward renewable energy. The Caribbean is comprised of island nations, which are the world’s most vulnerable places when it comes to rising seas, changing weather patterns and other effects of global warming.

The Caribbean is already seeing more weather extremes. Research suggests, for example, that northern Caribbean countries like Cuba, Jamaica and the Bahamas have gotten rainier over the past three decades, though historical data is limited.

The uptick in severe weather is costly. According to the United Nations, the 2017 hurricane season cost Caribbean countries and the U.S. US$92 billion.

As the eastern U.S. and Caribbean brace for a potentially brutal 2018 hurricane season, policy makers are looking for fast ways to strengthen their power grids.

Installing more wind, solar and hydropower — the world’s most reliable and common renewable energy options — would seem to be a more obvious step in the right direction. Between 2015 and 2016, the global capacity of these green power sources rose 9 percent — nearly half of which comes from the widespread adoption of solar panels.

After Maria, technology companies like Tesla saw an opportunity to spotlight their products in wind, solar and geothermal power in the Caribbean.

Tesla installed Powerwall solar-powered batteries across Puerto Rico. This technology has kept the lights on during blackouts at over 660 locations, though experts caution that such solar “microgrids” cannot serve the energy needs of an entire country.

The Problem with Climate Change

But, in a Caribbean of increasing weather extremes, these green energy systems are themselves vulnerable.

Modern wind turbines, for example, were first engineered in Europe — a region that rarely experiences Category 5 hurricanes. Wind speeds above 165 mph would tear the turbines apart.

Climate change is a profoundly unpredictable process, though. That makes it harder for weather models to correctly identify which renewable energy infrastructure should be built where.

Climate change, which affects various parts of the world differently, makes it even harder to accurately predict future weather scenarios. Comprehensive modeling systems that use LIDAR and other remote-sensing technologies do better, but they are too expensive for widespread adoption in the Caribbean.

The Future Is Now

The Caribbean is making progress in planning for a future of more renewable energy, though.

So will a new climate model developed by my colleagues at the University of the West Indies. The system, called SMASH, can aid planners in siting wind farms and predicting the path and severity of the hurricanes that could mangle turbines.

Cutting-edge hydropower plants that run on urban wastewater may one day also address the current limitations of hydropower in the Caribbean. Many small islands lack the big rushing rivers that allow water to be a meaningful power generator.

Wind farms, too, are adapting to the instability of this changing climate. Once firmly pegged to the ground, turbines can now float thousands of feet above the land, spooled out like kites to capture winds where they blow hardest. Floating turbines will also fare better during hurricanes.

All of these technologies may eventually help Caribbean countries navigate their way through climate change toward a real renewable energy boom. But the climate change conundrum won’t be solved before the 2018 hurricane season hits.