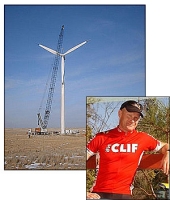 While wind power has grown increasingly competitive with traditional fossil fuels, it often takes some preemptive support to make the capital-intensive projects a reality. Often the most effective support is through the purchase of green tags, or Renewable Energy Certificates (RECs). Companies across the globe have increasingly factored this option into their corporate responsibility campaigns. The Clif Bar company was recently honored for being one of these companies for their help supporting the construction of a 750 kW wind turbine in South Dakota.

Los Angeles, California – March 25, 2004 [SolarAccess.com] Clif Bar Owner and CEO Gary Erickson was Global Green USA’s recipient of the 2004 Green Cross Millennium Award for Corporate Environmental Leadership, recognizing his company’s efforts to use renewable energy, eco-friendly packaging and organic ingredients. “Gary’s deep commitment to the environment shines through both in and outside the workplace,” said Mathew Peterson, president and CEO of Global Green USA. “He demonstrates that quality products, the environment and social responsibility do go together.” Global Green USA, the U.S. affiliate of Green Cross International founded by former Soviet President Mikhail S. Gorbachev, honored Erickson and other environmental leaders at the star-studded 10th Annual Green Cross Millennium Awards ceremony in Los Angeles last night. Gorbachev, the 1990 Nobel Peace Prize laureate, attended the event and himself was honored with a tribute for his continued efforts toward world peace and sustainability. Other major figures who presented were film stars/activists Leonardo DiCaprio, Angelica Huston and Charlize Theron. Chief among the company’s major commitments towards renewable energy was their strong support of the construction of the first large-scale Native American-owned wind turbine to offset the carbon dioxide generated by the energy used in its offices, manufacturing, and business travel during 2003. The environmental benefit of the company’s offset is equivalent to taking 250 SUVs off the road for a year. They did this through the green tags purchases mentioned earlier. The sale of green tags essentially creates a market for the positive environmental attributes of renewable energy projects, and often helps propel them from the drawing board to construction. Thanks to the efforts of Clif bar, and a few other corporate supporters, the Rosebud Sioux Indian Reservation are the first Native Americans to get the blades spinning on a utility-scale wind turbine. The clean, renewable energy generated by the 750 kW NEG Micon wind turbine will go to the tribe, while a substantial portion of the environmental attributes went to the Clif Bar company. Joining in the fight against global warming as part of NativeEnergy’s WindBuilders program, Clif Bar purchased enough renewable energy credits to neutralize about 2,500 tons of carbon dioxide (CO2) emissions. Carbon dioxide — a by-product of burning fossil fuels such as gas, oil and coal — is the leading contributor to global warming. The company’s staff ecologist Elysa Hammond guided the company’s efforts to take part in the NativeEnergy program. This year the company plans to expand their Green Power program to include the impact of employee commutes. Their climate neutral portfolio will include the purchase of renewable energy credits and the planting of trees to offset their entire CO2 footprint, including employee commutes. It’s also no simple coincidence the Clif Bar company supports Wind Power either. The company is virtually synonymous with the active, outdoor lifestyle. They make a line of energy and nutrition foods – their most ubiquitous product, the Clif Bar, can be found in many a hiker’s pack. The Clif bar company, and many of its consumers make the connection between clean renewable energy, and its ability to provide crucial electricity without the greenhouse gas, and pollution side effects of fossil fuel. As a company that supports athletes and other health-minded people, Clif Bar said they recognize the many health benefits of deriving energy from renewable resources rather than fossil fuels. “This project reflects our company’s ongoing commitment to people’s health and the environment,” Erickson said.