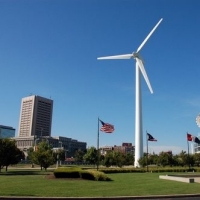 Ohio, United States [RenewableEnergyWorld.com] Message to wind developers: another state stands poised to open its doors for business. For years AWEA has been working to bring wind farm development and construction — along with the accompanying jobs — to Ohio through a variety of state policy campaigns and initiatives. Finally, after many years of hard work, Ohio state policy appears to be at a tipping point that may bring more wind farm construction to the Buckeye State beginning as early as this year.

The first benchmark of major progress came in May 2008, when Ohio enacted the Ohio Advanced Energy Standard, which is often referred to as the Ohio renewable portfolio standard, or RPS. (The RPS term is often used for state renewables targets but is interchangeable with renewable electricity standard, or RES.) Under the RPS, utilities must provide 25% of their retail electricity supply from various clean energy resources by 2025. Annual renewable benchmarks, which began in 2009, increase toward an eventual target of 12.5% of retail electricity sales by year-end 2024. Depending on how much of the RPS is met by each renewable source, one might approximate that Ohio could install 3,000-5,000 MW of wind power by 2024.

So the wind power industry must be taking off in Ohio, right? Wrong. Since the implementation of the RPS in 2008, not 1 MW of wind energy has been installed. In the past several years wind energy installation in the state has come to a virtual halt, with a mere 7 MW being installed between 2003 and 2004 (all at a facility in Bowling Green). Thus, for the wind industry, the Ohio RPS remains only an opportunity still waiting to be seized.

Things may be changing. Efforts are well under way to remove barriers never intended to get in the way of the wind power industry. The barriers in Ohio, along with the recent activity in the state capital of Columbus to eliminate them, shows how various policies must work in tandem in order for renewables targets to work effectively.

The major obstacle standing in the way of Ohio realizing its renewables potential and landing the associated economic benefits is an old tax code, which AWEA is working to reform. In its current form, the Ohio property tax runs approximately $40,000 per MW. Developers have found that rate in itself to be prohibitive to building wind farms but, to make matters worse, the rate is also four times the tax rate of neighboring states Michigan, Pennsylvania, and Indiana. That makes it tough for a state to foster its own wind power industry.

Over the course of the past year, AWEA has been working to coordinate a policy campaign with the goal of bringing Ohio wind development property taxes in line with neighboring states. During this campaign, AWEA, the office of Governor Ted Strickland (D), and members of the state legislature have had open conversations about the benefits of wind energy projects. To help communicate those benefits, AWEA provided an arsenal of economic development data and job creation statistics associated with wind farm construction, manufacturing, and operations and maintenance.

Following AWEA’s coordinated education campaign, Strickland made the following statement in his January State of the State Speech, as part of his broader effort to ease Ohio’s 10.8% unemployment rate:

The fact of the matter is that Ohio’s tax structure discourages wind and solar companies from coming to Ohio to generate renewable energy. We should give those companies every reason to choose Ohio. That’s why I am asking the legislature to erase Ohio’s tangible personal property tax on generation for wind and solar facilities that break ground this year, create Ohio jobs, and begin producing energy by 2012.

And we will no longer be shy about our place at the forefront of the energy revolution.

A speech, of course, is mere words; the actions that follow are what counts. But in fact, with those remarks, Strickland may have set in motion the future of Ohio wind project development.

Action in the Legislature

In the short time since the speech, Strickland’s words are counting in a concrete way, with Ohio now a step closer to realizing the potential of its RPS. Just in the past month, bills have been introduced in both the state House and Senate that in their current form are very close to trimming Ohio’s taxes to a level at which developers can build and operate projects.

Senate Bill 232, introduced by Republican Senator Chris Widener, exempts projects from real and tangible personal property taxes and calls for a payment in lieu of taxes (PILOT) of $7,000 per MW. Additionally, the bill requires Ohio projects to meet a predetermined level of direct jobs based upon individual project results, using the National Renewable Energy Laboratory’s Jobs and Economic Development Impact Model (JEDI Model). Under SB 232, a developer must start construction or file an application with the Ohio Power Siting Board by the end of 2011 and place the project in service by the end of 2012.

House Bill 464, introduced by Democratic Representatives Roland Windburn and Debbie Phillips, exempts developers from tangible personal property taxes (real property remains) and requires that 50% of the direct project jobs go to Ohio residents. Additionally, the bill requires a tiered approach for its PILOT program. Depending on the percentage of direct jobs created for Ohioans, a project development would be required to pay $6,000-$8,000 per MW. Bill 464 also requires project developers to pay a prevailing wage, set a 10% minority workforce goal, and establish an education and training program with a local accredited Ohio university. Under the bill, a developer must start construction by the end of 2010 and place the wind farm in service by the end of 2012.

Together, these bills represent a significant step forward for Ohio wind power development.

Seemingly signifying the possible tipping point for wind power in the state, just this week the Ohio Power Siting Board approved three wind power projects; three more projects have cases pending before the board. Combined, the six projects total 1,100 MW and represent a significant investment in local wages, salaries, and economic activity.

The projects have the potential to create over 6,000 direct, induced, and indirect jobs in the construction, transportation, and manufacturing sectors throughout rural Ohio communities — many of which desperately need such economic development.

Currently AWEA is working with the various stakeholders throughout Ohio to find a middle ground between HB 464 and SB 232. If the process is navigated successfully, AWEA hopes to have the Ohio General Assembly pass a bipartisan bill in the next few months. With that, the wind power industry could get to work on meeting Ohio’s RPS — as well as the electricity demand of the state with the nation’s fourth greatest energy appetite.

Brad Lystra is manager of economic development partnerships at AWEA.

This article first appeared in the March 2010 issue of Windletter and was republished with permission from the American Wind Energy Association (AWEA).