New Hampshire, USA — Northern Mexico is considered to have the world’s third greatest solar insolation potential, with areas estimated to have about 5 kWh/m2 per day. With resources 60% greater than those of Germany, less than 1% of Mexico’s land area would need to be developed to power the entire nation, according to the Secretaria de Energia de Mexico (SENER), Mexico’s energy ministry. Meanwhile, growth in the nation’s electricity needs is expected to average 6%-7% year-on-year, with even higher growth rates in more populated areas. With such promising potential and a steadily growing need for power, why isn’t the nation a solar front-runner?

Historically, Mexico has been the seventh largest oil producer in the world. Oil remains a critical resource for its economy: about 58% of Mexico’s energy comes from oil and 30% from natural gas, with the rest a mix, including coal, nuclear and renewables. But recent years have brought a decline in oil reserves and an increasing reliance on natural gas imports. The government has also begun to question its reliance on fossil fuels and to consider carbon emissions, for which the country is ranked 13th among nations.

This year, Mexico passed one of the world’s strongest climate change laws, which includes legally binding emissions goals. Provisions include a 30% cut in greenhouse gas emissions below 2000 levels by 2020 and a 50% reduction by 2050. By 2024, 35% of Mexico’s electricity is set to come from renewables, and government agencies are legally bound to adopt them. Though Mexico’s tax incentives are less far-reaching than those in the US, they offer several advantages for solar development, according to Geronimo Gutierrez, managing director of the North American Development Bank (NADB).

‘[There is] an accelerated depreciation programme and a system where you can sell to the grid. You are able to bank energy for a year,’ said Gutierrez. ‘That implies that if you are above what you are expected to produce, and what is established on your power purchase agreement, the CFE [Comision Federal de Electricidad – Mexico’s national utility] will credit that yearly so you can use it later on, which is very helpful.’ 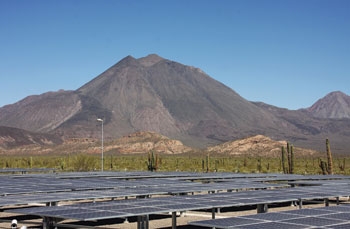 Using the Mexican grid is fairly inexpensive and, depending on the energy’s potential user, tariffs on traditional energy sources will cause prices to rise further, adds Gutierrez. When this happens, it will make sense for companies to use wind or solar. But, currently, there is no specific incentive framework for each renewable source – which is why some are further along than others.

‘Wind is at around 1000 MW under development or in operation already,’ explained Gutierrez, ‘due to favourable conditions and utility-scale operations, though the cost of PV technology has been going down for the past few years, and now it is pretty close to a point where it is commercially feasible.’

There are also some significant obstacles to solar development, such as Mexico’s utility monopoly. For Gutierrez, this is the main difference between the US and Mexico, and brings a degree of regimentation in entering the market. ‘You need [utility] co-operation if you are going to do utility-scale projects,’ he said. ‘But they are increasing their commitment [to renewables].’ In fact, there may soon be an option for smaller-scale projects (up to 20 MW) to collaborate through the CFE. Wider awareness of tax incentives could also overcome reluctance to engage in large-scale or utility projects, added Gutierrez.

Another challenge for the Mexican solar market is a lack of expertise in project development and financing. It is difficult to find bankable PPAs and projects, although solar energy agencies are improving constantly, in part due to the help of the NADB, according to Gutierrez. ‘Since we are a public development bank, we accompany projects more than a traditional bank – meaning that we, to some extent, put the project together, especially when there is no well-developed expertise in the sponsors,’ he said.

Mexico has a huge opportunity for manufacturing solar products. In fact, several plants simply export panels rather than distribute them domestically. Kyocera has its office in San Diego, California, but has a manufacturing plant in Tijuana.

Baja Sun Energy and Arima Solar plan to build a US$500 million, 100 MW plant over the next four years. ‘From our park you can reach most of the western US in less than a day by truck. Talent and tax incentives make this location very competitive to China. Furthermore, products made here can be used for stimulus projects‚Ä¶ We also have green infrastructure including water, waste treatment and LED lighting, more eco-friendly than anywhere else in North America,’ said DJ Hill, CEO of Silicon Border, parent company of Baja Sun.

Not all trends are encouraging. A manufacturing plant that Siliken opened in Mexico in 2011 closed 16 months later and its operations moved back to San Diego. Yet Sussman believes manufacturing holds huge potential for solar in both Mexico and the global market. ‘This is a tremendous opportunity,’ said Sussman. ‘We can save significantly on transportation costs by developing in the Mexican market. People aren’t aware that the Mexican economy has been relatively robust in recent years and there is a lot of manufacturing growth.’

Most solar development in Mexico has been focused on small scale, off-grid rural electrification for the 3% of Mexicans without grid access. More than 80,000 rural systems have already been installed. But interest in developing larger and utility-scale projects is rising, especially in Northern Mexico.

In October, President Felipe Calderon inaugurated a 1 MW plant in Baja California. Developed by Microm, the facility provides an experimental model for the CFE, as the first large-scale plant to connect to the grid. Yet Calderon, while hailing this achievement for Mexico, stressed the need for more grid-connected residential solar. 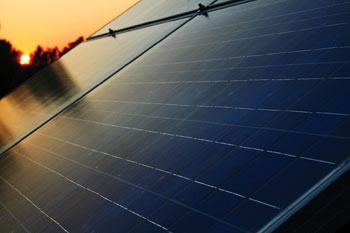 With solar resources estimated to be 60% greater than those of
Germany, less than 1% of Mexico’s land area would need to be
developed to power the entire nation (Conergy)

Big-name companies are also getting involved. Grupo Modelo, a major beer manufacturer and distributor, has already built a 1 MW stand alone system at its Sonora brewery, which is expected to achieve an annual output of some 190 MWh.

Siliken is set to build a 100 MW solar project in Durango. Construction is anticipated to start at the end of 2012, although Siliken is still looking to establish power purchase agreements with companies looking to buy the energy.

SolFocus has announced plans to build a 450 MW concentrating photovoltaic (CPV) plant in Baja California. With its excellent solar resources, this area is seen as a perfect match for CPV. Grupo Musa, a real estate company that partnered with developers SolMex Energy and Synergy Technologies on the project, will purchase most of the power from its initial 50 MW phase.

In addition to project plans, the Mexican government is pursuing a research initiative to determine the country’s actual solar potential. The National Autonomous University of Mexico (UNAM) will calibrate solar sensors at 133 automated weather-monitoring stations. Scientists hope to create an official database to calculate the last decade’s worth of readings from each station.

Many hope that this research initiative is a sign of solar encouragement from the government. For Gutierrez, renewable energy has risen up the government agenda since 1994, when the NADB bank was established. ‘The Mexican renewable market is fairly new. The government and state governments have put in place pretty comprehensive policy to foster the development of clean energy, but nevertheless it is new,’ said Gutierrez.

‘There is a good opportunity to develop the renewable energy market in Mexico in general, especially around the border. There is a good appetite and people are looking to develop because the demand is there. I think there will be a steady growth in Mexico in the renewable energy market. I wouldn’t call it a boom. It is complex to put these projects together, but I think we will see a steady growth in the next decade or so.’

Sussman shares this outlook. ‘I predict a slow and steady growth,’ he said. ‘To move solar along further, I think we could say similar things to what the US needs – we need more specific guidelines for renewable energy programmes, with specifics set aside for solar that we’ve seen in other countries. And the continued economic advantages as prices come down for solar – that is going to be a big incentive.’