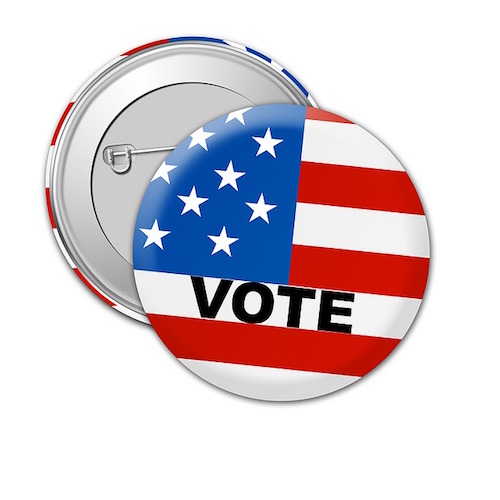 AltEnergyStocks.com endorsed Barack Obama for President in 2008 and 2012.  In those two elections, we based our endorsements on a point-by-point analysis each candidates’ energy policies, favoring the candidate who expressed the strongest support for policies to transition our economy away from its dependence on fossil fuels.

This year, the comparison is so stark, a point-by-point comparison hardly seems worth the exercise. Here are a few quotes from the candidates’ websites that drive the difference home:

Trump: “I think it’s ridiculous, we’ve got bigger problems right now.”
Clinton: “I won’t let anyone take us backward, deny our economy the benefits of harnessing a clean energy future, or force our children to endure the catastrophe that would result from unchecked climate change.”

Trump: Accuses Obama of attacking coal, natural gas, and oil industries. Will “save the coal industry” and rescind Obama’s Climate Action Plan.
Clinton: Says she will:

Much criticism of both candidates revolves around their personalities.  As an investment manager, I’m used to making high stakes decisions about the future actions of a class of people not known for their morals or honesty: CEOs and other high level company management.  I deal with this credibility gap by looking at manager’s incentives, especially their ownership and recent purchases of company stock.  A manager with plans to swindle shareholders will not be a net buyer stock on the open market, which is why I put so much emphasis on insider buying in my stock selection process.

When it comes to selecting a president, it’s possible to take a similar approach.  Do we see signs that a candidate is interested in personal enrichment at the expense of the American people?

The questions about Clinton center around her concealing information (private email server, etc.) and donations to the Clintons’ charity.  At worst, this seems to imply to me that she is willing to stoop to underhanded methods for personal power and influence.  The Clintons can’t spend charitable money (beyond some publicly disclosed perks and salaries) on themselves, although the charity clearly increases their public profiles and influence.  Why does Hillary Clinton want personal power?  To do what she’s been trying to do all along: Use it to make the world a better place, at least as she sees it, and perhaps ensure a place for herself in history.

Trump, in contrast, seems mostly motivated by personal wealth and fame.  Helping people (other than himself and his family) has never been something he even claimed to be interested in before this election.  As with any other CEO, I’m a lot less interested in what he says he is going to do than where I think his incentives are.  In Trump’s case, that is almost certainly the pursuit of additional wealth and fame, and I see no evidence that he is likely to treat the American people any better than the many contractors who worked on his projects and never got paid.  Trump is proud that he was able to use the tax code to avoid paying tax.  Taking advantage of the tax code is something we all do, but few of us are proud of it.  The fact that Trump is proud, perhaps even enjoys taking advantage of the tax code, tells us that he is likely to take every opportunity to make sure as much money goes into his own pocket as possible.

Perhaps you see it differently than I do, so I thought I’d share the opinions of some other financial and clean energy experts.  I sent a note to AltEnergyStocks.com’s regular contributors asking for their opinions.  Some prefer to stay out of politics, but most expressed horror at the prospect of a Trump presidency, even those who have doubts about Clinton.

Here’s what they had to say, in order of brevity:

“Electing Trump would be akin to climate suicide.”

“If Trump gets elected there goes U.S. climate change policy and U.S. clean energy policy. I’m for Hillary 100 percent and happy to say so in any way available. The alternative is akin to climate change suicide.”

“As a registered Republican, I can’t support [Trump].”

“As a registered Republican I cannot endorse this candidate who my party has put forward. Donald has repeatedly indicated that climate change is a ‘hoax,’ both on Twitter and in media interviews. He does not possess the minimum requirements for the position of president of the United States. Hillary Clinton gets my vote this time.”

“There really is only one choice this November”

“Hilary Clinton for President. In the critical climate and economic growth topic of renewable energy, the contrast between Clinton and the GOP nominee could not be more stark.

“Trump has called climate change a hoax, vowed to revitalize coal, promised to break the U.S.’ commitment to the Paris Climate Accords and, perhaps most tellingly, has selected North Dakota Congressman Kevin Cramer as his energy adviser and probable Secretary of Energy. Representative Cramer is an oil and gas industry lapdog and a proud climate skeptic.

“Clinton, meanwhile, has made actual energy expert Trevor Houser her energy advisor (Houser is co-author of Economic Risks of Climate Change: An American Prospectus). Clinton has a policy goal of deriving enough electricity from solar PV to power every home in America within 10 years of her inauguration. She says that’s about half a billion panels or approximately 150 gigawatts’ worth, which is more than three times the capacity the U.S. has installed, ever, up till now. Clinton has said  ‘someone is going to become the clean energy superpower of the 21st century. It’s going to be China, or it’s going to be us.’

“If you care about having a shot at avoiding the worst outcomes of climate change, there really is only one choice this November.”

“Trump is willing to swindle… our country… with a hollow promise of ‘return to greatness.’”

“While I am not necessarily a fan of Hillary Clinton, the choice in this election is clear.  Despite her weak understanding of truth, her persistent lack of good judgment and sometimes sloppy execution, I will be voting for Clinton.

“About 10 years ago I heard Donald Trump described as a ‘preening egotist with a muskrat on his head.’  At the time I thought it was a bit harsh and expressed this view to my daughter.  Her response was ‘he is grotesque.’  As I look back on Trump’s conduct over the past months, it is clear that egotist and grotesque are quite appropriate descriptions.  A vote for Donald Trump is a vote for an opportunist and a bully who has artfully used bigotry to garner support from those who truly do feel left out of the election process.  They are left out for good reason  —  their ideas are contrary to our democratic ideals and otherwise foolish economically.

“Reports that Trump expressed intentions to move forward with a reality TV program from the White House are more than likely true.  Trump is willing to swindle the most vulnerable people in our country — unemployed, poor, uneducated and emotionally unstable — with a hollow promise of ‘return to greatness’ just for the sake of an elaborate brand building scheme.  It is shameful.  What is even more shameful is that so many people in this country have been willing to support him just for the sake of gaining power.

“Three paragraphs and not one word about the environment or energy!  So sad that this election has put the most critical problems before us on the back burner while we debate the history of weight gain and loss by a Miss Universe contest winner from two decades ago.  Most likely those who want to see change in the stewardship of the environment will need to take the more costly and time consuming approach of working with each state government.”

For many of my colleagues, and doubtless many readers, this election seems to be about choosing the lesser of two evils.  That said, it’s pretty clear which candidate is playing the role of Satan, and which is just the black sheep in-law.

For myself, the decision is even easier than that.  I believe that Hillary Clinton has the skills and motivation to be a good or even great president.  She may not be totally honest or have perfect judgement as Debra Fiakas says, but she does know our imperfect political system from many angles and has shown herself willing to reach across the aisle for the greater good.  In my opinion, her goals for the country are (in stark contrast to her opponent) mostly the right ones, and I hope her long political experience will help her be much more effective at accomplishing those goals in spite of a highly dysfunctional Congress.

DISCLOSURE: It’s also worth noting that our holdings of clean energy stocks will perform better under a Clinton presidency than under Trump.  I would not be surprised if a Trump presidency sent the whole stock market downwards, and not just clean energy stocks. Coal companies might benefit, if that’s your sort of thing.

This article was originally published by AltEnergyStocks.com and was republished with permission.