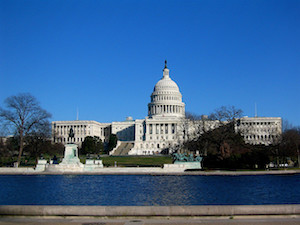 Regarding the question as to climate change, I think the President was straightforward. We’re not spending money on that anymore. We consider that to be a waste of your money to go out and do that. —Mick Mulvaney, OMB Director

No politician—not even The Donald—can expect to stay in power without being able to point to some accomplishments. Dystopian visions will only get you so far. Surrogates can only rationalize for so long.

Seeing pictures of The Donald walking around the White House grounds the other day, I found myself wondering if he might not be having second thoughts about being the 45th President of the United States. It was a sunny spring day here in Capital City and, for whatever reason, he just didn’t look very happy.

I don’t know that I blame him. Less than a hundred days into his first term and his problems seem to be growing at a much faster clip than his accomplishments. Tryancare’s failure to make it on to the House floor after weeks of negotiation couldn’t have pleased him.

Add to this: the world’s waiting to hear what his next moves will be in Syria and North Korea; the intrigues surrounding Russia’s possible involvement in the 2016 elections; the involvement of Trump advisors and nominees with Russia; the looming need to fund the federal government for the remainder of the fiscal year; the circling of hostile Democrats; and cellar popularity numbers.

When totaled, these factors paint a pretty dismal picture. Clearly The Donald needs a victory if doubts of his deal-making abilities aren’t to grow.

Put yourself in Kellyanne’s Jimmy Choo’s, Bannon’s New Balance sneakers—should he still be around—or Ivanka’s silver slippers. What would you recommend?

If your answer didn’t include phrases like smoke screen or finding and focusing on something most of Trump’s supporters, alt-righters, conservative think tanks and blue dog-Democrats might all be convinced to rally ’round, don’t dream of standing at the right hand of The Donald any time soon.

The one promise Washington policy makers—rookies and veterans alike—can make with conviction and confidence is effective obstructionism. Although in this case, the more appropriate word is probably undoing—as in any and all of Obama’s executive orders remotely related to the problem of climate change. A problem Trumpsters contend is fake science wrapped in the guise of phony predictions of Earth’s early demise.

One of the most galvanizing phrases in the Republican lexicon is: we don’t need no lousy environmental regulations. For a president in need of proving to his supporters he still has it, dismantling federal clean energy and environment programs is a sure winner.

When Negatives Are Positive

Environmental deregulation by executive orders is pretty much the perfect solution from the White House’s perspective.

Discounting the eight or so years of legal arguments it took before EPA was told by SCOTUS it actually had the authority to make the endangerment finding, it took the Agency 14 months just to go through the rule-writing process. After its release in 2009, the finding was subjected to several years of litigation, some of which was captained by the current EPA administrator Scott Pruitt. (see below)

Even the recent plethora of promised law suits play into the hands of deniers. For those dismissive of the accepted science of global warming, a delay is nearly as good as deregulation or the actual dismantling of the multitude of federal programs and policies.

Environmental deregulation offers a platform from which clean energy regulations may be struck from the books. Consider the recent ordering of EPA to reopen its mid-term review of Corporate Average Fuel Economy  (CAFÉ) standards.

Right out of the gate The Donald earns points with his base, including a significant number of industries, e.g. fossil and automotive, and the House Freedom Caucus (HFC). In the case of the Caucus, it offers the opportunity to maintain cordial relations even after their scuttling of Tryancare. It is in both their interests to continue the search for common opportunities.

Neither NRDC, the Commonwealth of Massachusetts, Earthjustice nor anyone else will have an easy time suing EPA, the State Department or other federal agencies, over the next year or more, for what they may be thinking. Thoughts are rarely actionable offenses.

Even before presidential orders are executed, the administration can earn political points for putting antagonists on notice of what may be coming. Pruitt’s evasiveness when asked if California will still be allowed to set tougher mileage standards than the federal government stirs the political pot.

Standard operating procedure for Trump and his administration is invocation of the five-year old’s refrain of for me to know and you to find out. As I’ve stated, emotions should not to be dismissed but considered for what they may say about the next time.

An odd addition to the list of reasons why attacks on clean energy and environmental programs and policies has cropped up. Within the last few days, Pruitt’s reasons for counselling against outright recession of the endangerment finding are being impugned by the Right.  According to reliable sources:

EPA Administrator Scott Pruitt is coming under fire from conservatives amid a simmering behind-the-scenes fight over how far to take President…Trump’s push to undo his predecessor’s climate agenda.

It appears Pruitt prevailed upon the President to refrain from ordering the Agency to reverse the 2009 endangerment finding—fearing it would immediately trigger a series of federal law suits. Suits not unlike those filed by West Virginia, Oklahoma and others in the wake of the Clean Power Plan. As I’ve written before, these challenges would be the mirror opposites of those made to the CPP.

Rather than claiming the EPA is overreaching its authority, plaintiffs in these cases would be charging that the Agency is [under-reaching] its authorities given it by the Clean Air Act, thereby, shirking its responsibility of protecting citizens from legitimate threats to their health, welfare and safety.

Pruitt may also have had another reason for asking Trump to spare the endangerment finding. His leadership of the pack in the unsuccessful case Coalition for Responsible Regulation v EPA challenging the original declaration now puts him in a very awkward position as the EPA Administrator; his involvement taints any possible claim of neutrality.

Should the Agency rescind or even attempt to change substantially the earlier declaration while Pruitt occupies the corner office opens the Agency, the Administrator and the President to charges of rigging the system.

The original finding was based upon a preponderance of mainstream scientific evidence. Any change of the finding—based on the research of deniers—would be immediately suspect and quite possibly struck down as a preconceived conclusion.

Myron Ebell, Trump’s EPA transition team leader and the Director of Global Warming and International Environmental Policy at the Competitive Enterprise Institute (CEI), is a leading critic of Pruitt’s position on endangerment. There is more than a bit of truth in Ebell’s claim that anything other than outright rescission requires coming up with a Trump Clean Power Plan.

The reason Ebell’s right is the courts are unlikely to give much credence to denier science. Simply in terms of the preponderance of mainstream scientific findings and opinion, climate change and its consequences are real. Any evidence to the contrary is going to be labelled as an outlier.

Whether they will ever give voice to it, deniers are at a significant disadvantage in courts of law, because of well-established precedents. As a result, they much prefer to plead their case in public or in Congress.

Ebell is not alone in his resentment of Pruitt’s position. James Delingpole, one of Breitbart’s bright boys, ranted the other day that the new Administrator is more interested in building his political career than he is taking on the Green Blob.

There is an odd angle to Ebell and the Alt-Right’s assault on Pruitt. It gives The Donald an opportunity to claim he is an environmentalist after all. Were he not, the story will go, he would have ordered an outright reversal of the endangerment finding.

Think about it. For the price of stationary, a few faux leather folders and 20 bucks worth of engraved Bics, Mr. Trump would accomplish pretty much of what he promised on the campaign trail, without ever having to leave the Oval Office or hearing how he failed to close the deal.

That’s some powerful incentive to persist in the victimization of federal clean energy and environment programs and policies!

A Couple of Final Thoughts

My reason for presenting the victor/victim discussion is the importance I place on clean energy and environment advocates and defenders having as good an understanding of what might be going on as possible. Consider this as a “can’t know the players without a program” thing.

Washington tends to engage in torturous reasoning that can be very confusing to anyone not tainted by political experiences. The more advocates know, the more likely they are to be able to present their points in a way the members of Congress and their staff can relate to.

Which brings me to the point of being careful of what you ask for. In the article, it was discussed a bit in relation to Pruitt’s reasons for asking the President not to include a directed reversal of the endangerment finding.

My admonishment is this: don’t let decision makers get off cheaply in response to your requests. Is the administration’s willingness to remain a signatory on the Paris Accords a meaningful response in relation to its attacks on federal climate and clean energy policies and programs?

Before answering, consider that several major coal companies are asking Trump to stay on the Accords—particularly if the administration is willing to fund clean coal research. Other coal companies disagree.

No matter. My opinion on this:

OPPOSE THE U.S. REMAINING AT THE TABLE IF THE ADMINISTRATION CONTINUES ITS EFFORTS TO RAPE FEDERAL CLEAN ENERGY AND ENVIRONMENTAL DEFENSE PROGRAMS AND POLICIES

lest the adjective HIPPOCRITE be added to the list of things other nations may say about us.

That’s my opinion, yours may be different. All I am asking is for you to think about it.

The Trump Administration’s position or lack of position on Paris is already causing difficulties for other nations. At a recent meeting of the Group of Seven meeting, energy officials were prevented from releasing a statement affirming current climate priorities because the seventh member of the group—Rick Perry—informed them the U.S. was in the process of reviewing its position.

It appears the administration finds value in obstructing other nations from acting in defense of the global climate, as well.

Finally, don’t let D.C. shenanigans make you forget that whatever The Donald and his doyen of deniers might say or do, clean energy and environmental protection is here to stay.

Read part one of this article here.