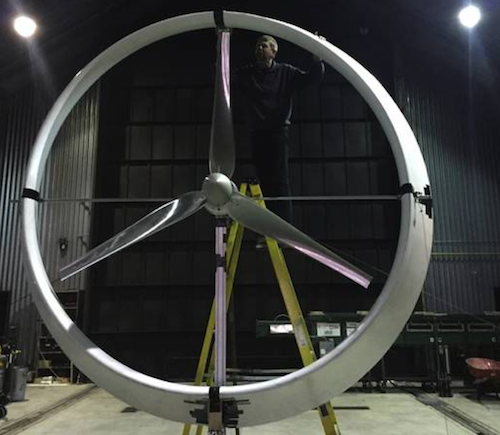 Despite its previous association with a questionable wind turbine and its promoter, Clarkson University announced that the school in upstate New York has transferred ducted wind turbine technology developed on campus to a private company for commercialization.

Visser, an associate professor in the Department of Mechanical and Aeronautical Engineering at the small school in Potsdam, N.Y., was controversially linked with Gerald Brock and his Windtamer venture. Visser, and by association Clarkson University, provided institutional legitimacy to Brock and his ducted wind turbine.

Brock, like many other promoters of ducted or Diffuser-Augmented Wind Turbines (DAWTs) before and since, made outlandish claims for his design. Brock used field tests conducted by Visser to justify his claims to have beaten the Betz limit.

Despite later attempts to distance himself from Brock and the claims made for the Windtamer design, Visser was associated with the product and the hype around ducted turbines in general. See Windtamer Hype Needs Trimmed: Betz Beaten Yet Again Raises Questions and Windtamer Ducted Wind Turbine Finally and Officially Kaput.

Brock peddled ducted wind turbines under various names up to the present.

Ducted wind turbine developers typically claim that the funnel-shaped shroud will concentrate the wind’s flow, allowing the wind turbine to produce far more energy for less cost than conventional wind turbines. In spite of decades of research and tens of millions of dollars in development, no ducted with turbine has ever lived up to the hype. The turbines either have not delivered better performance than conventional wind turbines or they were not significantly cheaper to build. Invariably the companies and their promoters fade away after the development money has been spent.

Visser says this time will be different. Based on his wind tunnel tests he claims he can improve the performance of ducted turbines over those that have gone before. His goal is to cut the cost of wind energy in half.

To justify his claims that this time is different, Visser says his wind tunnel tests show that his 2.5-meter rotor outperforms a Bergey XL1, a 2.5-meter diameter conventional wind turbine that has been on the market for many years.

The duct is 3.3 meter in diameter. The duct on Visser’s shroud intercepts nearly twice (1.74) as much of the wind stream as the 2.5-meter diameter rotor on the Begey XL1. Visser’s ducted turbine should capture 74 percent more energy as the Bergey XL1, all else being equal.

Visser estimates that his 1.2-kW ducted turbine will generate twice as many kilowatt-hours annually as the Bergey wind turbine for the same wind conditions.

Chapter 7 of Wind Energy for the Rest of Us, my new book on wind energy, takes a close look at ducted turbines and finds them wanting—time and time again. Windtamer is only mentioned in passing as simply another example of a failed ducted turbine hustle. It hardly rated inclusion in the 560-page book. The chapter, instead, examines FloDesign in particular and its commercial offshoot, Ogin. FloDesign-Ogin exhibited all the classic traits of ducted turbines and their promoters. Visser, Clarkson, and NEXUS-NY will unlikely never match the amount of money and engineering talent invested in Ogin by the likes of venture capitalists Kleiner Perkins. One pension fund alone “invested” $60 million in the project.

If Visser can’t build and operate his turbine for less than the cost per square meter of a conventional wind turbine, there’s no net gain. Thus, the NEXUS-NY research grant will have been squandered and the finger pointing will begin. NEXUS-NY is a program of High Tech Rochester (HTR) and is supported by the New York State Energy Research and Development Authority (NYSERDA). Who approved this grant? What were they thinking? Did they do their due diligence? Importantly, can they document that they reviewed widespread reports on the failures of previous ducted wind turbines and can they justify why this time the results would be different?

The duct is 3.3 meters in diameter not 3.5 meter. The duct on Visser’s shroud intercepts 1.74 not twice as much of the wind stream as the 2.5-meter diameter rotor on the Begey XL1. Visser’s ducted turbine should capture 74 percent more rather than twice as much as the Bergey XL1, all else being equal.

A sentence explaining that Visser estimates that his 1.2-kW ducted turbine will generate twice as many kilowatt-hours annually as the Bergey wind turbine for the same wind conditions has been added.

This article was originally published by Wind-works.org and was republished with permission.