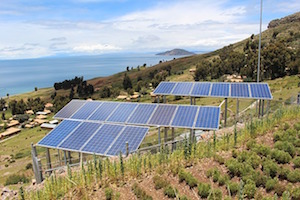 Beijing decided to keep the prevailing subsidy of RMB42 cents (US$0.06) per kWh for non-utility-scale generation. The decision echoed the ongoing work and policies of the State Council and the Energy Bureau to promote generation at the point of consumption. This, together with the electricity reform, sets the stage for the proliferation of distributed energy resources (DER) in the world’s largest solar and wind power producing country.

China’s Ministry of Finance has been claiming a deepening financial gap in subsidizing renewable energy, which arguably stood at RMB$50 billion (US$7.3 billion) last year. Hence, maintaining the same level of feed-in tariffs for DER, but opting to reduce those for utility-scale installations, sends a strong signal to the market — the Central Government recognizes the unique role of DER in achieving the environmental aspirations under the Thirteenth Five-year Plan due in 2020.

Indeed, the best solar and wind resources in China are found in the sparsely populated inland regions, such as Tibet, Xinjiang and Inner Mongolia. Developing DER — solar specifically — in coastal commercial and industrial hubs, thus, becomes the most economical choice given the challenges in transmission, the need to meet intraday peak loads, the debates in urban land use, etc. Moreover, DER is expected to face less political headwind compared to larger installations as China strives to combat overcapacity in all fronts.

Apart from its practical benefits, DER development has a different cost structure, which might explain the policy preference. Even in such developed market as the U.S., soft cost for DER could constitute over 60 percent of the total system price. If rapidly-decreasing PV module cost is attributed to the curtailment in feed-in tariff, which is the case for the NDRC decision, it might make sense to maintain the same subsidy on DER, simply because the cost of developing DER has not yet declined considerably.

Nevertheless, the analysis should also take into account the absolute subsidy level. While the central government pays RMB42 cents per kWh, provincial and local governments have been “encouraged” by Beijing to top up with additional subsidy.

Top-down political pressure to achieve the national climate goals often result in ample subsidies at subnational levels, which could drive the total available feed-in tariffs up to the range of RMB70-80 cents — similar to that in Germany while more generous than UK. Although the comparison does not consider the wide range of other incentives; it speaks loud enough considering that Chinese pay a fraction of what Germans or the British pay to turn their lights on.

Feed-in tariffs incentivize DER development but could only move the needle in a well-functioning market — China does not have one, yet. The business model of DER developers, which originate deals often by providing third-party financing, does not exist in the country. A Chinese SolarCity would play a crucial role in educating consumers why and how they should install solar panels on their rooftops. Vast opportunities exist for private capital to play a larger role here; while incumbent PV module giants, such as Yingli and JA Solar, are slow in gaining traction.

Resistance might also come from utility companies, which are charged with reconciling actual production and administering the disbursement of feed-in tariffs. Not to mention their reluctance in providing interconnection due to the utility death spiral cliché, the operational procedures, if any, could kill deals. China’s electricity market is almost entirely state-owned. Hence, regional governments could easily regulate electricity price at certain all-in levels by allocating revenues to the respective generation and transmission companies. The result of the rigid, opaque price regulation mechanism is that, utility companies have no incentive to work with DER generators.

NDRC’s electricity reform proposal released this month on launching utility rate making in China will likely address the reluctance. The country is finally welcoming the long-tested regulatory approach which stipulates approved rate of return for utilities based on their capital expenditure. Spending on DER adaptation infrastructure will likely be approved and encouraged thanks to the top-level blessing on DER. At the same time, regulators and generators have commenced feasibility studies and launched test cases for direct purchase of power from large electricity consumers. This also incentivizes DER installations.

Perhaps the largest stimulus is the increased private investment into the power sector during the electricity reform. Liberalization of China’s upstream generation market would incite private sector’s interest. With a supportive policy framework and thriving demand for renewable energy as urban coal plants are shut down, private capital will find its way to sponsor opportunities in DER, which could be deemed as a natural hedge against their investments in conventional power. This is how ESCOs in developed markets initially took their shape.

The imperative to enhance its energy mix will only be reinforced by more supportive policies in China. Beijing cannot fail its climate goal, not only because of its ego to become a global climate leader but also due to the intensifying discontent from its fellow citizen — a time bomb threatening social stability. A face mask might restrict particulates under the worst smog, but it never stops citizens from complaining through their keyboards.