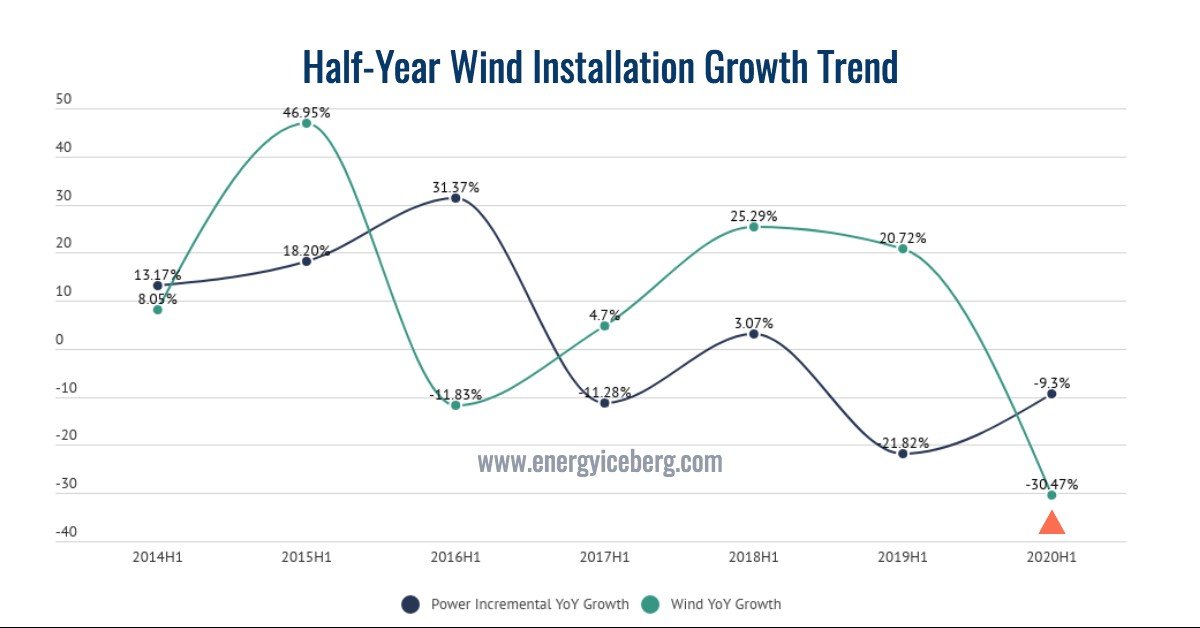 The first half of 2020 was an eventful time, needless to say.

China’s wind and solar power mix have witnessed steep installation drop and skyrocketed investment figures in the first half this year, amid ongoing challenges of the coronavirus outbreak and mounting tension between China and the US.

The statistics of the country’s renewable power market send out mixed signals, investors and market stakeholders should take note.

It is clear that the ongoing Coronavirus pandemic has taken its toll on China’s renewable power market—perhaps even worse than previously expected.

The drop in electricity capacity growth is not a surprised at all, due to the work disruption triggered by the pandemic—it is also related escalating tension between China and U.S, which adds pressure to China’s slow-down economy.

However, what is surprising is that renewable power, especially wind, was hit the hardest. Incremental wind capacity in 2020H1 was 6.32GW, which marks a 30.47% year-on-year decrease, according to CEC.

The comparison is somewhat shocking since the renewable market is in the middle of a project dash wave. To secure a national subsidy that soon to sunset, developers only have several months to connect their turbines and panels.

So what are the reasons for the steepest installation drops?

In our view, the data points to the higher vulnerability of renewable’s construction activities amidst the challenges brought by Covid-19. These challenges include supply chain and transportation bottleneck, which seems to strike wind and solar projects harder–compared to the more “centralized” conventional power projects.

While the pandemic is increasingly likely to become the “new normal” in our life in the coming months or even years, the installation data could be an alarming signal to the ambitious renewable investors.

Bottleneck due to construction capacity

The data, in our view, is a especially chilling signal for the offshore wind market.

For offshore developers, there is still some time left for locking in the feed-in tariff. But again, reality shows serious hurdles facing China’s offshore construction agenda.

Of of the 6.32GW wind newly connected to the grid, offshore wind developers contributed almost 17% or 1.06GW.

Offshore wind is taking a more substantial role in China’s wind market. The new installation is more than two-fold of that in 2019H1, which was only 400MW.

Still, the installed figure is far shy from ambition—more than 40GW was approved in 2019 and eying on securing the subsidy.

Indeed no analysts expected the 40GW could succeed in securing grid connection by the end of 2021—the cut-off day for the subsidy. But most predictions still over-estimated the result–in part due to the unexpected outbreak.

Some recent predictions have adjusted their previous figure. Tianfeng Securities, for instance, believed that 4-5 GW and 6-7GW are feasible in 2020 and 2021. But such forecast may still subject to further adjustment.

Based on the data, we are expecting the following:

The challenging reality did not seem to cool down the enthusiasm of developers committing to new project investment.

Wind took up almost 50% of the total power project investment in China in 2020H1. The figure for wind’s share is the highest at all time.

The aggressive capital expenditure in offshore projects is a major driver of the overall soaring wind and power investment figures. It is also a critical factor contributing to a $35bn global finance for wind in the first half of this year, according to BNEF’s June data.

But what would happen to these investments, as most projects would be unlike to lock in the national subsidy?

Simply put, many investments and projects would struggle with poor financial returns.

This article was originally posted by Energy Iceberg and was republished with permission.