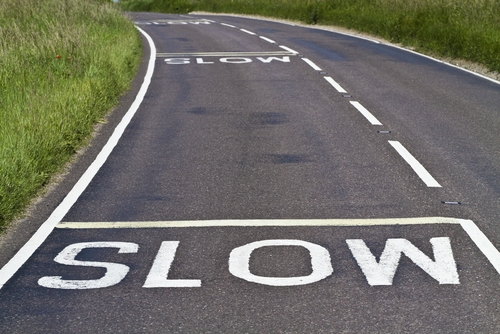 BEIJING — China, the world’s biggest builder of wind farms, is set for its first year of slower growth in almost a decade as plans flounder for expanding offshore, hurting domestic turbine makers such as Sinovel Wind Group Co.

Developers will install 18.6 gigawatts of windmills, 7 percent less than last year, according to Bloomberg New Energy Finance. The state is curbing construction on land so that power-delivery grids can catch up with the explosive growth of wind energy in recent years.

At the same time, the government has failed to start sea- based plants on schedule as officials disagree over sites. That jeopardizes China’s goal to rival Europe by 2020 as the largest installer offshore, a faster-growing global market dominated by European turbine makers such as Siemens AG and targeted by China’s Sinovel and Xinjiang Goldwind Science & Technology Co.

“I see these goals as very unrealistic,” said Caitlin Pollock, a San Francisco-based analyst at IHS Emerging Energy Research. China’s setback in ocean-based wind farms may restrict sales for Sinovel, Goldwind and Chinese competitors “striving to enter as many new markets as possible.”

Sinovel and Goldwind, the nation’s biggest wind–turbine makers, are chasing ocean-based projects as a way to gain credibility to eventually compete with the main European suppliers in a global offshore market that IHS Emerging Energy Research says is set to grow nine-fold through 2025 to almost $52 billion a year.

More than 90 percent of wind farms being built off European shores are using turbines from suppliers such as Siemens, Areva SA of France and Denmark’s Vestas Wind Systems A/S, data compiled by Bloomberg show.

“Developers may not buy Chinese offshore turbines because they have little track record of operation and maintenance,” said Demi Zhu, a Beijing-based analyst at BNEF. “It’s currently impossible to find offshore wind turbines that provide high reliability and low maintenance costs in China.”

Disputes among competing government authorities over site locations have blocked progress on China’s goal to build 30 gigawatts of offshore capacity by 2020. On land, the government has tightened approvals for new projects after the nation lost 10 billion kilowatt-hours of wind power last year due to an overwhelmed transmission grid. Even so the new capacity, equal to 17 atomic reactors, will still rank China No. 1 in new wind parks in 2012.

Vestas and Suzlon Energy Ltd. of India, two of the six largest suppliers worldwide, said in the past week they’re scaling back manufacturing operations in the world’s biggest turbine market.

“The China wind market has peaked,” the London-based researcher said in a note to clients on June 11. Goldwind and Sinovel may seek to shift idled older capacity to the development of larger offshore turbines, it said.

In contrast, Europe’s offshore market is projected to grow by 86 percent from 2011 to 2015 led by installations in the U.K. and Germany. Overall, global onshore installations were forecast to increase 20 percent in that same time period.

European governments don’t have official offshore targets. Estimates from the European Wind Energy Association and BNEF expect the continent to have installed about 35 gigawatts to 40 gigawatts by 2020.

China’s 2020 target is now looking unlikely. Work has yet to begin on four commercial projects awarded in its first auction in 2010 of offshore contracts.

That’s choking the ambitions of Sinovel and Goldwind, which sell more than 95 percent of their turbines to the shrinking, oversupplied onshore market at home, to expand into a new segment dominated by Western rivals.

Their shares have dropped 49 percent and 65 percent, respectively, in the last 12 months compared with a 27 percent loss in the Bloomberg Wind Energy Index comprised of 64 companies.

The stock of Sinovel closed at 7.5 yuan in Shanghai trading today and Goldwind ended at HK$2.87 in Hong Kong, both little changed on the day.

“Goldwind has been actively paying close attention to offshore wind–power development with careful implementation,” Ma Jinru, a Goldwind spokeswoman, said by e-mail today. The company is researching and developing 6-megawatt offshore turbines and planning 10-megawatt machines, Ma said. An e-mail and a call to Tao Gang, a spokesman for Sinovel, weren’t answered.

Yu Jianjun, vice president of Sinovel, said at a conference in May in Shanghai that offshore will comprise about 20 percent of sales in 10 years.

While many manufacturers try to penetrate the market, few are likely to win significant sales because of stringent quality requirements set by project developers and their banks, Zhu said. London-based BNEF revised down its growth projections for China’s offshore wind market by 11 percent in January, saying the lack of experience and limited access to capital is decelerating growth from the government’s targets.

Only eight “serious manufacturers” will exist by the latter half of the decade, according to BNEF. Siemens, the biggest supplier of offshore turbines, says the field may narrow to as few as five.

When China tendered 1 gigawatt of offshore capacity in May 2010, it expected the sea-based projects to alleviate power shortages in the country’s major industrial corridor by building the parks adjacent to the coast to circumvent a congested grid.

Eager for an early foothold, the companies bid at prices that now appear too low, said Zhang Fangyu, general manager of Datang’s Zhejiang Branch. The average winning bid was 0.68 yuan a kilowatt-hour, half what Germany pays to offshore wind farms for the first eight years.

“The bids aren’t demonstrable,” Zhang said. “We won’t bid at such a low price for other projects in the future.” The government should raise the tariff to 0.8 yuan to make the projects profitable, she said.

Longyuan and Datang say they still plan to complete the projects even if they don’t turn a profit.

That’s what scares investors, said Michael Parker, a Hong Kong-based analyst at Sanford C. Bernstein & Co. Longyuan and Datang are “un-investable” and liable to “spend on new projects at great haste without regard for returns,” he said.

“The single greatest investor fear about this sector has been partially confirmed: They will build until they run out of cash and then simply issue more equity,” Parker said on May 22 after Longyuan announced plans to sell 1.36 billion new shares in Hong Kong, 20 percent of proceeds from which will be spent on offshore wind projects. The stock has fallen 15 percent since announcing that plan on May 11.

China needs 480 billion yuan ($75 billion) to meet its goal of becoming the world’s biggest offshore wind market by installing 30 gigawatts of capacity by 2020. Raising the funds necessary to meet that goal could be challenging, said Jerry Weng, an analyst at KGI Securities.

“Few are venturing to enter the market now,” Weng said.