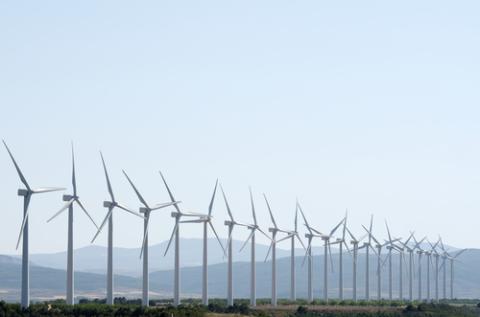 BEIJING — Consolidation may cut the number of wind turbine makers in China, the world’s largest wind market, by two thirds in the next five years as oversupply pressures grow, according to an industry association.

The shakeup, which could leave China with as few as 10 turbine makers, means those with more advanced technology stand the greatest chance of surviving, Shen Dechang, vice secretary- general of the Chinese Wind Energy Equipment Association, said in an interview. Xinjiang Goldwind Science & Technology Co. will grow steadily while Sinovel Wind Group Co. and Dongfang Electric Corp. will fall behind, Shen predicts.

“Given that China only adds as much as 20 gigawatts of wind power annually, capable companies which stand out after years of competition will attract more orders,” forcing out the weaker ones, Shen said.

A contraction would represent a challenge to efforts by Denmark’s Vestas Wind System A/S to boost market share. Foreign turbine makers may see their portion of the market fall to as little as 1 percent from about 5 percent now, Shen said.

An equipment glut has driven turbine prices down 23 percent from 2009 levels and trimmed margins, according to Shen’s organization, which acts as a bridge between China’s government and producers of wind equipment. Supply outstripped demand by 40 percent at the end of last year, according to Bloomberg data.

“This rate may fall to 35 percent in two or three years as shutting or integrating some companies eliminates capacity,” said Zhou Yiyi, a Beijing-based analyst from Bloomberg New Energy Finance.

The 10 largest makers of wind equipment in China last year accounted for 78 percent of a market where capacity last year grew 16 gigawatts, according to data from the wind energy association.

Vestas Chief Financial Officer Marika Fredriksson told the Copenhagen-based newspaper Borsen this week that the company puts China at the top of its agenda.

Vestas, which returned to profit in the final three months of last year after nine quarters of losses, was the 11th largest supplier of wind equipment in China in 2013 and the top foreign supplier, according to the wind energy association.

Foreign competitors are less flexible and slow to customize products for China, while their emphasis on quality leads to higher prices of their products, said Zhou.

“The market will further concentrate as other producers quit,” said Lai Shensheng, a Shanghai-based analyst at Capital Securities Corp.

Beijing-based Goldwind will account for 30 percent of the market by 2017 from 23 percent now, Lai forecasts.

Policy makers in China are dealing with increasing strains in the financial system after years of debt-fueled economic growth. A provincial court accepted restructuring applications from manufacturer Shandong Changxing Group and its three main units under China’s bankruptcy law on March 28, two government officials with knowledge of the matter said on April 11. Bad loans held by the group are related to its wind power projects, according to the officials.

“Companies with less competitive technology and quality will die and their market share will be carved up by several rivals,” said Jerry Weng, a Shanghai-based analyst at KGI Securities Co.