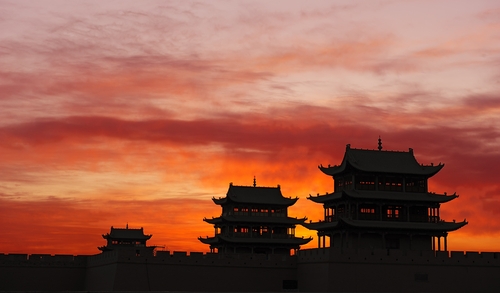 China, the world’s biggest supplier of solar power panels, plans to add 10 gigawatts of solar power capacity this year, more than double its current level, the National Energy Administration said in a statement on its website on Jan. 8. LDK Solar Co. and Trina are the biggest gainers on the China-US gauge this year, after the government approved subsidies for rooftop solar installations Jan. 4, and initiated a second round of assistance to more than 100 solar developers last month.

“China is looking over the long term to move toward cleaner energy sources and to make their economic growth less energy dependent,” Charlie Awdry, a portfolio manager for Henderson Global Investors Ltd.’s 500 million pound ($801 million) China Opportunities Fund, said by phone yesterday from London. “The Chinese economy appears to be growing a little more robustly than it was in the middle of 2012 and that has caused some investors to feel more comfortable in China and put some money in.”

The iShares FTSE China 25 Index Fund, the largest Chinese exchange-traded fund in the U.S., gained 1.1 percent to $41 in its first advance in three days. The Standard & Poor’s 500 Index climbed 0.3 percent to 1,461.02 amid investor optimism over fourth-quarter U.S. corporate earnings.

The Shanghai Composite Index of domestic shares was little changed at 2,275.34 yesterday, while the Hang Seng China Enterprises Index advanced 0.9 percent to 11,817.77, the biggest gain in a week.

China has approved a plan to provide subsidies to rooftop solar installations, China Daily reported Jan. 4, citing the Ministry of Housing and Urban-Rural Development. Subsidies will range from 7.5 yuan ($1.20) to 9 yuan per watt, according to the report. The nation will also make regional adjustments to the so-called feed-in tariffs, or above-market prices paid for electricity for renewable energy projects, according to a government statement on Dec. 19.

“It’s more healthy for China to shift subsidies toward the demand side from aids to suppliers,” Aaron Chew, a senior analyst at Maxim Group LLC, said by phone from New York yesterday. “But China’s capacity increase is still not enough to offset declines in other markets, and it may take two or three years for the market to recover and companies to make profits.”

Semiconductor Manufacturing surged 13 percent to $3.05, the highest price since September 2011. Its shares added 11 percent in Hong Kong yesterday to HK$0.49. JPMorgan raised its 12-month price target on the company’s stock to HK$0.53 from HK$0.45, maintaining an overweight rating, the equivalent of buy. Credit Suisse Group AG lifted its recommendation to outperform from neutral on Jan. 7.

The Shanghai-based company said its board is scheduled to approve fourth-quarter financial results on Feb. 6, according to a filing yesterday.

China Eastern Airlines Corp., the nation’s second-biggest carrier by market value, gained 3.7 percent to $21.5 in New York, the highest price since November 2011. Its ADRs traded 1.6 percent above shares traded in Hong Kong, the widest premium since Nov. 23. Each ADR represents 50 underlying shares in the Shanghai-based carrier.

Fifty-day volatility on the China-US gauge rose to 19.2 yesterday, the highest since Nov. 23, data compiled by Bloomberg show. Twelve-month non-deliverable forwards on the yuan strengthened 0.2 percent 6.2965 per dollar yesterday in New York, the highest level since March 9. The currency weakened less than 0.1 percent to 6.2262 in Shanghai.