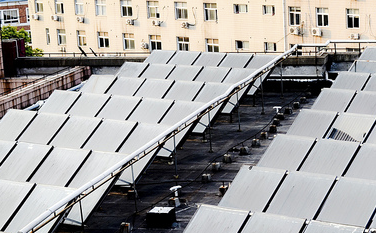 On the back of a series of policies including the “630” policy, initiated by the Chinese government at the end of 2015, setting benchmark pricing for solar PV power generation projects, China added more than 20 GW in PV generation installation capacity during the first half of this year, a year-over-year increase of 300 percent.

According to industry insiders, the country’s PV industry is being cautioned to control the pace of growth in order to avoid a new round of imbalance between supply and demand during the second half. The industry will inevitably witness a number of mergers and acquisitions as well as restructurings during the second half. An official from the Ministry of Industry and Information Technology of China revealed that the ministry will work with regulators to establish detailed standards for the evaluation of PV producers and installers.

At a recently held conference, Wang Bohua, secretary general of the China Photovoltaic Industry Association, explained that the country had added 15.1 GW in PV power generation installation capacity in 2015, increasing the overall installed capacity to 43 GW. The country produced 95,000 tons of polycrystalline silicon during the first half of this year, up 28.4 percent from a year earlier. It imported 60,000 tons of polycrystalline silicon during the same period.

According to data from the association, the country produced PV components capable of delivering 27 GW of power during the first half of this year, an increase of 37.8 percent year on year. The country’s 42 PV component manufacturers, which have reported results, recorded an average capacity utilization rate of 88.6 percent for the same period, 9 percentage points higher than a year earlier.

Data from the National Energy Administration of China (NEA) revealed a headwind facing the sector: climbing wind and solar curtailment rates due to the inability of the country’s grid to quickly absorb this rapid increase in available cleantech energy. The country witnessed a wind energy curtailment rate of up to 15 percent for 2015, hitting a new record. The rate has since continued to rise, reaching 26 percent during the first quarter of this year.

For solar, the picture is not much better. The rate in sun-rich Gansu province and the Xinjiang region, two areas that have invested particularly heavily in PV powered facilities, saw the rate in the former rise to 39 percent and 52 percent, respectivately, for the first quarter, significantly higher than the respective 31 percent and 26 percent as of the end of last year. The NEA hopes to alleviate this issue by improving the flexibility of China’s electricity grid, as well as by finding new uses for this windfall of carbon-free electricity. Yes, it is something to keep in mind as the investment in the sector continues apace.

According to Wang, as a result of the “leadership” project — a project initiated this year by the NEA — China is expected to add up to 30 GW in PV power generation installation capacity this year, maintaining the country’s leading position across the globe.

The leadership project will be further implemented by the NEA in annual increments through the establishment of advanced PV power generation demonstration facilities and new technological application demonstration projects that support the PV industry, as well as projects specifically scheduled for this year in addition to poverty alleviation and distributed projects.

Worldwide, the U.S. and India remain on track to continue high speed growth, Japan and Europe expect to maintain growth at a comparatively slower but steady pace, while emerging PV markets, including Africa, are forecast to see a gradual increase in capacity. Wang said that, on the back of the experience accumulated from having successfully initiated phase one of the leadership project, the country is expected to more deftly oversee and manage the leadership project for the remainder of this year and in future years. The project is expected to further drive the demand for high-efficiency cells.

An official from the NEA said that the leadership project facilities have been advised to further increase investment and drive growth of the local economy, with a focus on leveraging the latest in technological advances, cutting costs while deploying systematic and mechanical innovations.