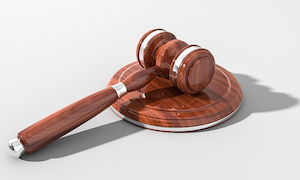 A Chinese wind turbine maker’s conviction in Wisconsin over the theft of software code is threatening to ratchet up already tense trade negotiations between the U.S. and China. It also sent the shares of U.S. software maker American Superconductor Corp. surging.

Shares of American Superconductor, the company targeted by the theft, jumped as much as 24 percent on hopes that it might be able to seek restitution for $800 million in losses blamed on the theft.

“Collection of any restitution is incredibly unclear given Sinovel’s financial status and the overall state of Chinese and U.S. trade relations,” said Jeffrey Osborne, an analyst at Cowen & Co. “This award, when and if it is collected, will be a welcome relief to investors.”

The verdict could embolden U.S. efforts to take a tougher stand against China in international trade matters, possibly leading to a thornier relationship between the superpowers.

Although the charges against Sinovel were brought by the administration of Barack Obama, trade tensions have been rising since the election of President Donald Trump last year. Earlier this week, Trump slapped solar-equipment makers, many of which are state-subsidized Chinese companies, with duties of as much as 30 percent.

“What happened in China was a crime,” said Daniel McGahn, chief executive officer of American Superconductor. “This is fuel for the Trump Administration on trade talks.”

David Bohrer, a Silicon Valley-based intellectual property attorney who’s not involved in the case, said the verdict “can’t be good for U.S.-China relations.” Wind energy development is an important industry in China, and “ultimately there will be checks on their ability to compete in this area,” he said.

AMSC partnered with Sinovel on wind power projects after China passed a clean energy law in 2005, launching the development of major wind farms throughout the country. The Chinese firm built turbines and the U.S. company developed software and technology to control them.

“The free lunch on American intellectual property is over,” said Assistant U.S. Attorney Timothy O’Shea. “The U.S. Department of Justice and the FBI are going to stand behind American innovators and American workers whose ideas are stolen.”

A Sinovel spokesman didn’t immediately respond to an email seeking comment on Wednesday. A call to the company’s headquarters outside regular business hours in Beijing wasn’t answered.

Prosecutors said Sinovel, now China’s largest wind turbine manufacturer, contracted with a former AMSC employee in Austria to steal the code in 2011, and then refused to pay the U.S. firm for $800 million in products and services it had promised to buy. The software system, called Low Voltage Ride Through, or LVRT, was designed to help regulate the flow of electricity into a power grid.

It was like a villainous plot from a James Bond movie, prosecutor Brian Levine told jurors during closing arguments earlier this week. Within two weeks of Sinovel accepting AMSC’s contract, it backed out of the deal, secret technology in hand, and the American company’s stock “takes a nose dive,” Levine told the jury.

The former AMSC employee who betrayed his company, Dejan Karabasevic, was “absolutely delighting in AMSC’s suffering,” Levine said. In an email to his girlfriend regarding the company’s plummeting stock price, Karabasevic wrote “ha ha ha.”

AMSC, based in Devens, Mass., had sought more than $1.2 billion in damages from Sinovel in Chinese courts, accusing Beijing-based Sinovel of putting the stolen source code in more than 1,000 turbines.

Sinovel alleged during the three-week trial that Karabasevic, and two Sinovel employees, Zhao Haichun and Su Liying, acted on their own without the company’s approval. All are overseas, and none has appeared in a U.S. court to face charges of participating in the scheme. Like many companies in China, Sinovel is partly state-owned.

Defense attorney Jeffrey Tsai argued in his closing that the LVRT software couldn’t have been stolen because it was well-known in the industry long before the events in 2011. The government built its case based on AMSC’s side of the story, he said, remarking that witnesses who testified on behalf of the government “have their fortunes tied to what happens in this case.”

“This really is about a business dispute,” Tsai said. “These were not kids in the 10th grade who went to the dance together and then broke up.”

The case was initially brought under the Obama administration in 2013 by a special intellectual property task force. At the time, the Justice Department described corporate espionage by Chinese agents as a threat to U.S. economic security. In August, Trump notched up pressure by encouraging the U.S. Trade Representative to investigate intellectual property theft by Chinese entities.

The Sinovel case is particularly striking as “an example of the tremendous harm that can be done to a U.S. company by virtue of the theft of its trade secrets overseas,” Bohrer said in a phone interview. “It’s a big deal for the U.S. Justice Department to make the decision to bring criminal prosecution against a Chinese company, given all the politics.”