Trouble may be brewing in China’s renewable energy industry if idled wind farms are anything to go by.

The nation’s clean-energy investment binge has made it the world leader in wind, accounting for about one in every three turbines currently installed, according to the Global Wind Energy Council. In turn, Xinjiang Goldwind Science & Technology Co., which makes the machines, has pushed past its western rivals such as Vestas Wind Systems A/S and General Electric Co.

Yet even with double the wind capacity, China still produces less electricity from turbines when compared with the U.S. That’s because it’s installing lower-quality machines using less reliable breezes and doing so more quickly than the distribution grid can take in the flows.

“The numbers are striking,” said Justin Wu, head of Asia-Pacific for London-based Bloomberg New Energy Finance. “They say China is building wind faster than it can be absorbed.” 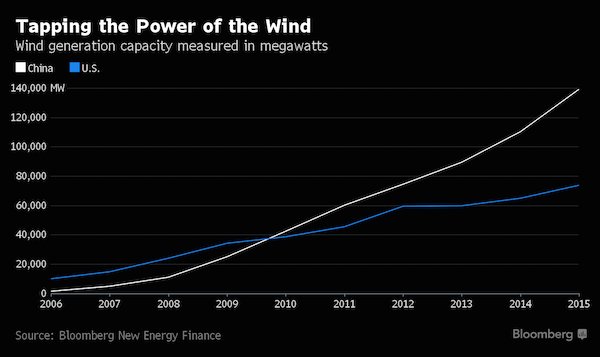 The chart above shows China’s wind turbine installations against those in the U.S., with the pace of construction accelerating since the two markets were neck-and-neck in 2009. From the end of 2006 to the end of 2015, China’s wind capacity surged 89-fold to 139.3 gigawatts, while the U.S. saw a sevenfold increase to 73.8 gigawatts, according to data from BNEF.

Yet those machines aren’t as efficient in cranking out electricity as the ones in the U.S. In 2015, the U.S. slightly edged China in wind power production, generating 185.6 terrawatt-hours compared with 185.1 terrawatt-hours, BNEF research shows. In other words, the U.S. produced more with less. 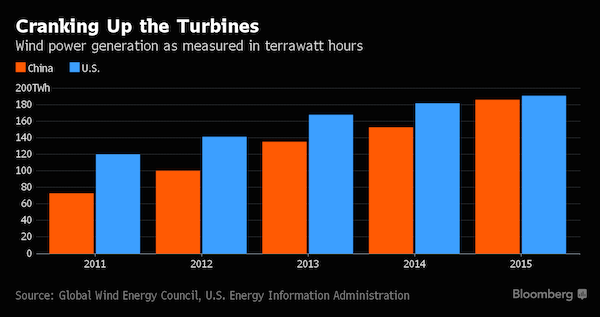 One issue under scrutiny is turbine efficiency — a concern hinted at by foreign turbine makers trying to crack the Chinese market.

Goldwind is now the world’s biggest turbine maker by shipments, while the market share in China for Vestas has declined from about 23 percent a decade ago to about 1 percent for the last two years, according to BNEF.

“We see clear signs” of a shift from a focus on low costs to energy output and internal rate of return for turbines that can operate for 20 years, Vestas’s Chief Executive Officer, Anders Runevad, said in an interview with Bloomberg Television’s Tom MacKenzie in Beijing recently.

Wind quality is also pegged as a culprit.

Findings published earlier this year in the journal Nature Energy by a group of researchers from places such as Tsinghua University in Beijing and Harvard University in the U.S. showed that the quality of wind flow explained part of the difference in electricity output between the U.S. and China.

The researchers point to a myriad of other reasons for the shortcomings of turbines in China, ranging from lower turbine quality, grid connection problems and the failure of grid operators to transmit wind power to users because they prefer other types of energy sources such as coal.

“Improvements in both technology choices and the policy environment are critical in addressing these challenges,” the authors of the report concluded.

Analysts say “curtailment” is one of the biggest challenges. Curtailment occurs when wind generation is available but grid operators won’t accept the electricity. The reasons are complex, ranging from poor grid connections to a preference for coal-fired power, which is more predictable and reliable.

China is studying how to cut idle capacity in renewables over the next five to 10 years, Nur Bekri, head of the National Energy Administration, said in interview in Beijing on Wednesday. “If China can meet a goal of transmitting and distributing renewable energy in a reasonable way, then the idle-capacity issue will gradually be solved,” Bekri said.

Despite China’s boom in clean energy, coal-fired generation still accounts for more than 70 percent of the country’s power needs, according to the International Energy Agency.