Bejing, China [RenewableEnergyWorld.com] China has instituted a new system of differentiated wind energy tariffs based on four wind energy zones. The move is the first in Asia since South Korea implemented a feed-in tariff program in 2005. China now joins a growing list of developing countries with feed-in tariffs, including South Africa and Mongolia.

Costs of the new program above the cost of coal-fired generation will be split between provincial grid operators and the central government as in current policy.

The tariffs themselves are less than those in Germany and France and less than those proposed in Ontario. Though the Chinese tariffs are thought to be based on the differences in the wind resource across the vast country, it is impossible to estimate the effectiveness of the tariffs without knowing the specific wind resources of the four wind energy zones. Nevertheless, the Chinese program may represent an innovative hybrid between the graduated wind energy tariffs in Germany and France and those single-value tariffs in Ontario, Vermont, and California.

No further details are available.

The nominal parliament of the Peoples Republic of China passed a Renewable Energy Law on February 28, 2005. The law was widely rumored at the time to include provisions for feed-in tariffs. However, as in most countries, the path to implementation is never direct and only now has specific tariffs been proposed in a program that could be called a system of feed-in tariffs.

RenewableEnergyWorld.com reported last month that China is expected to announce feed-in tariffs for solar PV sometime later this year. The industry trade magazine quoted Suntech chairman Zhengrong Shi as suggesting the tariff for large-scale solar PV plants could be equivalent to $0.22/kWh. Whether these tariffs also include access to state subsidies is unknown. 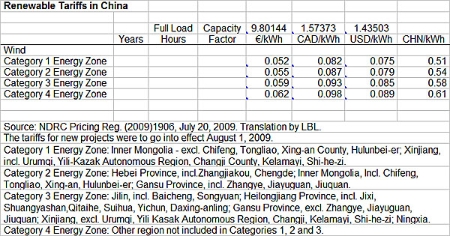