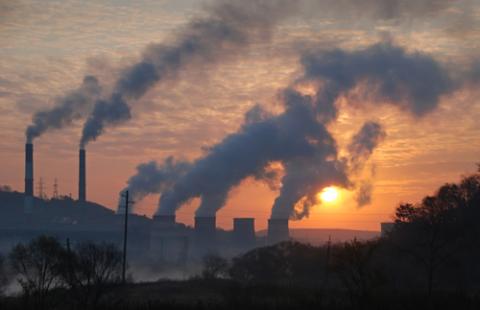 BEIJING — China doubled the pace of adding renewable energy capacity in the first 10 months of the year as the government worked to cut pollution in its largest cities.

Including nuclear power, the nation installed 36 gigawatts of clean energy capacity in the 10 months through Oct. 31, the National Energy Administration said today in a statement on its website. Windpower increased by 7.9 gigawatts, while solar rose 3.6 gigawatts and nuclear expanded 2.2 gigawatts. Hydro electric power accounted for the remainder.

The additions bolster China’s case that it’s tackling climate change by using less-polluting forms ofenergy in economy that has surpassed the U.S. as the biggest polluter. China is on course by 2035 to add more electricity generating capacity from renewables than the U.S., Europe and Japan combined, according to the International Energy Agency.

“The proportion of renewables in the total power capacity will keep rising before 2030 on government support and declining costs,” said Charlie Cao, an analyst at Bloomberg New Energy Finance in Beijing.

China has been the world’s biggest renewable energy market by cumulative installed capacity excluding nuclear power since 2011, according to data from BNEF.

The government in January set a plan to add 49 gigawatts of renewable-energy capacity this year to boost power production without increasing its reliance on fossil fuels. Newly installed capacity totaled about 33 gigawatts for all of 2012, according to data compiled by Bloomberg.

From Jan. 1 to Oct. 31, renewables accounted for more than half of all new power capacity, the NEA said. In a further sign the country is trying to wean itself off fossil fuels, electricity from coal-firedpower plants may fall to 69.6 percent of all new capacity this year, compared with 71.5 percent in 2012, the agency forecasts.

Grid-connected solar capacity on a cumulative basis could triple to 10 gigawatts by the end of the year from 2012, while wind capacity may rise by 22 percent and nuclear by 17 percent, the agency forecasts.