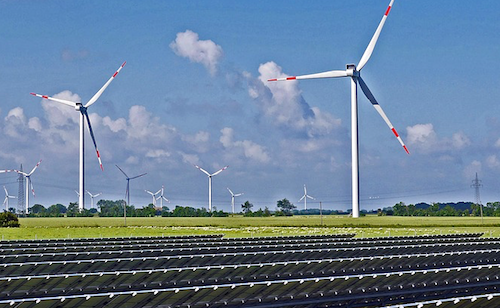 Looking at the distribution of the subsidy across the regions, 195 installations in Xinjiang Uygur Autonomous Region stand to benefit from the new surcharge, the highest number of stations in one province. The “runner ups,” in order, include 139 facilities in Jiangsu province, 130 in Gansu province and 101 in Ningxia province; and 84 in Inner Mongolia Autonomous Region, 65 in Shanxi province and 86 in Qinghai province.

The aggregate 54 GW in power delivered by the listed facilities include nearly 32 GW allocated to wind power installations, or one fourth of the wind farms in the country benefiting from the subsidies. In addition, 70 percent of the wind farms (mostly in Xinjiang and Gansu) included in the list face serious wind curtailment, meaning they stand to benefit the most from the surcharge.

Average wind curtailment in China stood at 21 percent in the first half of this year, a significant improvement over the 26 percent just for the first quarter. The results of a sensitivity analysis report show that the internal rate of return (IRR) for wind power facilities will grow by over 1 percent each time the interest rate on bank loans declines by a percentage point.

The roughly 680 ground-mounted solar PV stations approved to receive the new subsidy add up to a combined installed capacity of 19.5 GW.

At the end of December 2015, the NDRC announced the increase in the surcharge, effective Jan. 1, 2016, from 0.015 yuan per KWh, the rate at which it has been since 2013, to 0.019 yuan per KWh, a jump of 26.7 percent. The surcharge is the source of income for the renewable energy fund and is levied on industrial and commercial users. The higher surcharge is expected to help fill the subsidy gap.

By the first half of this year, the subsidy gap had reached roughly 55 billion yuan (US$8.1 billion). Despite the increase in the subsidy, the gap may increase to 60 billion yuan (US$8.9 billion) by the end of this year, as the new installed capacity of renewable energy projects may not have all come online. The gap in Xinjiang and Gansu is more than double the national average.

An increasing number of Chinese companies are building the plants that they will themselves own, and, as a result, they contribute less to the fund, resulting in a larger gap than originally projected. In 2014, China’s renewable energy subsidy receivables totaled 70 billion yuan (US$10.3 billion), much higher than the 40 billion yuan (US$5.9 billion) so far collected.

Industry analysts explained that international practice dictates the building of a market-based mechanism to facilitate the development of the renewable energy market. The increasing growth in utilization of the quota coupled with green certificate trading programs will help achieve the ultimate goal of eliminating the subsidies.