The National Wind Technology Center (NWTC) is at the nexus of a changing landscape, where the mountains meet the plains. It’s also where changes in the wind industry are being previewed. And, a visitor or passerby will notice significant yet subtle changes taking place on site, including a new turbine installation and new blades on another of the site’s giant turbines. 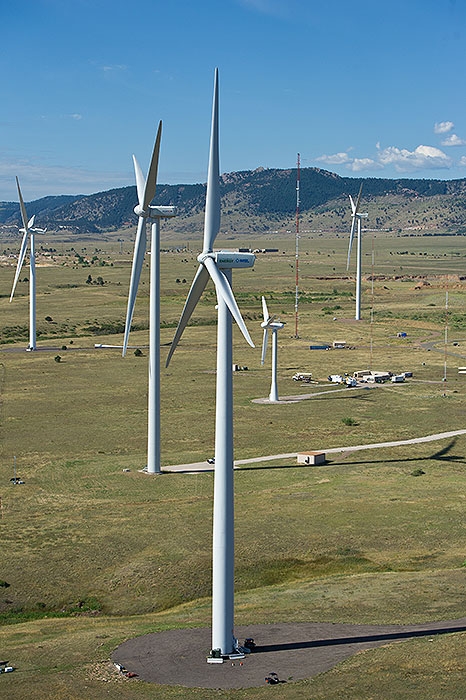 Researchers at the U.S. Department of Energy’s (DOE) National Renewable Energy Laboratory (NREL), along with their industry partners, are advancing a more sustainable energy future at the NWTC by leading the way in testing the most advanced wind turbine technologies and preparing them for future deployment.

“The addition of modern megawatt-scale wind turbines has been critical in the development of our center,” NWTC Director Fort Felker said. “It has changed the way the wind industry thinks about NREL in the sense that the work we are doing is relevant, impactful, and immediately beneficial to them. The continued partnership efforts on these turbines demonstrate how our industry partners value the contribution we provide and the important role we can play in testing new technologies.”

NREL entered into a partnership with Alstom, a French power-generation company, in early 2011 when its ECO 100 wind turbine was installed at the NWTC for certification testing.

The next step in that partnership took place recently when the turbine was updated to test a new, state-of-the-art blade design. The change converted the ECO 100 turbine into an ECO 110 turbine with a behemoth 110-meter rotor diameter, making it the largest and most powerful wind turbine currently on the NWTC site.

“This is the largest machine we’ve ever had our hands on,” NREL Test Engineer and Project Manager Jeroen van Dam said. “It’s always an exciting opportunity to get to apply our testing methods to a larger or newer concept and continue to validate those methods.”

The unique rotor design of the Alstom turbine required that the blades be switched out, one at a time, in the air. The logistics of such an operation were tricky and required two very large cranes with skilled operators and teams of staff on the ground and inside the turbine. The installation also required calm weather – hardly a given at the notoriously windy NWTC site.

The Alstom ECO 110 turbine with the larger blade configuration is specifically designed to operate efficiently at lower wind speeds. Longer blades mean more wind is captured, allowing greater power generation at lower speeds. The downside of this longer blade configuration is a greater risk of damaging structural loads on the turbine at higher wind speeds. The testing at NREL will focus on power performance and mechanical loads to validate computer modeling that predicts the design loads. This is part of the certification efforts for this turbine blade design before it can enter the U.S. market.

Time-lapse video of the blades being switched out on the Alstom turbine at the NWTC. Credit: Video courtesy of Alstom

“There is great potential for developing medium wind speed resources throughout the United States and Canada,” said Albert Fisas, director of innovation for Alstom’s North American Wind business. “With this upgrade complete, Alstom and NREL will launch a commissioning and testing program to certify the performance of the new rotor configuration for use in North America and worldwide.” 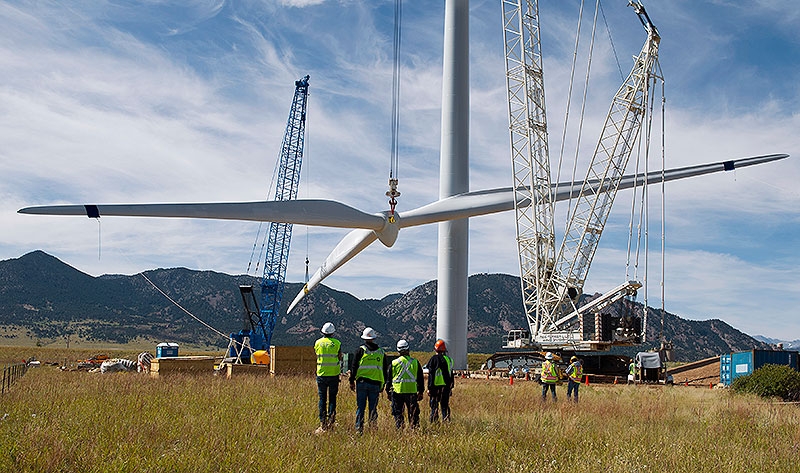 Crews lift a blade assembly onto the nacelle of Gamesa’s G9X-2.0 MW turbine at the NWTC. Credit: Dennis Schroeder

In another collaboration with the wind industry in late 2011, NREL began testing a G97 Class IIIA 2.0 megawatt (MW) turbine from Gamesa Technology Corporation, Inc. This public-private partnership was developed to study and test a variety of components and systems on the turbine and to guide development of the next generation of wind turbines being designed specifically for the U.S. market.

Testing on the original turbine was completed, and in order to continue the collaborative research, the turbine was recently upgraded with a new rotor and other components, including a new control system. This upgrade to a Class II version of the Gamesa G97 model will allow the turbine to operate efficiently at higher wind speeds.

“From the outside, you can’t really tell the difference between this one and the original — the differences are very subtle,” van Dam said. “The Class II design has different blades and more material in strategic places to make it a more robust design capable of standing up to stronger Class II wind speeds.”

“Wind energy is going to continue to play a key role in creating a stronger and more sustainable American economy,” said Dan Broderick, engineering manager for Gamesa North America. “This partnership with NREL is an exciting venture that showcases Gamesa’s commitment to enhanced clean energy development, as well as our ability to deliver reliable, efficient, and cost-effective wind turbine technologies to the U.S. marketplace.” 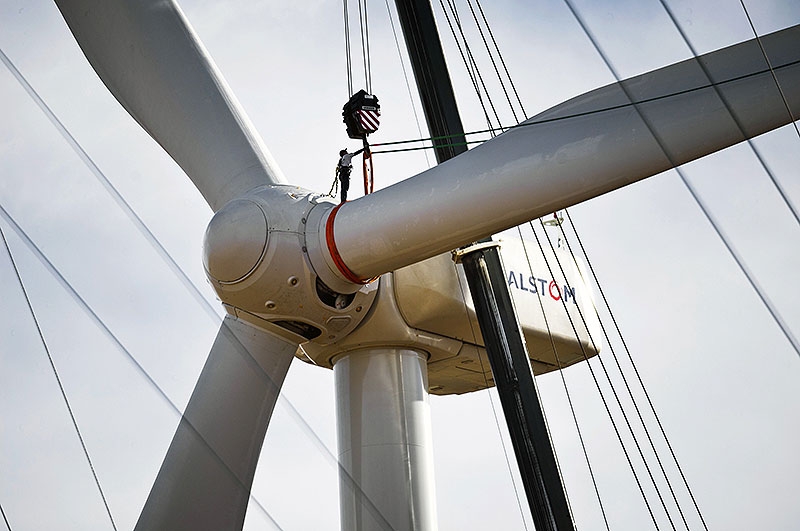 A worker helps to install the Alstom 2.7 MW turbine for extended testing at the NWTC. Credit: Dennis Schroeder

It might appear odd that these two projects — one wind turbine being refitted to accommodate lower wind speeds while another is updated to handle higher wind speeds — are happening simultaneously and at the same location. However, the NWTC site is uniquely positioned to meet the demands of both.

“Our site regularly gets Class II and Class III wind speeds, with Class I extremes,” van Dam said. “The variety of wind we get at this location allows for us to do a wide variety of testing effectively. And the fact that we often get very high winds here makes it a great location to test structural loads on all types of turbine designs, regardless of their intended wind speed for deployed use.”

Additionally, the expertise and efficiency of NREL’s testing capabilities make the NWTC an attractive location for this type of continued collaboration.

“We have unique capabilities to support the type of testing that they want to do,” van Dam said. “Also, with the site and infrastructure we have here, and the benefit of being pre-permitted on public land, the deployment of prototype technologies can be expedited. This helps get newer designs certified and to market quicker.”

NREL’s ultimate goal in this testing is to foster the technological developments necessary for wider deployment of wind energy in the marketplace at the lowest cost possible. New wind turbine designs that are able to efficiently handle a wider regime of wind speeds and the ability to select technology that is optimized for a specific location and wind resource will allow greater deployment of wind energy in more areas where it may not have otherwise been practical.

“These newer designs will have a lower cost of energy, and this can directly lead to greater market penetration,” van Dam said. “Our work in testing these new designs and having them be quickly deployed, effectively validated, and proven is a critical part of the process.”

NREL researchers are staying focused on the path forward for wind energy. Continuing to lead the way in testing new technologies and maintaining a cutting-edge approach to working with the wind industry makes the NWTC a valued partner. NREL places a high importance on its collaborations with industry and sees these partnerships as critical to meeting the nation’s goals of moving toward a clean energy future.

“We are pleased to have a dynamic and diverse group of industry colleagues working with NREL as R&D partners,” Felker said. “These types of collaborations demonstrate a commitment to crucial technology development and the public-private partnerships necessary to ensure the continued momentum of the wind power industry. Our role is to help reduce the technical risks and thereby help accelerate next-generation technology into the marketplace. NREL is proud to be at the forefront of this important work.”