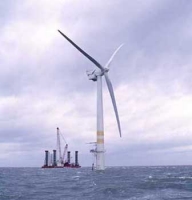 Controversy still swirls around the proposal to place 130 wind turbines off the coast of Cape Cod in Massachusetts. One formidable political obstacle, however, will soon leave the scene, with a strong supporter taking his place.

Democrat Deval Patrick, an early and strong supporter of the Cape Wind project, was easily elected governor of the Commonwealth, breaking a 16-year string of Republican control of the office. Republican Governor Mitt Romney, a Cape Wind opponent, chose not to seek reelection. His lieutenant governor and potential successor, Kerry Healey, who also campaigned against the project, lost. Along the way, Patrick this year also defeated Attorney General Tom Reilly, another Cape Wind adversary, in the Democratic gubernatorial primary. And while the election will not hasten federal review of the project, Cape Wind hopes the change in regime will serve multiple purposes. The company hopes the remaining state reviews will not be drawn out by chief executive-directed challenges and a timid bureaucracy, and that other places with pending offshore wind projects will see that the political momentum has shifted in favor of Cape Wind’s completion. Project opponent The Alliance to Protect Nantucket Sound met with Patrick earlier in the campaign. The group’s opposition wasn’t persuasive. But Charles Vinick, the Alliance president, told the Cape Cod Times he was eager to meet with Patrick again. “Clearly, we must bring before his administration the concerns we’ve raised for public safety, the concerns that fishermen have raised,” Vinick said. The Alliance has based its opposition on concerns over the environmental impact of the project, purported damage to coastal fisheries and what it says a 24-square-mile industrial project would do to tourism. The Alliance is also pinning its hopes on Senator Edward Kennedy, whose family compound in Hyannis overlooks the proposed site. As a senior Democratic leader, he is now part of the Congressional majority and could have more clout over federal review. Mark Rodgers, a spokesman for Cape Wind, downplays those prospects. “One thing that has resonated with the public in the last election are the themes of energy independence and support for renewable energy. And this received bipartisan support throughout the campaign,” he says. Longer Review Process But one change necessitated by EPAct 2005 was to transfer jurisdiction of offshore wind projects from the U.S. Army Corps of Engineers to the U.S. Interior Department’s Minerals Management Service. The MMS oversees drilling for oil and natural gas in federal waters and has had wind energy added to its responsibilities. It just concluded its public comment period over the summer. Three quarters of the public comment letters received by the MMS were positive, Cape Wind says. One thing that has resulted from the shift in the regulatory review is that the timeframe for completion keeps getting pushed back. MMS is now expected to conclude its work in early 2008. Construction would then occur in 2009 and 2010 under this revised schedule, according to Cape Wind. Massachusetts’s regulators are continuing their own parallel review of the project, but federal authorities are clearly leading the way and have primary jurisdiction. Rodgers cited how the permitting process can be interfered with, when the Massachusetts Energy Facilities Siting Board in 2005 approved the interconnection of Cape Wind’s buried electric cables to the electric transmission system in Massachusetts. The process normally takes 12 months but lasted 39 months for Cape Wind. Another impediment was when Massachusetts redrew its boundary line to include some rock outcroppings off the Cape, forcing the wind project developers to reconfigure a few turbines to keep the entire project within federal waters. One other swirling controversy is the possible affect wind turbines have on military radar. A Defense Department report indicates that commercial wind turbines have the potential to affect radar installations. The same report called a previous review of Cape Wind by the U.S. Air Force that cleared the project in relation to its potential impact on the Cape Cod Air Force Station “overly simplified and technically flawed.” Critics say the study validates its longtime concerns about the wind farm and radar. In addition, the Alliance called for further investigation. Rodgers points out that the report did not draw any conclusions about the project, but ordered further study. Meanwhile, Cape Wind recently announced several changes to the project that will increase energy production and have impacts on its visibility from the mainland. The project will boost annual production of energy by 7 percent by using the new GE 3.6 megawatt XL model. The maximum output of the turbines is unchanged, but the new model is more productive during light winds. Cape Wind says its annual expected wind power production will now be 1,594,207 megawatt hours, up from 1,489,200 megawatt hours. The new wind turbines are slightly taller than the turbines previously proposed. The wind turbine tower height will now be 258 feet, up from 246 feet. The maximum wind turbine blade tip height will now be 440 feet, up from 417 feet. The increase in wind turbine height will slightly change its visual impact from the shore. Cape Wind also is proposing a reduction in the number of red aviation lights that will be used. The number will be reduced from 260 down to 57, an elimination of 203 lights. This updated aviation lighting plan is consistent with the new wind farm lighting guidelines being used by the FAA. Previously, each wind turbine was planned to have two red aviation lights, under the new plan, only the wind turbines on the perimeter of the project footprint, and the wind turbines next to the electric service platform, will each have one light on the top of the turbine nacelle. Altogether, about 12 off-shore wind projects are under consideration in the United States. Texas has proposed a 150 megawatt project about seven miles off of Galveston Island. Texas is uncommon because the wind farm would be built entirely in state-owned waters, unlike most proposed off-shore deals that are in federal waters. Bill Opalka is Editor-in-Chief of Topic Centers at Energy Central. This article was republished courtesy of Energy Central.