Recently, I had the opportunity to tour the 370-megawatt Ivanpah Solar Electric Generating System near Ivanpah, California, in the Mojave Desert.  As I noted back in June, Ivanpah will use solar towers to produce enough electricity to power more than 140,000 homes, making it the world’s largest solar thermal power plant. Ivanpah will do this by using more than 300,000 computer-controlled mirrors that track the sun in three dimensions, reflecting sunlight onto three, 459-foot-tall towers, and creating super-heated steam to drive turbines and produce electricity.  This is amazing technology and another example of how clean energy technologies (like wind, solar, smart meters, etc.) have advanced over the past few years and become increasingly affordable. 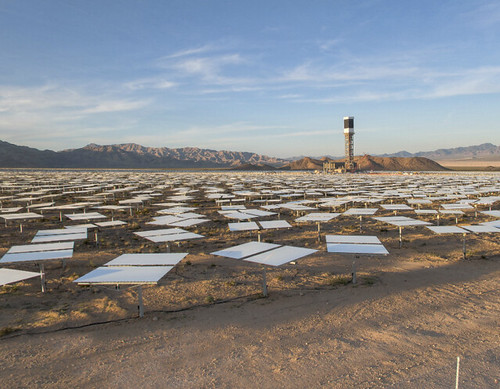 Presumably, most of us would love to take a tour of this amazing facility. But given that it’s located in the remote Mojave Desert, that’s easier said than done. That’s why it’s great to see that now we can all tour the facility from the comfort of our offices and homes. As the project’s original developer, BrightSource Energy, explains:

“For those of you curious to see the progress at Ivanpah up close but leery of the hot Mojave sun, we have great news. Now you can visit Ivanpah from your computer. A new virtual tour of the Ivanpah Solar Electric Generating System brings the world’s largest solar thermal plant to life on the web

The Ivanpah virtual tour is a collection of images stitched together to offer dramatic 360° views of this truly iconic project. Visitors can explore eight landmarks, including each of the project’s three towers, the solar field and the exteriors and interiors of Heliostat Assembly and Pad Bonding Buildings, among others. Featuring images of the project taken in April 2013, the iconic Ivanpah tour is a great, carbon-free way to see the future of renewable energy take shape.”

Having now taken the tour both in person and virtually, I can confidently report that they’re both very cool in their own way. Of course, it’s always better checking something out in person, but presuming you’re not planning a trip to the Mojave Desert anytime soon, the virtual tour’s the next best thing to being there!