California is a leader on a great many environmental issues. It is now cliche that “as goes California, so goes the nation.” This makes it even more surprising that on renewable energy, we have relinquished our lead to states like Texas and Iowa! Those two states have passed us by in terms of installed wind power. California’s wind power growth, as well as other utility-scale renewable energy growth, has been stuck in neutral for about a decade.

The trend may be changing, however. A recent report from the Public Utilities Commission (CPUC) includes a very pretty picture that made my day (Figure 1, below). This graph shows that California’s Renewable Portfolio Standard (RPS) is still alive, with significant new renewable energy capacity installed in 2008 — over four times what was installed in any previous year under the RPS and more renewable capacity than the five previous years combined. 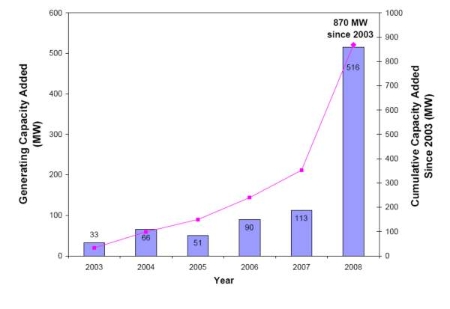 The RPS law (SB 1078) was enacted in 2002 and has had a rough start — as is clear from the short stubby bars in Figure 1. It is only in 2008 that the RPS seems to be finding its real stature. An earlier CPUC report, from July 2008, describes the renewable energy contracts in the pipeline, distinguishing each based on the risk of failure, and in the process paints a dubious future regarding meeting the RPS mandate of 20% renewables by 2010 — and an even less optimistic picture about the RPS goal of 33% by 2020. The earlier report states: “California’s IOUs may hit 20% in the 2012-2013 timeframe, if the state successfully removes barriers to project development. [This leaves] only 7 years to achieve the 60% increase in RPS generation needed to reach a 33% target in 2020.”

The latest report is more optimistic:

Clearly, 2008 was a turning point for the RPS program and contracted projects are beginning to deliver in large numbers. This may represent the end of the startup phase of the RPS program, as contracts signed in the earlier years of the program are now built and the renewable market begins to mature.

So let’s hope that California is turning around because the obvious truth is that we need to return to the rapid-growth days of the 1980s and 1990s, when almost all of California’s renewable energy and cogeneration capacity (over 10,000 megawatts (MW) still under contract) was added. The previous system, under a federal “feed-in tariff” law known as PURPA, was responsible for almost all the renewables we have online in California — except for the 900 MW now online under the RPS law and a few hundred megawatts of small-scale solar under the California Solar Initiative.

California’s PURPA system — with mandatory purchase of power offered under the “avoided cost,” which is the cost of power from a new natural gas plant — was actually suspended in 1985, just five years after it was introduced, because of “an embarrassment of riches” due to too many projects being offered to the utilities and associated fears about grid stability and ratepayer impacts. The important point to keep in mind: all PURPA projects were, by definition, cost-effective because they sell us power at below the cost of electricity from a new natural gas plant at the time the contract was entered into.

While I am very pleased to see the RPS law finally starting to have some real impacts, it is still clear that California needs other options to ensure we transform our electricity supply to clean renewable power. I’ve written in the past about the need for a robust feed-in tariff, similar to the European feed-in tariffs.

We now have a bill that would enact a European-style feed-in tariff. SB 523 (Pavley) was introduced in February and will, if passed, create a PURPA-like system of “must take” contracts for renewable energy from projects 20 MW and under. The bill is carefully crafted to not overly burden ratepayers.

Based on preliminary analysis, our small coalition (consisting primarily of the Community Environmental Council and GreenVolts, a community-scale solar power company) have found that rate impacts will probably be less than 1% per year for the next ten years, and may in fact lead to cost savings over that time frame. Longer term, it is quite clear that fossil fuel costs will keep rising and this feed-in tariff will save ratepayers money. My next column will discuss this new bill in detail.

California now has the chance to regain its leadership in this most crucial area. The RPS lives, but we now also have the chance, under SB 523, for a far more rapid build-out of “community-scale” renewable energy projects throughout California, closer to where the power is needed. Many of these project sites have already been preliminarily identified through the state’s Renewable Energy Transmission Initiative (RETI), and need little or new transmission infrastructure. These developments bode well for efforts to mitigate climate change and also for creating a robust energy system in an era of declining fossil fuel resources.

Tam Hunt is Energy Program Director and Attorney for the Community Environmental Council. He is also a Lecturer in renewable energy law and policy at the Bren School of Environmental Science & Management at UC Santa Barbara.