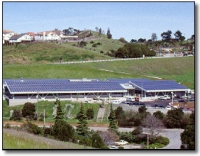 San Mateo, California – July 22, 2003 [SolarAccess.com] The US$799,890 rebate is from PG&E’s Self-Generation Incentive Program, which covers up to half the cost of on-site generation systems using renewable fuels such as solar and wind power. The county’s solar system is the largest PV system in San Mateo County, said PowerLight. “Pacific Gas and Electric Company is pleased to offer customers like San Mateo County an incentive to help them cover the cost of installing environmentally friendly on-site generation,” said Gordon R. Smith, president and chief executive officer of the utility. “The leadership and foresight demonstrated by the San Mateo County Board of Supervisors, Sheriff Don Horsley and Coroner Robert Foucrault have resulted in a facility that will provide benefits to the community for decades to come.” PowerLight designed and installed the solar system, which is capable of producing about 200 kW of power under peak conditions. Covering a surface area of 23,000 square feet, this solar system provides up to 80 percent of the facility’s peak energy load and it is already reducing the county’s electricity bill by an average of US$75,000 a year. “San Mateo County recently inaugurated this beautiful, new crime lab, and with it, we mark the beginning of a new era for the challenge of forensic science,” said Don Horsley, San Mateo County sheriff. “The new building adopts the important ideals of the use of sustainable building materials, and employs passive, energy-saving techniques. The half-acre of solar panels that make up the lab’s roof produce enough energy in the daytime to power 200 houses, and today’s rebate saved San Mateo taxpayers nearly $800,000.” Pacific Gas and Electric Company is providing the financial incentive through a program that allows customers installing on-site electric generation to obtain cash rebates to help offset the upfront costs associated with either solar, wind, fuel cell, micro turbine or internal combustion engine systems. The program, titled the Self-Generation Incentive Program, is primarily designed for business-sized systems, which help to meet some, or all, of a facility’s power needs. The California Energy Commission offers a similar program targeted to residential customers who install renewable generation sources, such as solar and wind. “San Mateo County is to be congratulated for its outstanding environmental stewardship,” said PowerLight President Dan Shugar. “This project exemplifies how local governments can improve air quality, while saving taxpayers’ dollars. San Mateo County’s responsible energy management is a model that cities and counties across the nation should replicate.”