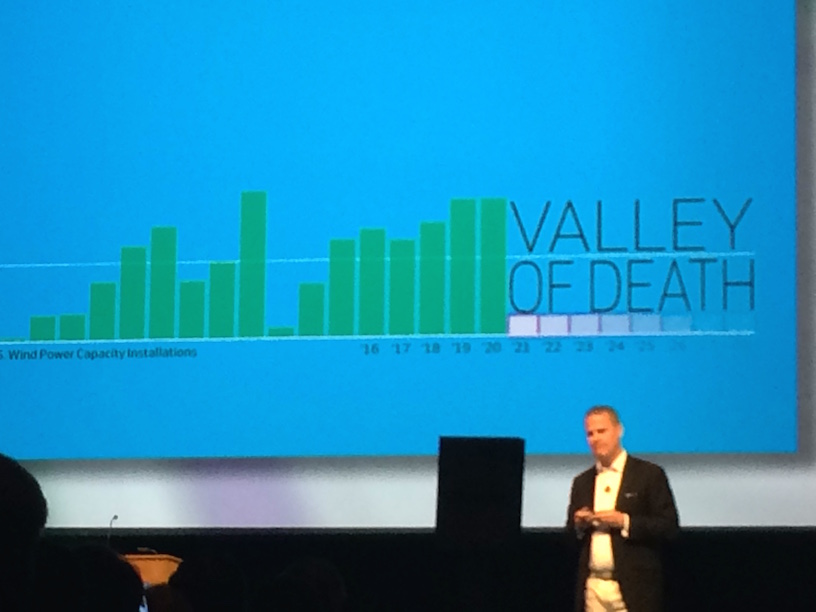 On Tuesday during WINDPOWER 2016 in New Orleans, CEO of the American Wind Energy Industry (AWEA) Tom Kiernan and President of the Vestas Americas Chris Brown said that wind power is well-positioned now but the industry has five years to get costs down enough so that unsubsidized wind power is cheaper than gas and solar.

Brown told the audience that after 2021, if costs are not low enough, wind will face a “valley of death” during which very few projects will be built.

On the other hand, Kiernan said that the industry is growing by 8 GW per year and is on track to meet the goals that AWEA laid out last year in the Windvision 2020 report. “We are moving beyond boom and bust cycles,” said Kiernan. “We now have a strong market to 2020.”

Kiernan also said that U.S. wind power is the largest source of wind power globally and that the fastest growing job in the U.S. is wind turbine technician, according to data compiled by the Bureau of Labor Statistics. He said the theme of this year’s conference is “generation wind.”

Kiernan’s five-year strategic plan to keep the industry booming after 2020 is this:

It’s that last point that he wanted to emphasize. Kiernan said that he would like “all 88,000 employees in this industry to tell their story,” because everyone has a story about what wind is doing for them and their families.

Brown positioned wind power in “the arc of human progress” and said that the world is moving from one that is “resource constrained” to one that is “technology enabled.” He believes that wind companies need to work very hard to bring down costs so that wind technology is economically viable everywhere.

“While our fuel is free, as our customers know, the machines aren’t free. The challenge is to make renewable technology so cheap that it’s the obvious choice,” he said. It’s a problem that every company needs to work on, he explained.

“When I think about the future, I want to believe that generation wind has a problem-solving mindset,” he said. “Generation wind will do a better job extending the arc of human progress. I stand here ready to build the bridge, and I believe you are ready too.”