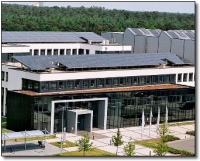 New York, New York – August 27, 2003 [SolarAccess.com] “The PV system was a part of the overall facility plan from day one” said Herbert Peels, GE Wind Energy’s General Manager for Europe. “Our objective was to further demonstrate our commitment to renewable energy.” The PV facility concept was supported by the State of Lower Saxony, and designed in cooperation with architect Stanley Black from Mýnster and Solar Engineering Decker & Mack GmbH from Hanover. According to a study by Solar Engineering Decker & Mack GmbH, the system is expected to produce annually approximately 87,000kWh of electricity. The system is operated by Windwýrts Energie GmbH from Hanover, which was established in 1994 and has completed wind energy projects with a total capacity of 65MW over the last few years. During the facility’s design phase, windows and PV modules were carefully oriented to ensure efficient electricity generation as well as sufficient daylight for optimal working conditions in the production area. During construction, PV modules were integrated at a 30-degree angle into the southern facing sides of the skylights. The skylights are fitted with semi-transparent amorphous silicon PV modules that filter light to offer protection from the increased heat during summer months. The roof installations were designed so that standard solar modules could be used. At the office complex, amorphous and crystalline silicon PV modules are installed in the form of two sails at a 15-degree angle as a feature of the building’s architecture. The PV modules take up approximately 1,500 square meters of roof space. A large digital display that provides information on the system’s key production data, as well as current performance information and accumulated energy yield rounds off the system. “This project shows that different renewable energy businesses can complement each other,” said Mr. Koeppen, BP Solar project manager.