Nashua, NH — As the U.S. progresses inch-by-inch to get a single offshore wind turbine constructed, Belgium announced that it plans to construct an island for the sole purpose of storing its vast amounts wind energy. According to reports, this is part of Belgium’s plan to wean itself off of nuclear energy by 2025, which as of 2011 accounts for more than half of its energy production. 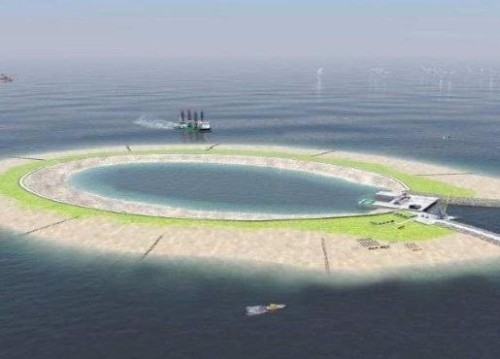 Government officials are confident that the island will solve intermittency issues that commonly occur in renewable energy production, such as wind and solar. The island will use a pumped-hydro system to store excess wind energy generated during off-peak hours, which will then be used to help satisfy the demand during hours when the wind isn’t blowing.

The three-kilometer island — shaped like a horseshoe with a vast, deep reservoir located in the center — is to be located three to four kilometers off the coast near the province of West Flanders. When the wind is strongest, typically at night, water will be pumped out of the reservoir through turbines and into the sea. When energy demand is high, the water will be let back into the reservoir through the same turbines.

“We have a lot of energy from the windmills and sometimes it just gets lost because there isn’t enough demand for the electricity,” said a spokeswoman for Belgium’s North Sea minister Johan Vande Lanotte to Reuters. Vande Lanotte revealed the plans last week during a presentation at the Belgian port of Zeebrugge.

Belgium has just over 1 GW of wind capacity as of 2011, which accounts for about 2.9 percent of its electricity consumption, according to a European Wind Energy Association (EWEA) report. Belgium hopes to eventually establish 2,300 MW of wind capacity from its North Sea wind farms alone, which can help replace one of its two 3,000-MW nuclear plants.

The project is expected to take anywhere between five to seven years to complete, and is dependent on the utility to stregthen the grid transmission system leading inland from the coast, according to Reuters. Vande Lanotte did not specify the costs of the project during his presentation, but said that he hopes to offset costs by selling excess power to other countries. He also said that countries, such as the U.K., would be able to directly connect to the undersea transmission if they choose, according to reports.