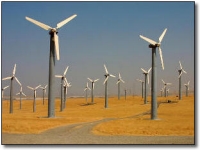 With as many as 7000 wind turbines turning at a time, Altamont pass, one of the oldest and largest wind farms in the world, also happens to be one of the most controversial. While a rare issue for modern wind farms, bird mortality at the 20 year-old Altamont pass has been a particularly visible and unfortunate subject, putting what many say is an unfair blemish on the wind power industry.

Altamont Pass, California – January 29, 2004 [SolarAccess.com] The wind farm is facing another chapter in the story with the recent filing by an environmental group of a lawsuit against two major companies involved in the project. The Center for Biological Diversity (CBD), a nonprofit environmental group, filed a lawsuit January 12 against FPL Energy and NEG Micon alleging that bird kills in the Altamont Pass violate the Bald Eagle and Golden Eagle Protection Act, the Migratory Bird Treaty Act, and several California Fish and Game Code provisions. According to the American Wind Energy Association (AWEA), the issue is coming to a head at this time because the 20-year permits for the Altamont Pass wind farms are coming up for renewal. The County of Alameda has recently approved repowering permits for the majority of the wind turbines in the Altamont Pass wind resource area. CBD and Californians for Renewable Energy filed a formal appeal of the permit renewals with Alameda County in November, 2003. The lawsuit, filed in Federal District Court in San Francisco, is brought under California’s Unfair Competition Law, which prohibits businesses from violating other laws in the course of their business activities. Due to the lawsuit, the East Alameda County Board of Zoning Adjustments on January 15 delayed a final decision on approval for 15 additional permits for two weeks. It was the second time the board has delayed issuing the permits. A working group that includes representatives of wind plant operators in the pass and a number of local, state, and federal agencies including the U.S. Fish and Wildlife Service and the California Department of Fish and Game has been discussing a variety of measures aimed at reducing raptor collisions. The group is scheduled to meet soon to select specific measures for testing over the next several months. In a letter to the Sacramento Bee before the lawsuit was filed, AWEA Deputy Executive Director Tom Gray commented on the situation: “No one is happy about the problem of raptor kills in Altamont Pass,” Gray said. “The wind energy industry has worked hard over the past decade to reduce the impact and make sure that other sites don’t have similar problems. Those efforts have largely been very successful – there are dozens of other wind sites around the country, and none has experienced a raptor mortality rate anywhere near Altamont. It remains an anomaly. Wind turbines and wildlife can and do coexist successfully. “Within Altamont Pass itself, wind companies have researched the issue almost continuously, in direct consultation with the U.S. Fish and Wildlife Service and state agencies, since it first came to attention. Those efforts continue today. “New wind projects elsewhere are carefully planned to minimize environmental impact, even though wind is already one of the cleanest, most environmentally friendly energy sources in the world due to the fact that it emits no air or water pollutants or greenhouse gases, requires no mining or drilling for fuel, and produces no toxic waste. “Individual bird deaths due to wind development will never be more than a very small fraction of those caused by other commonly-accepted human activities and structures. The choice is not wind or nothing-our society demands a large and steadily growing supply of electricity. If that electricity does not come from wind, it will come from some other source with more damaging environmental consequences. The question we must all ask ourselves is: if not wind, then what?” Mark Rodgers, the spokesman for the Cape Wind project, a proposed 420 MW wind farm off the coast of Cape Cod, Massachusetts told a local newspaper that issues at Altamont pass have unfairly tarnished the image of wind farms. Rodgers told John Leaning of the Cape Cod Times that, “It’s important to understand that the experience at Altamont Pass has not been experienced elsewhere in the U.S., where most wind farm studies have shown to have very low amounts of avian mortality.” While it appears that migratory patterns may factor into the equation at Altamont, the older lattice-style towers on some of the turbines, offering good perching areas for birds, are partly to blame according to industry sources. The wind turbine industry used these towers early on but have since moved onto sleeker towers that offer no locations for birds to perch. Steven Stengel of FPL Energy, explained to John Leaning of the Cape Cod Times that the wind power industry has matured and is more cognizant of avian issues. “I think clearly the industry has evolved over 20 years,” said Steven Stengel of FPL Energy, the country’s largest producer of wind energy. “We know more than we did 20 years ago. Clearly siting of the turbines, sensitivity to various habitats, those are all things that are taken into consideration today.” Portions of this article courtesy of AWEA’s Wind Energy Weekly