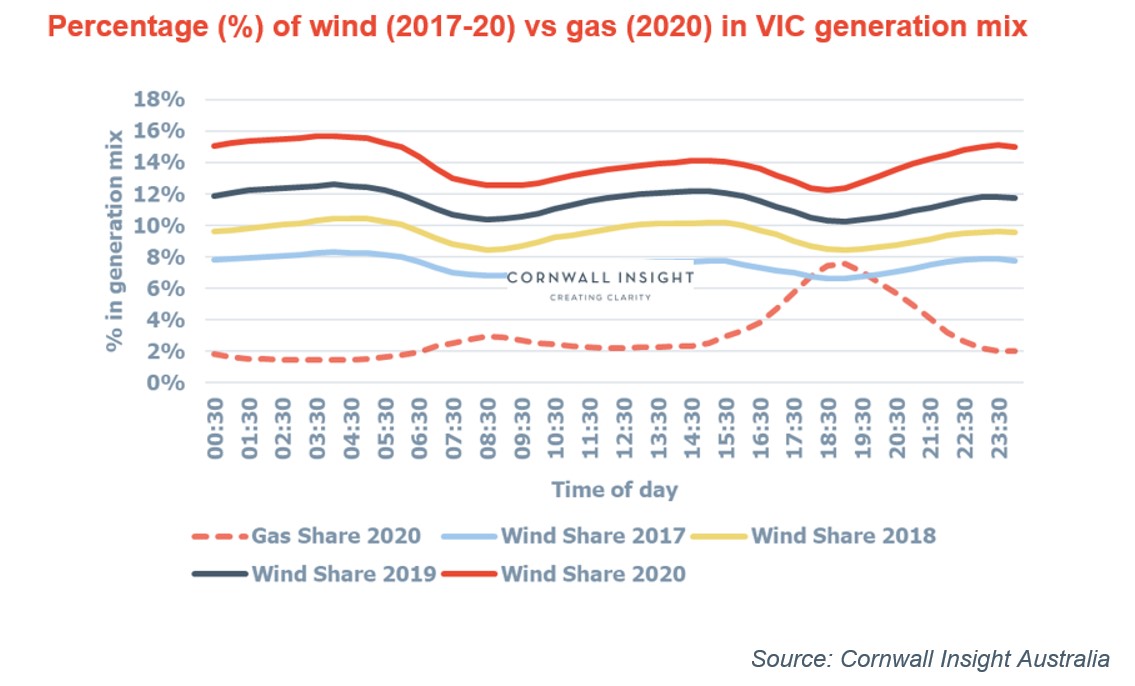 This phenomenal growth in output has significantly displaced fossil generation – especially gas. In the evenings (5 PM – 11.30 PM) – outside solar hours – gas contributed 5% to the state’s generation mix in 2020, whilst wind made up 14%. For the same time-of-day period in 2017, wind was 6% against gas at 9%.

Lumi Adisa, head of energy market analytics at Cornwall Insight Australia, said: “Whilst the displacement of gas by wind at night time is not particularly surprising, the shape of wind output in Victoria displays a unique characteristic; an afternoon bump. Victoria is the only state to show this remarkable shape and have wind contribute more to the generation mix in the afternoons (14%) than in the morning (13%).

“In addition, the overnight average wind contribution to the generation mix in the state (15%) was only 1% higher than the afternoon contribution (14%). Overall, wind in Victoria – specifically from western Victoria – has the most complementary market impact to solar in the NEM, making renewables in Victoria particularly impactful.

“This outstanding shape has also made wind in Victoria play a vital role in replacing the afternoon contribution (23%) from the retired Hazelwood power station and further impacting thermal generation.

“In 2017, gas and wind equally contributed an average of 8% to the generation mix in the afternoon. Fast forward to 2020, gas has dropped to 3% whilst wind has increased its afternoon share to 14%.

“These unique trends have fundamental impacts across the broader market through time-of-day pricing, constraints, and arbitrage value throughout the day.”

This article originally appeared on Power Engineering International and was reposted with permission.