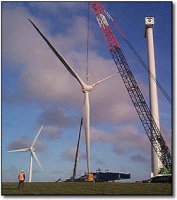 Tasmania, Australia [RenewableEnergyAccess.com] The second stage of the largest wind farm now operating in Australia was officially opened on the far north-west coast of Tasmania by Australia’s Minister for Infrastructure, Energy and Resources, Bryan Green.

Hydro Tasmania Chairman Peter Rae said the completion of Stage two of the Woolnorth wind farm brought it to the halfway stage with the total output of the project now 64 MW. “This is a significant milestone in wind energy development in Australia,” Rae said. “Woolnorth is a wonderful achievement. It is Hydro Tasmania’s flagship wind development and stands as a great example to the rest of the world of what can be achieved in the field of renewable energy.” The first stage of the Woolnorth development involving the construction of six Vestas 1.75 MW turbines was approved in October 2001 with work completed in September 2002. The 54 MW stage two development involved the construction of a further 31 Vestas 1.75 MW turbines. Work began in January 2003 with commissioning completed last May. Rae said the Woolnorth wind farm project was a partnership between Hydro Tasmania, businesses and the local community. He said strong local support for the wind farm was the result of Hydro Tasmania working through all stages of the development with a proud local community. “They understand the benefits it brings to their region and are also proud to be playing a part in reducing greenhouse gas,” Rae said. “Hydro Tasmania has always put the concerns of local communities at the top of the list when considering such developments and our relationships here at Woolnorth is evidence of this.” Rae said that 35 people were employed on the site during construction of the Woolnorth wind farm, and there had been significant on-going benefits for local companies in the region that have been contracted by Danish wind turbine manufacturer Vestas. Vestas has invested $15 million in the factory, which employs a further 83 people, and the company is now also exporting nacelles for wind energy developments interstate. “The Woolnorth project reinforces Hydro Tasmania’s role as Australia’s leading renewable energy business, both in the use of the most advanced technology and as a generator of 60 percent of Australia’s renewable energy,” Rae said. The wind farm is also performing up to expectations. “The average output from the wind farm has met or slightly exceeded our planning forecasts,” Rae said. “Stage 2 of the project was completed on time and within budget, coming in just under $100 million. Hydro Tasmania’s first wind farm was developed on King Island in 1998 and expanded last year. Hydro Tasmania has begun work on its first interstate wind farm at Cathedral Rocks in South Australia. This 66 MW development is a joint venture with Spanish renewable energy company EHN. Others are in the planning stage. Approval is currently being sought for Hydro Tasmania to build wind farms at Heemkirk on the State’s West Coast and Musselroe in the North East. Stage three of the Woolnorth project will be completed within the next two years.