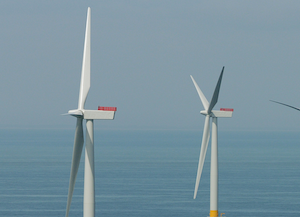 Untapped offshore wind is luring Japan’s biggest commodity houses to invest in projects in Taiwan and at home, buoyed by favorable government policies that support development of the clean power.

Mitsui & Co. this month bought a stake in the Taiwanese wind developer Yushan Energy Co. that gives the Tokyo-based company a 20 percent stake in a 300-MW offshore project that may cost $1.8 billion to develop. Mitsubishi Corp. is working with partners to build a separate wind turbine venture off Taiwan’s coast and Marubeni Corp. is developing two offshore projects in the northern Japanese prefecture of Akita.

“Asia is at the dawn of development of its offshore wind market,” Yoshio Kometani, chief operating officer of Mitsui’s infrastructure projects business unit, said in an email. “Taiwan is especially promising as it has favorable natural conditions and the government is taking initiative to improve investment and development opportunities.”

Buffeted by strong breezes in the Taiwan Strait, the island has emerged as a hot spot for clean power projects as President Tsai Ing-Wen works to phase out nuclear energy while adding 25 GW of renewable energy by 2025. The island is seeking to boost offshore wind capacity to 5.5 GW over the same timeframe, from just 8 MW.

In Japan, the government is working on legislation that standardizes offshore wind development guidelines and streamline the approval process for new projects. In March, the country’s Ministry of Economy, Trade and Industry updated its offshore wind map with more data on conditions and the agency is accelerating the environmental impact assessment process.

Globally, there are about 18 GW of offshore wind capacity and Europe accounts for more than 80 percent of that, with the rest mostly in Asia, according to Bloomberg New Energy Finance. Asia will add 3.5 GW of offshore wind capacity in 2030, more than double the 1.5 GW to be added in Europe the same year, according to estimates in a December report from BNEF.

To be sure, most of Asia’s offshore wind development is occurring in China, a place where historically Japanese companies have a small footprint. The world’s largest energy user is ranked third globally for offshore wind capacity with about 2.8 GW as of last year, after the U.K. and Germany, according to BNEF.

Japanese trading houses have been making moves into offshore wind in overseas markets for years, gaining experience to participate the coming Asia boom. Marubeni owns a stake in a project in the U.K. and Sumitomo Corp. owns parts of two Belgium and two other U.K. offshore wind farms.

“Offshore wind can be built larger and the bar is higher to enter the market compared with onshore wind,” said Keiji Okagaki, deputy general manager for Marubeni Corp.’s overseas power business. “Until now, Europe has been the leading market but there will be more opportunities globally, in Asia Pacific and North America, too.”