More
Home Blogs As the Wind Industry Advances, So Must the Practice of “Social Wind”

If you’re reading this, the odds are you’re on social media. That makes you part of the profound shift that social media is driving in the way people communicate, organize and relate to each other. That includes the business world, where social media is moving from being a necessary component of marketing programs to the essential component.

We’re not at that inflection point yet, but it’s coming. And, as cleantech marketers, we noticed that most of the smart thinking and best practice development in business social media is devoted to companies that sell directly to consumers – the “B2C companies.” That’s especially true for B2C companies with point-of-purchase websites, such as the marketing giant Amazon.com or our friends at the fast-growing on-line health food store, Thrive Market.

Social media for point-of-purchase B2C businesses is clearer. Run a marketing campaign, follow the click trail to a purchase, and there’s a strong set of metrics to show executive teams what’s worked (and didn’t).

Inventory the body of best practices for B2B businesses, and the party thins out. It goes down to a hush when it comes to how industrial B2B companies with complex, big-ticket products should use social media to drive sales, attract talent and investors, and win public affairs outcomes.

We couldn’t find any formal look at social media use in the wind industry, which we think has a unique set of needs as a popular, fast-growth disruptor of entrenched incumbents. To address that, we’ve released the first-ever study of social media use by 14 major wind companies.

In Social Wind: Who’s Doing What, Where We Can Go And The Marketer’s Case To CEOs For Why We Should Go There, we found: 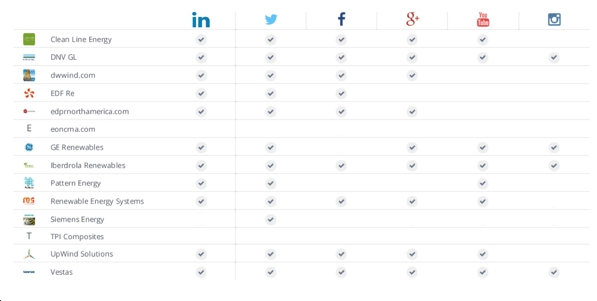 In short, we found that almost every wind energy company is using social media as a limited distribution channel. That’s understandable, because social is great for distribution as the first, highly targeted yet far-reaching platform. And there’s always the lure of social media’s lightning-in-a-bottle potential to go viral, organically attracting massive numbers of eyeballs with only a modest initial investment.

Yet most wind company programs are leaving on the table the real potential for social media… targeted engagement. Social media is definitely cheap distribution, though for all but a few (like the Federal Reserve), a distribution-centric strategy can’t hold audience attention. There’s too much content and too many voices vying for a finite pool of people’s attention.

In Social Wind, we make the case that the potential to gain long-term attention through social media lies in targeted engagement, with networks of people investing their time and attention in a company’s products, policies and successes. A well-designed engagement program can feed the sales funnel, support thought leadership and traditional PR, and drive public affairs outcomes. But that engagement only comes when social media is fully integrated into marketing, sales and PR, at which the distribution-only models fall woefully short. 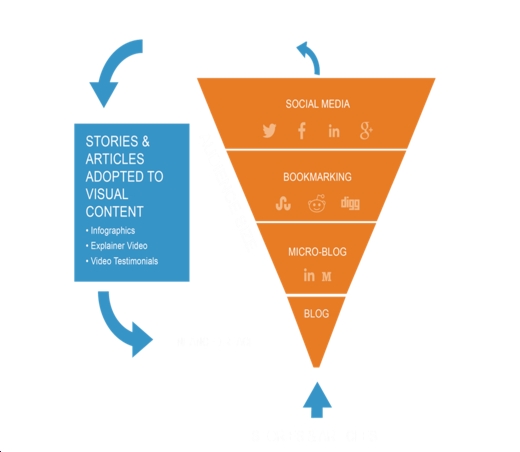 Many companies in other sectors are already engaging – see the ratings that Uber drivers and riders give one another. The trend toward engagement is underway elsewhere. You can already accessorize the Big Three auto model of your choice. It seems certain that in the future, the car companies will use the resulting data to decide which models to make at all.

And other industries are on the threshold: With half the daily newspaper reporters of 20 years ago, the news industry continues its financial slide because readers won’t pay the full cost of professional reporting. It’s being argued that news reporting’s most viable path is having readers choose what gets reported in the first place. You get the idea.

The point is that value-add engagement is only secured through a two-way conversation that matters. The buzz phrase is “democratized ownership.” It’s rare right now in high-ticket B2B sales, though the potential value remains. As we see it, that’s the challenge for wind industry marketers: How do we get in front of the new physics of business communications that demand real engagement, not just cheaper distribution? No one has that completely figured out yet, but even B2B wind companies with highly targeted audiences have a lot to gain.

Inequalities must be addressed to provide universal access to sustainable energy