The New Energy industries keep underestimating their growth. The most recent example is wind’s just announced unexpected 9+ gigawatts of 2009 installed capacity after predicting something more like 5 gigawatts in the face of the recession.

The solar industry expected to flounder in 2009 in the wake of the bursting in late 2008 of the Spanish bubble but surpassed its previous year’s installed capacity, setting a new annual record.

In contrast, the nuclear energy industry keeps predicting a grand “renaissance” in which it recaptures its 1960s and 1970s glory. Yet its actual new installed capacity is virtually nonexistent and its existing facilities are wearing out and leaking. What new capacity is being built, largely in the developing world, is offset by the decommissioning of decaying plants. Except the piling up of radioactive waste, for which there is still no safe solution, anything increasing in the nuclear energy industry besides hype is getting progressively hard to find.

The Future of Nuclear Energy to 2030 and It’s Implications for Safety, Security and Nonproliferation explains why. It validates what visionary energy guru Amory Lovins has been saying since at least 2005: Nuclear energy has a lot of problems and nobody is going to risk the enormous amount of money a nuclear plant costs with those problems unsolved, especially when New Energy and Energy Efficiency are relatively cheap, safe and offer comparatively prompt payoffs on the capital invested. ::continue:: 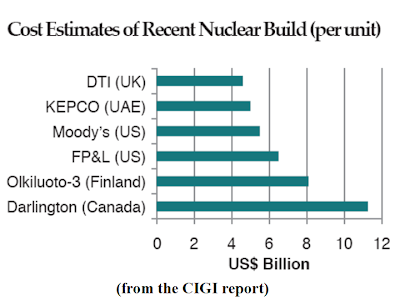 In 2006, CIGI set out to (1) estimate the nuclear industry’s progress through 2030, (2) understand the implications for nuclear safety, security and proliferation, and (3) make recommendations to strengthen global governance on nuclear issues. It drew on much research and an extensive survey of operating and planned nuclear facilities.

In its report, CIGI concluded predictions of a nuclear renaissance are “especially implausible” because:

(1) new reactors are a decade in the planning, approvals, construction and testing process;

(2) new and upgraded facilities will at best offset the decommissioning of the many aging ones,

(3) the cost and financing of new reactors is “profoundly unfavourable and…getting worse,”

(4) federal subidies and emissions policies are not strong enough and are unlikely to become so with New Energy, Energy Efficiency and even natural gas as much safer and more economic choices,

(5) after 60 years, the nuclear energy industry has still not resolved the radioactive waste problem (because burying waste in a hole in the ground is a solution for animals, not humans), and

After a summary of world nuclear energy development to date, and the lack thereof, the CIGI report concludes with a series of recommendations vital to nuclear expansion. The International Atomic Energy Agency (IAEA), increasingly central to global governance of the nuclear industry, must get increased funding and upgrade its regulatory practices, especially in the interlinked areas of safety, security and nonproliferation. The entire international community must acknowledge the IAEA’s central role and allow it to have the authority it requires. 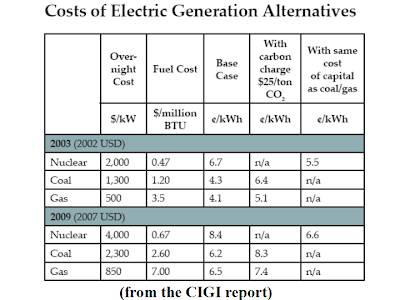 This post is based on The Future of Nuclear Energy to 2030 and It’s Implications for Safety, Security and Nonproliferation, Trevor Findlay, February 2010, CIGI