A distinguished brain scientist at one of the world’s great research and teaching institutions has often observed to NewEnergyNews that the people of this nation are not stupid, they are slow. But they will arrive at the core of the matter eventually.

This echoes the foundational belief of former President Bill Clinton, who reportedly believes passionately that when the people have the necessary information, they will always get a matter right.

The steady growth of small wind turbines is a case in point. Slowly but surely, the owners of small businesses and large residential properties are getting at the core of the energy issue and getting it right. They are slowly steadily moving to efficiency retrofits and distributed electricity generation such as small wind, rooftop solar and geothermal heat pumps.

As detailed in the AWEA Small Wind Turbine Global Market Study, released last month by the American Wind Energy Association, 2009 was another year of big growth for small wind. Yes, the recession had an impact, but, no, the marketplace did not lose sight of the fact that electricity prices are going to go up and having a private personal supply of it is, sooner or later, going to pay off. ::continue:: 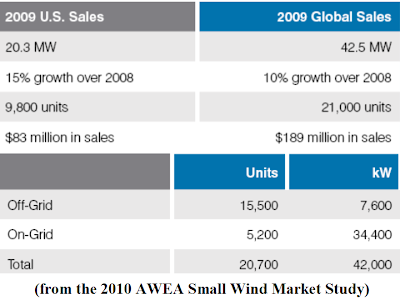 Small wind turbines are those of 100 kilowatts (kW) or less capacities. Small wind should be distinguished from the even smaller rooftop turbines and the much larger utility-scale turbines. Some 9,800 new small wind units were sold in the U.S. in 2009, a market growth of 15% (over 2008) that brought in $82.4 million. As a result, total U.S. installed capacity reached beyond 100 megawatts.

Momentum gathered through the New Energy boom years of 2005-to-2008. With 2009’s 20.3 installed megawatts, half of the total U.S. installed capacity was built in the last 3 years of the sector’s 80-year history. Small wind industry insiders say continuing 2009 growth in the face of the recession is partly attributable to sustained commitment to small wind by consumers and private equity investors and partly to new and improved federal and state incentives.

The international small wind sector also sustained its growth in 2009, buoyed by aggressive U.S. manufacturers. Two-thirds of the small wind turbines installed in the world last year (as well as 95% of those installed domestically) were built by U.S. manufacturers. The world’s 10% growth over 2008 added up to ~21,000 units, 42.5 megawatts of capacity and $189 million in sales.

There are now 250 companies in the world making small wind turbines. One-third of them (95) are U.S.-based. 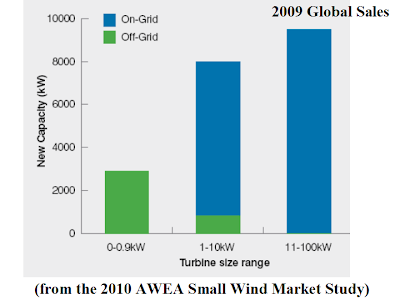