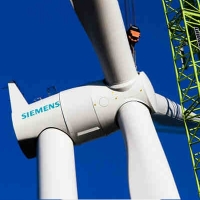 Brande, Denmark [RenewableEnergyWorld.com] Little over a year after Siemens erected its first 3.6-MW direct-drive “Proof of Concept” wind turbine, this November the company presented a new rather different 3-MW direct-drive concept. RenewableEnergyWorld.com was exclusively invited to the Brande HQ in Denmark to view the prototype and discuss the new turbine with Siemens CTO Henrik Stiesdal. A prototype was erected near Brande during the first week of December.

The first concept prototype was erected in July 2008 and a second in March of this year. The most important functional aspect of this “Proof of concept” test trial was exchanging the gearbox and generator of a conventionally geared 3.6-MW SWT-3.6-107 with a direct-drive generator. The concept turbine drive system also includes a rotating main shaft supported by two bearings, whereby the upwind rotor is located in front and the generator behind the tower.

Since the test set-up essentially includes only one main variable, a scientifically sound drive-system comparison can be conducted. Stiesdal said that these two machines have proved themselves faster than expected, including a high availability almost from day one and trouble-free operation of the generators with operating temperatures remaining favurably modest.

Stiesdal explained that the “main lessons learned underline the long process required from [the] ideas phase to a “Proof of concept” machine. Secondly, the optimization required cost calculation models that are not readily available.”

He said that the company “discovered that relevant and competent generator suppliers originate from ‘Design to Project’ practices, and not from parties focused at ‘Design to Manufacture.’ All of this took time to get aligned.

The new highly compact 3-MW IEV WC IA turbine features a 101-metre rotor diameter and a cylindrically shaped nacelle. Visually the turbine is characterized by a large prominent cooling radiator unit located at the nacelle rear, while the characteristic long and tapering Siemens nose cone has been exchanged for a substantially shorter solution.

A key conceptual difference with the concept turbine is that the annular generator has moved to the front of the tower. This direct-drive system layout is also taken from (earlier) turbine models that were developed by direct drive pioneers like Enercon and Vensys of Germany and former Lagerwey/Zephyros of the Netherlands.

The main structural element of this 3-MW Siemens direct-drive system is a cast main carrier accommodating eight yaw motors, whereas the generator and rotor assembly as a unit are bolted to its inclined vertical mounting flange. Furthermore, a hollow stationary main pin with the main bearings is an integral part of the generator assembly and provides easy (service) access to the rotor hub internal workings. Both the rotor hub and rotor blades originate from the 2.3-MW SWT-2.3-101 turbine model.

For this turbine Siemens worked together with partners to develop a new fully enclosed liquid-cooled permanent magnet type generator. Siemens Large Drives based in Berlin, Germany, provided the generator for the prototype but in the future there will be additional suppliers.

The electric machine itself is, in power-engineering terms, known as an inverted radial-flux generator. A key difference with “conventional” radial-flux generators is that the generator-rotor with its magnets facing inside now turns around the stator part. As a consequence this 2-plus-meter-long generator-rotor is directly exposed to the outside environment, and represents a substantial section of total nacelle length.

Stiesdal explained that there were a number of specific reasons for choosing the inverted generator layout: “Annular generators are by definition big in size, which puts high demand on structural component stiffness, and that in turn is necessary for guaranteeing a constant air gap retention between generator-rotor and stator.”

He further explained: “adding sufficient structural strength to the stator of a conventional generator by definition results into a substantial outside diameter increase, which potentially contributes to more complex transport logistics. With an inverted generator by contrast, ample space is available for adding stator support structure towards the centre. Our comparative concept analysis clearly showed that inverted generators can be built more compact compared to conventional radial flux equivalents.”

The compact nacelle cover with integrated lightning protection is further fitted with an onboard crane for easier heavy component exchange, including yaw motors, hydraulic pitch parts, etc. Components as well as people (in case of an emergency) can be lowered to the ground through a hatch located in the nacelle cover’s rear section. Main power electronics, including power cabinets, a full converter and a medium-voltage transformer, are all located at three levels in the tower foot similar to the 2.3-MW turbine series arrangement.

When asked why Siemens had chosen a new 3-MW class direct-drive turbine, Stiesdal commented: “Some initial findings indicated that the costs per unit of torque (Nm) decrease when power rating goes up and that at a 3.6-MW rating [the] break-even point seems likely. Our expectations were therefore that a direct-drive concept mainly offers a commercially viable alternative for large offshore turbines. However, we now have sufficient indications that the concept might also be feasible for the high-end high-volume market, and do hope that this machine will prove competitive with our 2.3-MW volume turbine series.’

Early in 2010 Siemens will begin an assembly-line system for the 2.3-MW and 3.6-MW series, the major benefits of which are expected to be substantially reduced assembly time per turbine and optimized factory floor utilization.

Another key issue Stiesdal explicitly addressed is what a direct-drive solution can offer in terms of added value to customers. He explained that all manufacturers “feel the heat” of press reports on gearbox failures, but also stressed that his company has successfully built geared wind turbines since 1980.

Stiesdal quoted the results of a 2008 survey on a substantial number of (former Bonus) turbines installed during the mid 1980’s in California. He said that even after more than 20 years, “96% of these installations were still running well.”  He also said that the systems were so reliable that the company was able to reduce service time from twice per year to only once per year.

So while it is evident that geared turbines will remain a reliable, competitive alternative for many years to come, it’s important to note that a switch to direct-drive reduces the number of turbine components by 50%. This will make it easier to convince customers of the long-term income stability on their capital investment not to mention that 50% fewer parts to handle also turns into a real cost advantage during high-volume turbine manufacture.

Siemens currently has more 450 of the upgraded 3.6-MW SWT-3.6-120 turbines on backlog. In the future Siemens will offer the new 3-MW turbine model for offshore applications, but only after successfully completing a rigorous product testing and optimizing period followed by a careful series production ramp-up.

Stiesdal said that, “at this moment it is far to early to elaborate on 3-MW series production timing, as we first want to see how the turbine performs in the field. That is the way we always did it, and know based upon these experiences that there will always be issues with a new turbine model, smart design concepts included.”