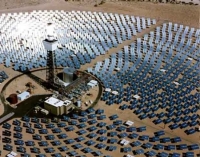 California, United States — The approvals for large concentrating solar power plants are coming fast and furious now. Today brought another good piece of news for BrightSource Energy, which got the go-ahead from the federal government to build a 370-MW “Power Tower” project in California.

The Ivanpah project, which uses fields of mirrors that concentrate light onto a central receiver, will be the first Power Tower project built on federal land in the U.S.

BrightSource’s project brings the total capacity of federally approved solar projects to 1,124 MW. Now it’s up to the companies to get moving on the projects so they can qualify for the Treasury grant program that expires at the end of the year.

As always, keep reading the site. There are plenty more announcements to come. With all of the developers rushing to get projects in the ground, it looks like 2011 is going to be the year of CSP.