2013 is poised to be an exciting year for alternative energy investors. Despite the conflagration solar had in 2012 we see opportunities there, as well as in wind and energy efficiency. This article also reveals why 2013 is shaping up to be a good year for the stock market in general, and alternative energy in particular.

The chart below shows the change in net profit margin from 2011 to 2012 for the largest solar companies. Performances were not stellar in 2011, only 12 out of the 13 companies turned a profit and the average net profit margin was just over $5 million. In 2012, however, only one of the companies posted a tiny profit, and companies averaged over $28 million in losses. I could throw up similarly downbeat charts for other measures of financial health, including earnings per share (EPS), price to book ratios, and sales growth. 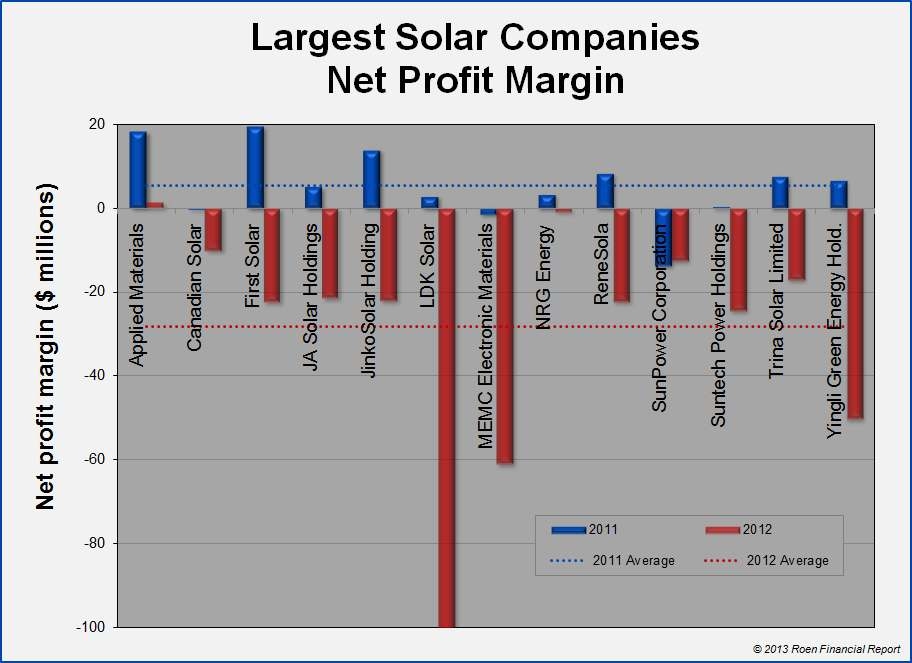 Even analysts’ projections for solar earnings have come way down. In 2011, the average EPS estimate for these large solar companies was a meager 0.57 one year out. In 2012, analyst EPS estimates dropped to a very negative average assessment of -1.72. Though depressing, this reality jived with my forecast at the beginning of 2012, where I predicted another year of rough sledding for solar stocks.

Despite the gloomy statistics, financial and energy analyst may look back at 2012 as the turnaround year for solar. Many individual companies (particularly the upstream photovoltaic (PV) manufacturers) are facing economic realities of oversupply and falling PV prices, which will ultimately lead to bankruptcies or mergers. According to IHS iSuppli Market Intelligence, the number of PV suppliers is expected to plunge by 70% in 2013. Those left standing, however, will profit immensely, since solar is a white-hat energy source that is likely only at the beginning of its long-term growth story.

It is very hard to pick winners and losers in this environment, so a broad collection of solar stocks is likely the best route for adventurous investors to take from here. One good option is a Mutual Fund (MF) or Exchange Traded Fund (ETF) concentrated in solar. For MFs, I currently like Guinness Atkinson Alternative Energy (GAAEX). Market Vectors Solar Energy ETF (KWT) also looks like a good value.

One of the fastest growing clean energy sectors is wind. The chart below shows projected growth of installed wind power in the three largest markets—the EU, North America and China. In 10 years, the amount of installed wind could more than triple from current levels, and in 20 years it could grow by 8 times! Moreover, this chart does not even include other important growth regions around the world. 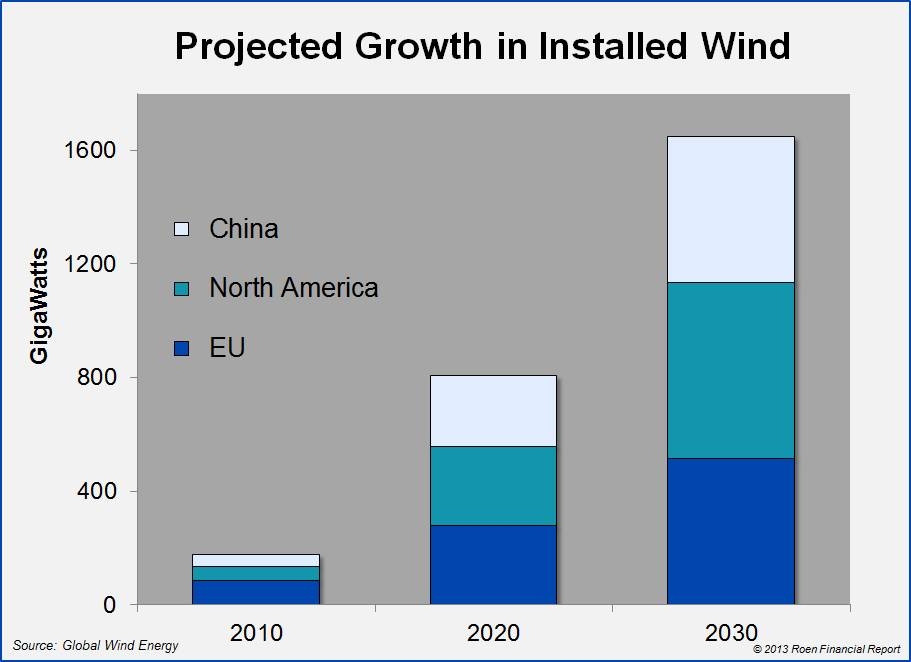 Another exciting and dynamic area in renewable energy is offshore wind, and the Obama administration is starting to move forward on this. According to the U.S. Department of Energy (DOE), the generating potential of offshore wind in areas with less than 100 feet of water equals the entire generating capacity of the U.S. electric system!

Bloomberg reports that at the beginning of January, the Bureau of Ocean Energy Management started to gage interest in offshore wind leases for 127 square miles off the coast of New York. Also, in 2013 the administration plans to conduct competitive lease auctions off the Massachusetts coast.

Since there are very few publically traded pure-play wind companies in the U.S., a good way to add wind to a portfolio is by investing in ETFs. Two good examples are First Trust ISE Global Wind Energy Index Fund (FAN), and PowerShares Global Wind Energy Portfolio ETF (PWND). Though these funds were down between 15% and 20% for 2012, they have bounced back nicely since their July lows. In fact, both funds are up in the 33% range since that time.

One of the most promising investment areas for 2013 may come from the area of energy efficiency. From an economic standpoint alone, smart efficiency measures that businesses and individuals can deploy have a short payback period, and many can bank immediate cost savings.

In 2012, Fidelity Investments featured energy efficiency as a “compelling investment opportunity.” According to Fidelity, global power needs are expected to rise 50% in the next 25 years, creating an increasing market for more efficiency lighting, engines and buildings.

Energy efficiency companies tracked by the Roen Financial Report have done extremely well in the past three months. Almost three quarters of stocks have been gainers, and 45 companies, or fully 20% of those energy efficiency businesses covered, have gained over 25% for the quarter.

Companies I like as long-term investments in energy efficiency include A. O. Smith Corp. (AOS) and Tetra Tech, Inc. (TTEK). AOS is in the commercial and residential water heating business, which has a strong balance sheet, excellent sales growth, reasonable debt levels, and its stock is considered undervalued in the high 60 to low 70 price range. TTEK is an engineering and management firm whose services include water resources, energy efficiency and carbon management. It is a very well-managed company with excellent free cash flow, but its stock is considered overvalued at current prices. If it dips to the mid to low 20’s, TTEK would merit a look.

I have no doubt that energy efficiency companies with good management and strong balance sheets will do well in 2013 and beyond.

Even though the Roen Financial Report does not follow big oil, we do track oil and natural gas prices very closely. As reported previously (Volume 3, Issue 12), the long-term prospects of solar, wind and other clean energy options are clearly tied into the cost of the prevailing dominant energy source, which are petrochemicals.

Until recently, oil was a commodity that traded principally on supply and demand, or on the perception of how supplies may be squeezed due to regional conflicts. In the past several years, however, oil prices have turned into a proxy for how traders believe the economy, and thus the stock market, will fare. The logic goes that the more economic activity occurs, the greater oil consumption will be. Since 2009, the price of a barrel of crude oil has been almost exactly correlated to the S&P 500 index. 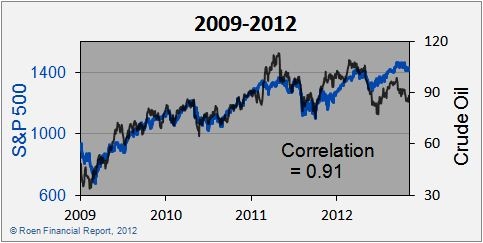 Of course, other factors will contribute to the price of oil in 2013. New drilling technologies are on the rise, giving life to what were thought to be unproductive wells, which will increase supplies. This increased production efficiency, though, has associated environmental issues. Also, the increased production will be more than offset by increased consumption, particularly by developing countries. For example, according to the International Energy Agency, energy consumption in China is likely to double in 10 years from 2008 levels, and triple by 2025!

Since I believe increased consumption will continue to more than offset increased production, I envisage that oil prices will continue to be pegged to the stock market. Because of this, domestic crude oil prices should rise slightly to the $100/barrel range by year’s end, but may peak out at $115/barrel at some point in 2013.

Alternative energy stocks do not exist in a vacuum, so it is important to look at the prevailing stock market trajectory in 2013. 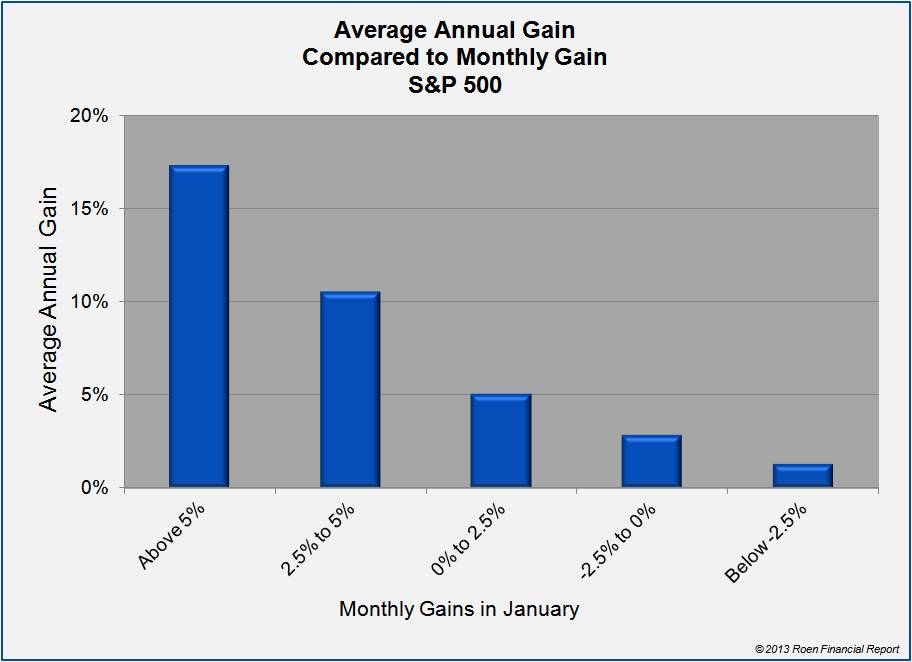 So far the stock market, as measured by the S&P 500, is up 4.8% since the beginning of the year, and is on track to have continued gains for the month. Even more impressive, alternative energy stocks are up 9.2% so far for the year on average. Even if you take out volatile penny stocks, gains averaged 8.1%. Considering this I feel all stocks, including the alternative energy sector, will have a very positive 2013.

Another reason I believe stocks will do well in 2013 is that the economy is improving. Unlike the gloomy years of 2009-2011, where a continuum of bad economic news was the rule of the day, 2012 revealed some financial bright spots. These include improved business sentiment, a turnaround in housing, and healthy stock market returns.

Also, companies are still primed for business investment. S&P 500 companies in total have over $4.2 trillion in cash and short-term investments on hand, a 4.2% increase from the previous quarter, and 6.6% above levels of the same quarter last year.

Another positive is that inflation remains low. The chart below shows the annual change in the core rate of inflation over the past 50+ years. Though there was a 2.1% jump in the past 12 months, the graph clearly shows inflation is well below the long-term average. A low inflation rate has always been helpful for the economy. 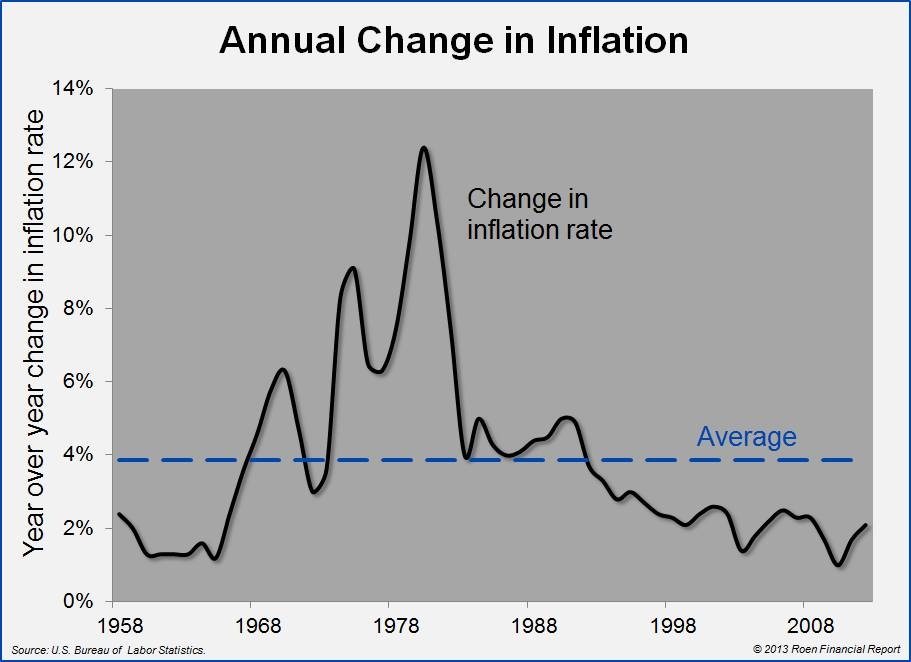 I believe inflation will remain tame, despite unprecedented amounts of government spending. The “Velocity of Money’ (the rate at which money flows through the economy) is still very low, and actually dropped in 2012. Unless this indicator picks up, we do not see excessive inflation coming any time soon.

The bottom line is that low interest rates and plenty of corporate cash will be a strong driver of stocks in 2013, including the growth industries within alternative energy.