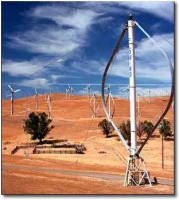 Alamada County, California [RenewableEnergyAccess.com] An Alameda County Superior Court Judge in California has ruled that a lawsuit filed against wind power companies that operate the Altamont Pass Wind Farm may proceed, according to the Bay-area newspaper, The Argus.

The expansive Altamont Pass wind power facility was one of the first major wind power developments in the country and includes over 5,200 wind turbines. The facility has come under fire for purportedly high levels of avian collisions between birds of prey and the wind turbines. A lawsuit filed last November by a number of environmental organizations including the Center for Biological Diversity, claims that wind turbines at the farm have killed an estimated 881 to 1,300 birds in violation with state and federal wildlife laws. The lawsuit alleges that “the failure of wildlife regulators to enforce laws protecting the birds gave wind farm operators an unfair competitive advantage.” The defendants, which include the Florida-based FPL Energy and California-based Enxco, had moved to dismiss the suit but Superior Court Judge Ronald Sabraw allowed the suit to move forward because “wildlife is part of the public trust, and the state hold the wildlife for the benefit of the people.” Altamont Pass has proven an unfortunate case for the wind power industry as it has contributed to public perceptions that bird kills are prevalent at other wind power sites across the country when industry sources say certain aspects of the Altamont Pass facility are to blame. These include the wind farm’s location in potential migratory paths and the prevalence of older wind turbines with lattice-style towers that afford ample perching room for birds. The wind industry says that detailed studies, and monitoring following construction, at other wind development areas indicate that this is a site-specific issue that will not be a problem at most potential wind sites. After consultation with biological experts and agencies, FPL Energy, which owns and operates most of the facility’s turbines, said it has taken a number of actions to reduce collisions including removing high risk turbines, perch guarding and participation in a rodent control program. FPL Energy, along with its partners and other turbine owners and operators at the wind power facility, said they are planning to institute an adaptive management plan. The plan will enable the companies to implement steps taken to reduce bird collisions with wind turbines as soon as all stakeholders reach consensus. Reaching that agreement, however, has not been easy. “An adaptive management plan is a flexible approach to dealing with the complex issue of bird-wind turbine interaction for which neither industry, government, nor other stakeholders have all the answers,” said Bryan Fennell, vice president of business management for FPL Energy. “We have been working with various stakeholders on our plan for more than a year and have been frustrated by the lack of progress, and the inability of the stakeholders to reach consensus on a reasonable program that presents the most environmentally and economically viable solution.” The company said it has already removed or taken out of service approximately 10 percent of the turbines it operates in the Altamont including removing 169 turbines and replacing them with 31 modern wind turbines and shutting down and either removing or relocating nearly 100 additional turbines in areas identified as having a high potential for interaction with birds. The company has also upgraded electrical protection measures on utility structures to better prevent the potential of raptor electrocutions from perching. “The turbine removal and relocation project and the upgrading of utility poles are just two of the steps in our overall plan and we want to do more,” Fennell said. “Due to the complexity of the issue and varying opinions on potential solutions, we believe buy in by all stakeholders on the remaining elements of the plan is critical to the plan’s overall success. Once we achieve that, which we hope is very soon, we will begin to implement other elements of the plan. Unfortunately, it seems our plan has been held hostage by the competing interests of various stakeholders. Avian issues at Altamont Pass are the exception to the rule according to Tom Gray, Deputy Executive Director of Communications for the American Wind Energy Association, when reached for earlier comment on the subject. “It’s important to make clear that the highly publicized problem in Altamont Pass is not representative of wind farms across the U.S.,” Gray said. “Wind farms do coexist successfully with wildlife in many other locations.”