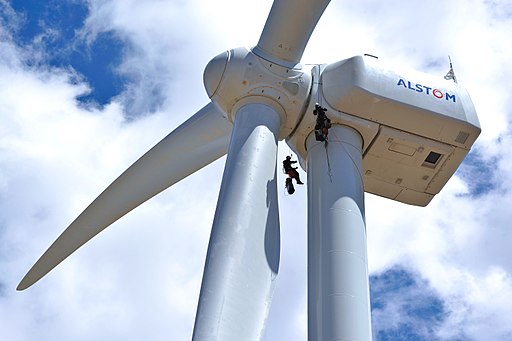 General Electric Co. will be required to buy Alstom SA’s stakes in three energy joint ventures for 2.59 billion euros ($3.1 billion), closing a lengthy chapter in the massive 2015 tie-up that has become a headache for the beleaguered U.S. manufacturer.

Alstom said Thursday that it will exercise its options to exit the renewable energy, grid and nuclear businesses that were created as part of the original $10 billion deal, which gave GE control of the French company’s gas-turbine operations. The transfer to GE of the joint-venture assets will occur on Oct. 2, according to a statement.

The redemption adds to the strain on GE’s resources as the Boston-based company grapples with weak cash-flow and slumping demand — especially for the kind of equipment it acquired in the Alstom deal. GE said in a February regulatory filing that it had already been informed of Alstom’s intent to exit the ventures this year.

Alstom and GE set up the units partly to give the French government a veto over some decisions in the nuclear-equipment business, which is considered strategic by the country because of its heavy reliance on atomic energy. The Alstom transaction was pushed through by former GE Chief Executive Officer Jeffrey Immelt after wrangling with the French government and a hard-fought battle against rival Siemens AG.

Since then, the market for gas turbines has soured. GE’s current CEO, John Flannery, has acknowledged that the company was late to recognize the slowdown in demand. In the latest blow, the manufacturer has fallen behind Mitsubishi Hitachi Power Systems and Siemens in winning orders this year. Both GE and Siemens are now cutting jobs and overhauling their businesses to weather the downturn.

The redemption lets Alstom tie up loose ends from the deal while shifting its focus to railway equipment. The Levallois-Perret, France-based company is trying to complete a merger in that business with Siemens’s competing division.

Under the terms of the agreement with GE, Alstom said it will follow through with its right to exit the renewable-energy and grid ventures during the “exercise period” between Sept. 4 and Sept. 10. Doing so will trigger GE’s option to buy Alstom’s stake in the nuclear business, according to the statement.

The changes won’t affect the day-to-day operations of the ventures since GE already had control, the U.S. company said in a separate emailed statement.