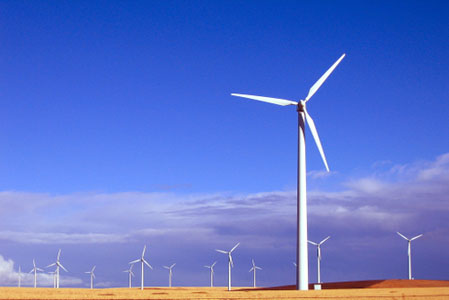 The Canadian Wind Energy Association (CanWEA) said Nov. 3 that a provincial leader in Alberta made a major policy pronouncement at the final day of the association’s 32nd Annual Conference and Exhibition in Calgary.

Alberta Minister of Environment and Parks and the Minister Responsible for the Climate Change Office, Shannon Phillips, speaking in front of a packed plenary room at CanWEA 2016, announced that the Alberta government is introducing the Renewable Electricity Act to legislate its target of 30 percent renewable electricity by 2030. Phillips also announced that Alberta will be proceeding with a procurement of an initial 400 MW of renewable energy as a first step towards meeting the target.

This was followed by a session delving into the market realities of high wind integration in Alberta, including the findings of CanWEA’s Pan-Canadian Wind Integration Study, which demonstrated how Canada can get more than one-third of its electricity from wind energy without compromising grid reliability, and at the same time dramatically cut emissions, save billions in fossil fuel costs and generate new export opportunities.

“By directly reinvesting costs from carbon pollution into renewables we expect to keep consumer prices low as we create the largest renewable energy market in Canada,” said Phillips.

“Canada’s wind industry is leaving this year’s conference energized and excited about the opportunities that are emerging as governments, utilities and consumers across Canada recognize that wind energy not only benefits the climate, but makes economic sense as well. Our job now is to continue to innovate, continue to improve our technology and lower our costs, and continue to advocate for forward-thinking policies that will make sure Canada gets its share of the billions of dollars of investment expected to flow into wind energy over the next quarter-century,” said Robert Hornung, president of CanWEA.

“Canada is home to the seventh largest wind generating fleet in the world, with more than 11,000 MW of wind projects delivering not just clean and cost-effective energy to consumers, but new jobs and investment to communities right across the country. As the country’s wind market expands to include a greater focus on the western provinces, those benefits will only grow,” said Jean-François Nolet, vice-president of policy and communications, CanWEA

Canada currently has more than 11,200 MW of wind energy, the seventh largest wind generating fleet in the world. More wind energy has been built in Canada over the last five years than any other form of electricity generation, with installed capacity growing by an average of 23 per cent a year over that time frame.

CanWEA is the voice of Canada’s wind energy industry, actively promoting the responsible and sustainable growth of wind energy. A national non-profit association, CanWEA serves as Canada’s leading source of credible information about wind energy and its social, economic and environmental benefits.

“This program is built on the recommendations from the AESO, who studied jurisdictions around the world to come up with the best possible program design in the interests of Albertans‎. This process will be competitive and transparent and will provide renewable electricity we need at the lowest possible price. The program will also complement the coal phase-out to ensure system reliability is maintained at all times,” said Margaret McCuaig-Boyd, Minister of Energy.

The successful projects will be privately funded and will result in new investment of at least C$10.5 billion into the Alberta economy by 2030, with at least 7,200 jobs created for Albertans.

The first competition will see investors bidding to provide up to 400 MW of renewable electricity. The AESO will gather feedback from industry on draft commercial terms starting on Nov. 10, and before the first competition takes place in 2017. Successful projects will be financially supported by reinvesting a portion of carbon revenues from large industrial emitters.

“As the AESO built our recommendations for government, we were keenly aware of ensuring that competitive outcomes drive the best result for the province. Reaching 5,000 MW of new renewable generation is a complex task, but we are confident we can reliably integrate this much renewable energy into the electricity system in a cost-effective manner by accessing the benefits of robust competition,” said David Erickson, President and Chief Executive Officer, AESO.

The Alberta government also approved the Climate Leadership Regulation, which provides details necessary for the administration of the carbon levy and exemptions for farmers, First Nations and others. Where possible, the regulation mirrors well-established processes for the provincial fuel-tax system.