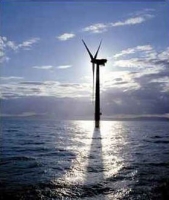 Boston, Massachusetts [RenewableEnergyAccess.com] As renewable energy enjoyed a bright moment in the limelight this week with President George W. Bush visiting a solar facility and the National Renewable Energy Laboratory, a darker item is lurking in the background as yet another Congressional attempt to block offshore wind power projects has been put forward.

The future of the Cape Wind project is now threatened by a “backdoor” legislative attempt from Alaska Congressman Don Young, according to Cape Wind Associates, the group of project developers behind the proposed 420 MW Cape Wind project off the coast of Massachusetts. Rep. Young’s effort would also delay progress on the development of any other offshore wind proposals, causing the American renewable energy industry to fall further behind its foreign competitors. Last week, Rep. Young distributed a five-page letter to colleagues in Congress urging support for an amendment he says he plans to offer in Conference Committee. “He’s only been talking to NIMBY opponents and his letter reflects that, it is one-sided and inaccurate,” said Cape Wind spokesman Mark Rodgers. “Making important energy policy that affects national security, the economy and public health is too important to be done behind the closed doors of a conference committee that avoids public hearings or the scrutiny of the full committees of each chamber,” said Rodgers. “This is coming at a time when members of both parties are talking about their commitment to reform Congress to make their work more transparent and to curtail the influence of lobbyists.” Cape Wind Associates have tracked this new piece of legislation; what is purely their perspective on the matter follows: The “Young amendment” was first reported in an article in the Congressional Quarterly on December 5, in which Young’s office denied its existence and called Cape Wind “paranoid.” In subsequent media reports, Young’s office mostly refused public comment or said little about what he was trying to do. “Up until now, Congressman Young has apparently been trying to conceal his efforts,” said Rodgers. Congressman Young is seeking to attach the amendment to the Coast Guard Reauthorization Bill in Conference Committee. The stated purpose of a Conference Committee is to “resolve differences” between House and Senate Bills, not to introduce new provisions that were not reviewed by either chamber, as is happening in this case. If the Amendment gets attached in Conference Committee, it is difficult to remove as both chambers tend to vote on important spending bills “up or down” with no changes. At the heart of Young’s letter and Amendment is a call to ban offshore wind farms within 1.5 nautical miles [1.15 statute miles = 1 nautical mile] of a shipping channel or ferry route. For comparison, the required buffer zone between offshore oil and gas rigs and shipping lanes is 500 feet. The entire justification offered for Young’s 1.5-mile ban is a recent report in the United Kingdom that identifies an approach on how possible marine navigation radar risks of offshore wind farms should be reviewed. Crucially, the UK approach calls for a buffer zone of 500 meters, about one-third nautical mile. The UK approach rejects a “one size fits all” solution and leaves it up to the UK Coast Guard to evaluate each project beyond 500 meters on a case-by-case basis. By contrast, Young’s Amendment would strip authority away from the US Coast Guard to review any offshore wind project, like Cape Wind, closer than 1.5 nautical miles to a shipping channel or ferry route by banning them outright. Young inaccurately claims his amendment is based on the UK approach but he has more than quadrupled the size of the UK buffer zone. Not surprisingly, Young’s Amendment is opposed by the Coast Guard. Young’s Amendment also brushes aside the experience in Denmark where an offshore wind farm near Copenhagen sits .25 nautical mile from an extremely busy shipping lane, and another offshore wind farm in the Baltic Sea is 1 nautical mile from the main channel that connects the Baltic Sea with the North Sea. These and other Danish offshore wind farms have had no reports of any problems with sea navigation. Don Young is the House Chair of the Coast Guard Conference Committee, key Senate Members that can defeat this amendment include: Stevens (R-AK), Snowe (R-ME), Cantwell (D-WA), and Inouye (D-HI).