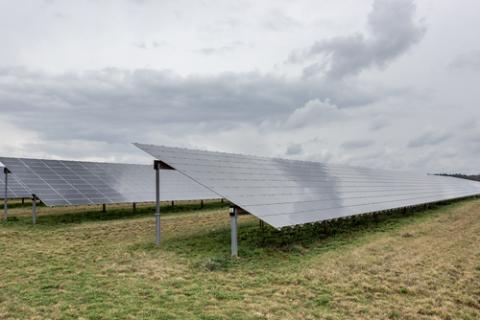 Second-quarter net income fell 17 percent to $636 million, the Swiss maker of grid connections and robots said in a statement today. The average estimate of 19 analysts surveyed by Bloomberg was for $701 million. The stock dropped as much as 2.6 percent in Swiss trading, valuing the Zurich-based company at 48 billion francs ($53 billion).

The worse-than-estimated earnings show how ABB is grappling with delays to complex renewable energy projects, adding urgency to restructuring measures as management works on a new long-term strategy. ABB Chief Executive Officer Ulrich Spiesshofer, who took over last year, has pledged to return the Power Systems unit to profitability after ruling out an exit from the loss- making business.

“We are working relentlessly on the execution of large offshore wind projects. The team is making good progress in the right direction,” Spiesshofer said. “We are taking decisive actions, de-risking the business model.”

Other European engineering companies have also struggled with charges related to wind and solar projects. German rival Siemens AG has posted charges of more than 800 million euros since 2011 relating to delays in linking offshore wind farms in the North Sea to the grid. ABB is the world’s no. 1 in power transmission, ahead of Munich-based Siemens and France’s Alstom.

As part of the turnaround, ABB’s Power Systems unit has ceased bidding for orders to design and build solar power plants.

“Whilst we are more confident that execution issues at the Power Systems division are being addressed, we are aware of the possibility of further execution charges until 2016, considering ABB is still working through the order backlog of offshore wind farm contracts,” Rob Virdee, an analyst at Espirito Santo in London, said in a note.

The stock was down 1.7 percent as of 11:17 a.m. in Zurich, making the company the worst performer today in the Swiss Market Index.

Losses from managing big-ticket offshore wind- and solar-power projects meant the Power Systems unit reported a $24 million loss in the quarter at an operating Ebitda level, a measure that ABB uses to assess profitability. In other divisions, operating profitability was stable or higher, the company said.

ABB could cut its exposure to Power Systems through a 50-50 partnership with another company, Credit Suisse AG analyst Simon Toennessen said in a note July 21. That would boost the value of ABB’s remaining businesses because of a larger share of profits from automation, he said.