Petten, the Netherlands — There are well over 30 different significant manufacturers currently delivering wind turbines rated at more than 1 MW and more than 130 different models of varying capacities. However, the main differences between turbines are found in the nacelle and more particularly, in the drivetrain. By modifying the layout, manufacturers try to improve the reliability and reduce costs.

In the ‘classic’ layout – which is or has been used by most manufacturers – the rotor is attached to a main shaft supported by two bearings. The front bearing is closest to the rotor’s centre of gravity, the second is located just before the gearbox. As an alternative, in a direct drive layout, a generator is rigidly connected to the rotor, either with or without a shaft and a direct drive concept does therefore not have a gearbox. Whereas in the classic layout normally only part a of the power passes through power electronics, with direct drive turbines usually all power generated is converted with power electronics.

To make maximum use of the wind, it has become common practice to allow the rotor speed to vary and the resulting frequency variation is compensated using power-electronics.

Wind turbines have several limitations, such as tip-speed. From a mechanical point of view, a high tip speed seems desirable as a higher rotational speed implies less torque. Gearbox architecture is determined by both torque and the rotational speed; the higher the torque, the larger the first stage of the gearbox will be; the higher the gearbox ratio, the more complex the gearbox. Thus, to make onshore turbines bigger, their rotational speed must come down (because of blade noise), increasing the torque. That means a higher gear ratio and a larger, more complicated gearbox. For offshore turbines noise is not as much of an issue so they could rotate faster – up to the point where aerodynamics limit the tip-speed.

Turbines and Their Features

Considering the current trend that is seeing a steady increase in turbine power, a number of commercially available machines are explored. However, some newer turbines or those still under development have not been included, such as the the Sinovel 3 MW, the Clipper Brittanica 10 MW and others. Nonetheless, the details of those considered does provide an overview of major design features.

Acciona follows the ‘classic’ design for its 3 MW turbine and has also opted to keep two main rotor bearings, whereas others in the same class combined one bearing with the gearbox. This design is aimed at reducing loads on the gearbox. Three sets of blades are available, two smaller options from LM and a larger Acciona-specific option.

The first turbine designed and built by Bard Engineering, the drivetrain was developed by Winergy. Specifically for offshore applications, given its fairly low rated wind speed (12.5 m/s) and heavy construction it may be expected to be up-rated to a higher power. The power electronics have all been placed at the bottom of the tower, reducing top-head-mass. The turbine’s size and mass makes it difficult to install on a monopile. Bard Engineering has therefore developed its own tripile concept, which basically consists of three monopiles and a 490 tonne crosspiece. Combined with a dedicated installation ship, Bard aims to install a turbine in two days. (See Bard image, below, right.)

The Liberty 2.5 MW contains a two-stage gearbox that splits the torque generated by the rotor over four medium speed axes. Each axis is then attached to its own permanent magnet generator. This allows the turbine to function at reduced capacity if a generator fails. Smaller generators are also easier 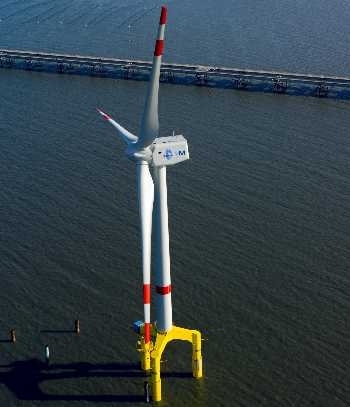 to handle and can be replaced using the on-board hoist. On the other hand, if the gearbox fails the generators do not produce any power and for many turbines the gearbox has been the biggest source of downtime. Nonetheless, other manufacturers are at least exploring multiple generators and Clipper has announced plans to build a 10 MW offshore version.

Like the Bard 5.0, Darwind’s DD115 is a 5 MW turbine that has been specifically designed for offshore. Unlike the Bard 5.0, it has a direct drive generator, which negates the need for a gearbox. There is only a single main bearing integrated into the generator and no main shaft. The generator is relatively small, possibly because Darwind uses a permanent magnet generator instead of an electrically excited system.

Where most variable speed turbines rely on power electronics to match grid frequency, the DeWind 8.2 2MW turbine uses two gearboxes, one of which has a variable ratio. This is used to keep the generator at a constant speed, while allowing the rotor to rotate at a variable speed. According to the manufacturer, this can actually save mass because the amount of power electronics required is far less. The variable transmission gearbox can achieve a ratio of 1:3 to 1:5.5 with hydrodynamic coupling. This design is also under consideration for the uprated Bard 5.0.

Ecotècnia follows a very similar design approach to Acciona’s AW-x/3000 in that it also uses a gearbox and doubly-fed, asynchronous generator. However, there are some differences. Most notably, the gearbox is claimed to be ‘fully separated’ from the support structure that supports the main bearings. The idea behind this is that the gearbox will then be subjected to lower, more predictable loads. (see lead image for article.)

Enercon was the first company to successfully adopt a direct drive system, though the particular design does result in a large and fairly heavy nacelle. The Enercon 4.5 MW E-112 first prototype was built in 2002. Since then it has been upgraded to 6.0 MW. Enercon supports its rotor on a shaft. The rotating part of the generator is located in front of the main bearing (other direct drive concepts can have it at different locations). Meanwhile Enercon has moved on in their development to the E-126, which has now been rated at 7.5 MW. Interesting to see are the divided, partially steel blades on the E-126.

GE’s 3.6 MW turbine was first introduced in 2002 as a turbine meant for offshore. The drivetrain is standard. Seven of these turbines were installed off Ireland to form the Arklow Bank wind farm, but a subsequent expansion was cancelled. More recently GE purchased ScanWind, developing a 4.5 MW offshore direct drive turbine.

A 5 MW offshore turbine halfway between the classic design and the direct drive employed by Enercon, on the one hand it avoids the large mass of the direct drive, on the other it still uses a gearbox, so has more moving parts. Using a tripod construction. Six Multibrid M5000s are now installed at the Alpha-Ventus offshore test site. (see image, above, left)

The basic layout of REpower 3.xM and 5M is standard. The 5M is designed for both offshore and onshore, while the 3.xM is only onshore. The 5M has been used in Thornton bank phase I and the Beatrice deep-offshore study. REpower is testing a 6 MW prototype turbine with the same dimensions as the 5M. So far using LM Glasfiber blades, REpower also has a joint venture with Rotec, PowerBlades for the MM92 and the 3.xM and is developing blades for the 6M.

Siemens also uses the classic layout for this turbine. Since developing this turbine, Siemens has extended the rotor diameter to 120m.  Siemens has also  developed   a 3.0 MW turbine with a direct drive generator. In numbers Siemens is the second most installed offshore wind turbine of 3 MW or more in operational wind farms, but first in terms of rated power. 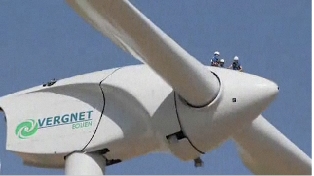 Unlike the other turbines examined here, this turbine by Vergnet is different in almost anything but the drive-train. The turbine is designed for installation without the use of separate large crane. Rather, it is its own small crane attached to the tower under construction and can assemble the tower and lift the first part of the nacelle. In this part a second crane is present that hoists up the second part of the nacelle and the two-bladed rotor. (image, right.)

The V90-3 places the gearbox directly against the rotor hub, alleviating the need for, and the mass of, a low speed shaft. However, problems occurred in the gearbox and the V90-3 was withdrawn from offshore sales in early 2007, but re-issued a year later. The new V112 reintroduced a low-speed shaft and the generator now sports permanent magnets.

Examining turbine designs reveals that pitch-to-feather with variable speed control is adopted almost universally. Nearly all turbines have three bladed, upwind rotors, though there are some exceptions. Most gearboxes for drivetrains using a generator without permanent magnets are three-stage gearboxes. Gearboxes for permanent magnet generators tend to have only two stages. Gearbox mass seems to scale nearly linear with power, while generator mass scales a bit less than linear.

However, one aspect that does not have a trend is the layout of the drive-train, which shows considerable divergence. The combination of medium speed, permanent magnet generators and low ratio gearboxes as well as variable gear ratio gearboxes and fixed speed generators are interesting alternatives to direct drive and the ‘classic’ drivetrains.

Wouter Engels is a researcher at the ECN centre of the Netherlands.