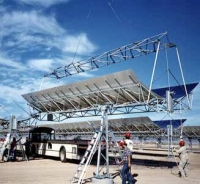 Boulder City, Nevada [RenewableEnergyAccess.com] This weekend, in the Desert outside Las Vegas, a major milestone was reached for renewable energy that could represent a shift in how the fastest growing region in the U.S. get its energy. Hundreds of people from around the world were on hand in Boulder City, Nevada, to commemorate the groundbreaking for the beginning of construction on the first Concentrated Solar Power (CSP) energy project in the U.S. in more than 15 years.

Called Nevada Solar One, the 64 MW commercial-scale solar energy plant will encompass 350 square acres, a nearly endless sea of mirrored troughs that will concentrate the strong desert sunlight and convert it into 750-degree F thermal energy, which can then be used to create steam for electrical power generation. A combination of state policies and support from both the Governor and the legislature, steady advances in this type of technology, all coupled with skyrocketing energy costs have helped make this unique project a reality. “Nevada has proven to be very forward thinking in promoting solar and other renewables,” said Solargenix President John Myles. “The main factor here is that you can get very large blocks of power coming from solar energy in one single location. It is very clearly the lowest cost solar energy that can be produced today.” The project is designed and led by Solargenix Energy, based in North Carolina, but involves a host of companies from around the world. The groundbreaking this weekend also made official a partnership between Solargenix and Spain’s renewable energy giant, the Acciona Group, which has acquired a 55 percent interest in the commercial power plant division of Solargenix. Gilbert Cohen, Vice President of Engineering & Operations for Solargenix, said the project costs somewhere in the range of $220-250 million. He said the power is slightly more expensive than wind power, but less than photovoltaic (PV) power, more commonly used in small rooftop projects on homes or businesses. Other sources close to the project put this price at somewhere between 9-13 cents per kWh. As more are built, however, and they’re scaled up even bigger, Cohen says a target of seven cents per kWh will not be difficult to reach in the near future.

The Nuts and Bolts of Nevada Solar One Germany’s glass specialists, Schott — a company familiar in the solar industry for their solar photovoltaic modules — is one of the primary equipment suppliers. In its first large-scale solar thermal contract, Schott is providing more than 19,000 of their latest vacuum tube steel and glass receivers, which in many ways can be considered the heart of the project. It is these receiver tubes that the parabolic mirrors focus the sun’s energy on and they, in turn, absorb the solar radiation. Flabeg, also a German company, will provide the mirror panels or troughs while industrial giant Siemens of Sweden will provide the 75 MW turbine. Many other companies are involved in other aspects of hardware and construction, including the main construction contractor Houston-based EPC, Phoenix-based Hydro, which is building the aluminum tracking frames that hold the mirrors. Israel-based Solel is providing some backup receivers in case there are any supply issues with the Schott receivers, according to Cohen. In all, as many as 750 people will be involved in the construction and the power plant will have a full-time staff of 28. Contrary to some press accounts, the project is not the largest of its kind in the world. Nor is it the first. There are, in fact, nine similar projects in the Mojave Desert in California — two of them 80 MW in size — that are operating above and beyond original expectations. According to experts involved in the project, however, there are subtle but significant changes made to this new version that will improve the overall efficiency and cost.

The older plants in the Mojave Desert, called SEGS, for Solar Electric Generating Stations, were different in a number of ways. Those plants required a 25 percent natural gas-fired backup to keep the heat transfer fluid temperature from fluctuating wildly. Nevada Solar One is designed to be more efficient in holding its temperature and requires only a 2 percent natural gas backup. More efficient and reliable motors will be used to move the troughs that track the sun. The frames for these troughs are now built out of lightweight aluminum instead of galvanized steel. The receivers themselves are different as well. Christoph Fark, global manager for sales and marketing for Schott’s solar thermal division, says the close to 19,000 receivers used in the project are the first commercial application of a new design from the company. The receivers must be designed to withstand the daytime highs of 750 degrees F and the lower temperatures at night. This can be particularly challenging to the seal between the outside glass tubing and the vacuum-packed steel receiver inside that holds the heat transfer fluid, a special synthetic oil. Fark explained how Schott invented a type of glass with the same thermal coefficient as steel so the two materials would react in unison to the constant temperature stresses.

These complex receivers are currently made in Germany but if CSP technology becomes a bigger player in the American Southwest, Fark suspects they could move some production into the U.S. “We see this as the beginning, we are involved in project discussion worldwide — such as the southern parts of Europe, the Mediterranean and the Middle East,” Fark said. “We hope the market picks up, and if so, then Schott is willing to invest in the production side in the U.S. This is our overall strategy, to be where the customer is. We believe the U.S. market offers huge potential for this technology.” The Right Place at the Right Time On a broader scale, Nevada Solar One reflects a symbolic rekindling of this technology approach, one that many experts say is particularly well-suited for areas like the American Southwest where sunlight is abundant but energy is precious and increasingly strained by population growth. “This is a technology the utilities are comfortable with, it has proven reliability, it lends itself to economies of scale, there clearly is still some room for price reduction, and also it’s a way to get large amounts of renewable energy deployed rapidly,” said Chuck Kutscher, Principal Engineer and Group Manager of the Thermal Systems Group at the National Renewable Energy Laboratory. “If we want to get serious about reducing carbon dioxide emissions and lower our use of fossil fuels, this is a way to quickly address that. I’m very optimistic about this technology.” A wide variety of factors have collided — everything from politics to the marketplace — to make this project a reality. “After many years the time has come where we don’t have to explain anymore the need for renewable energy, we don’t have to explain the concerns about climate change, we don’t have to explain the instability created by oil resources that belong to only a few countries when all countries are using these resources. Nor do we have to explain the instabilities to energy from disasters like hurricanes,” said Alberto De Miguel, Acciona’s Director of Corporate Development and Strategy. “Renewable energy is now accepted more than ever by the public.” And that public acceptance is increasingly being turned into policy. Nevada is one of a growing number of states with a mandate that electric utilities, in this case Nevada Power Co. and Sierra Pacific Power Co., source a slowly escalating percentage of their power from renewable resources. Eventually the two utilities will have to reach 20 percent renewable energy use by 2015. The law also contains a so-called “solar cut-out” that requires at least one-fourth of that power to come from solar energy. The project is projected to generate 130,000 MWh of power per year over the course of its decades-long lifetime. All of its electricity production will be sold to Nevada Power and Sierra Pacific Power under long-term power purchase agreements to help them meet this requirement. A Natural Fit for Tomorrow’s Market While Nevada’s policy played a very strong role in supporting this project, perhaps the next most influential factor is the natural gas market where prices have skyrocketed. This is at the core of why experts inside and outside of Solargenix believe CSP will play an increasingly important role in helping the rapidly growing American Southwest to meet its energy demands. “There are fundamental differences in the electricity marketplace versus 15 years ago,” said Rhone Resch, Executive Director of the Solar Energy Industries Association (SEIA), who was involved in the natural gas industry before joining SEIA. “Natural gas and peak power is incredibly expensive. Utilities are scrambling to find power generation sources that are reliable for peak power,” Resch said. “Those changes are going to be what drives new plants like this. The beautiful thing with this project is that it offers firm, dispatchable peak power.”

Resch said utilities and the ratepayers they serve made an investment in natural gas for the coming decades as a transition fuel but they are finding out now that it’s too expensive to afford. The power plants are fine, but the energy commodity is becoming cost prohibitive and coal is often the next best option. This is relevant and fortuitous for CSP technologies because natural gas power plants are not fundamentally so different than a CSP plant. Just as today’s fleet of natural gas plants uses a fossil fuel to create steam for a turbine, CSP plants like Nevada Solar One also create useable, commercial-scale steam, except only from the sun’s energy, a consistently free and available resource. “Except for the troughs, everything else is a standard natural gas plant,” said Scott Sklar, industry consultant with the Stella Group. “That’s what Solargenix has always maintained, you’re really buying a natural gas power block with solar attached. It can’t be that risky, after all the old SEGS plants have been up and have operated close to flawless.” In addition to the power plant side of the project being something the utilities and the traditional power industry is familiar with, Sklar said these types of projects can be easily deployed close to where the power is needed, unlike commercial wind power where the best wind resources are often not near where the power is needed. And while wind power may offer a slightly lower cost per watt than CSP, wind power generation is intermittent, whereas CSP offers consistent power all day long when energy demands are highest. “I dealt with this all the time, in the early days when Washington pundits and other people thought solar thermal would go nowhere,” Sklar said. “Or they would say ‘this stuff is great but it just isn’t in sizes big enough to matter.’ Well this is pretty substantive. It’s exciting and I think it will create a whole revival towards concentrated solar power in the U.S.” The project is scheduled to begin production of electricity in March of 2007.