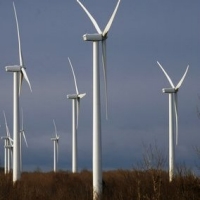 Washington, DC — With challenges continuing to plague traditional manufacturing sectors in the U.S., many observers are looking to new industries, such as wind energy, to revitalize the manufacturing base. The wind industry, in fact, has already done much to bolster such hopes. As the U.S. wind market has grown, so has the wind industry’s commitment to developing a domestic supply base and creating new American jobs, with employment growing seven-fold since 2005. Today, well over 240 U.S. facilities supply to the wind industry, and thousands of announced manufacturing jobs are in the pipeline.

But the news is not all good. While the potential for growth is significant, policy and market instability has left wind manufacturing facilities underutilized or even idle. In order to confront this issue, AWEA, the BlueGreen Alliance (BGA) and the United Steelworkers (USW) released a new report laying out the policies needed to grow U.S. wind energy manufacturing.

The report (PDF), titled “Winds of Change: A Manufacturing Blueprint for the Wind Industry,” includes information about the current status of the manufacturing sector for wind energy and provides a policy framework for increasing domestic content and American jobs. The pathway for growing U.S. supply chains is two-fold. First, the industry needs a long-term, stable market that will encourage investment and support demand for wind turbines; second, directed steps must be taken to support the manufacturing sector’s transition into the clean energy economy.

Signs of a Powerhouse

This extraordinary growth has increased manufacturing employment seven-fold, from 2,500 jobs in 2005 to 18,500 in 2009. The first components to develop domestic markets were towers and blades, due to the transportation and logistics issues associated with these large components. Today, the majority of towers and blades are made domestically. Moreover, today the U.S. is in the process of developing the capacity to assemble nacelles domestically; the number of facilities that assemble nacelles (i.e., the box-like structure that sits atop the tower and houses the turbine’s major machinery including the generator) will double in coming years, provided the industry receives the proper policy support.

The migration of nacelle assembly facilities here is meaningful not just in and of itself, for it will encourage development of domestic supply chains for high-value nacelle internals. Keep in mind that some 8,000 components make up a wind turbine. Adding to the sense of expectancy in the industry, it is estimated that there are 14,000 announced additional jobs already in the pipeline, awaiting the right policies to be put in place to come online—and with such policies, thousands of additional jobs could be created. However, the status of these facilities and new jobs is dependent on a largely unstable market.

From 2004 to 2009 the American wind market saw remarkable growth despite the lack of a clear commitment to growing renewable energy. However, the industry is now confronting another “boom and bust cycle,” with historically low installations in the first half of 2010. Policy support for the wind industry, which saw three years of crippled markets in the past decade thanks to inconsistent signals from Capital Hill, continues to fluctuate. As a result, the industry’s market outlook remains difficult to project in the absence of a national strategy to increase the market share of renewables. Unlike permanent tax credits and expensive government-backed insurance that support other forms of generation, the wind industry’s tax credit has been extended in only one-to-three year increments or is sometimes left to expire altogether before being given yet another short-term extension.

In this environment, justifying an investment to build a new manufacturing facility, or to retool an existing plant so that it can enter the wind market, is difficult if not impossible. For a firm considering opening a facility, there is no guarantee the U.S. wind industry will have a market past 2012.

For this reason, the top policy priority for enhancing American wind energy manufacturing must be the federal Renewable Electricity Standard (RES), which would require large utilities to attain a certain amount of their electricity from renewable resources, like wind. Setting a strong national target, such as 25% renewable electricity by 2025, would send a clear signal to the market that the U.S. is committed to growing the American wind industry. Such a policy can provide the market certainty necessary for companies to enter the wind industry.

In addition to a strong national RES, several other key policies should be enacted in order to provide a stable market. These include passage of climate legislation and extension of the American Reinvestment and Recovery Act’s (ARRA) convertible tax credit program. Also known as the 1603 program (the relevant section in ARRA), the provision prevented complete collapse of the 2009 market. Also needed to support a strong market is policy that fosters the modernization and further development of the outdated transmission infrastructure.

While the national RES and other key policies are needed to create a strong market by way of demand for renewable energy, a complementary suite of policies are necessary to support the manufacturing sector as many of its members transition into the industry in order to help feed that demand. Various incentive options need to be available to support the investment needed for firms wanting to open new facilities or retool or expand existing ones. First, the vastly oversubscribed “48C” advanced energy manufacturing tax credit (also an ARRA program) should be expanded and strengthened. The program, under which $2.3 billion in credits were announced in January, should be tapped again in 2011, this time for $5 billion. Second, the solicitation for the ARRA loan guarantee for commercial manufacturing in clean energy must be issued so manufacturers can take advantage of this long-delayed program. Finally, Congress should pass the Investments for Manufacturing Progress and Clean Technology (IMPACT) Act, which would create a $30 billion state-level revolving loan fund for facilities to retool.

In addition to these financing mechanisms, Congress should support the national export initiative through passage of the Renewable Energy Market Access Program (REMAP), a cost-sharing initiative under which trade associations can work with the Department of Commerce in export promotion. The Green Jobs Act, which will help provide funding to retrain workers for jobs in the clean energy sector, should also be fully funded at $125 million. This suite of policies will help ensure that American manufacturers can take advantage of growth in the wind energy market by entering the supply chain and employing American workers in good-paying jobs.

It is politically popular in Washington to talk about green jobs, but without action from Congress the wind industry will remain at a standstill. As the report from AWEA, BGA, and USW indicates, wind manufacturing facilities across the country are running below capacity, with sparse order books and unclear future demand. Small manufac- turing shops are looking for new industries to enter, but companies that could develop capacities for the wind industry are deterred by policy-induced market instability. Developing new supply chains and putting Americans back to work making wind components requires a commitment from the capital, and that commitment is urgently needed now. Around the world, governments are making their own commitments to clean energy and to manufactur- ing clean energy components; the competitiveness of the U.S. wind industry will be challenged by these emerging markets if America does not act to create supply chains and jobs.

Jessica Isaacs, the lead AWEA author on the report issued in conjunction with BGA and USW, is policy analyst at AWEA.